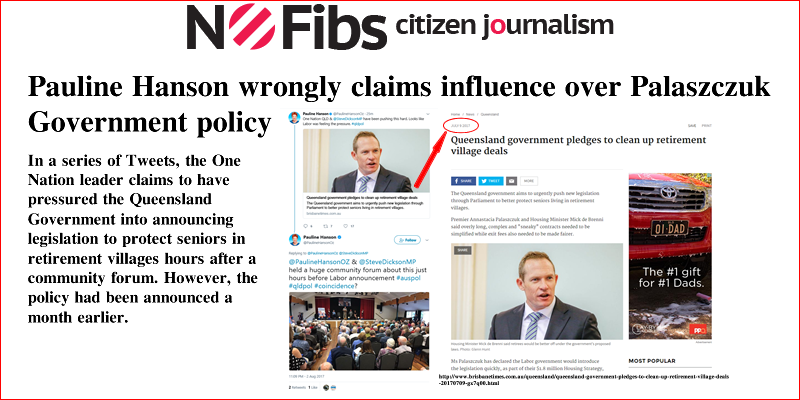 In a series of tweets, the One Nation leader claims to have pressured the Queensland Government into announcing legislation to protect seniors in retirement villages hours after a community forum. However, the policy had been announced a month earlier. 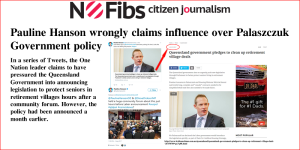 Senator Hanson followed up by praising Mr Dickson for ‘pushing this hard’ and claimed the Palaszczuk Government ‘was feeling the pressure.’ She linked to a Brisbane Times article entitled, Queensland government pledges to clean up retirement village deals.

One Nation QLD & @SteveDicksonMP have been pushing this hard. Looks like Labor was feeling the pressure. #qldpolhttps://t.co/iZ7snQmCn6

Senator Hanson followed up with a third Tweet boasting that the Labor Government had announced the policy without hours of the forum being held.

However, the article was dated a month earlier, July 9, 2017. It reported that, “The Queensland government aims to urgently push new legislation through Parliament to better protect seniors living in retirement villages.”

The government also noted that the legislation coincided with the joint Four Corners and Fairfax Media program, Bleed Them Dry Until They Die, which aired on the ABC July 3, 2017.

“The proposed laws come after an 18-month consultation period, which also coincided with a Four Corners and Fairfax Media investigation, which revealed exorbitant fees and complex contracts at retirement village company Aveo,” the article read.

Queensland Premier Annastacia Palaszczuk and Queensland Minister for Housing Mick de Brenni also released a media statement on July 10, 2017, entitled, Qld Government to strengthen consumer protection for seniors in retirement villages in which they set out the goals of the proposed legislation.

Premier Palaszczuk also stated that the government had been working on better outcomes as part of its Housing Strategy 2017-2027.

“My Government consulted widely over the past 18 months and it’s very clear that the rights of people who live in retirement villages just aren’t in line with the expectations of the community,” she stated.

“We must ensure our Queensland seniors can enjoy peace of mind in their retirement years, by giving them stringent consumer protections they need and deserve.”

Senator Hanson did not respond to media responses to her claim.

Alternatively, they have been working on them for at least 18 months.

You are trying to claim a policy today that was announced by the Palaszczuk Govt a month ago. You even posted the link to it. #qldpol pic.twitter.com/TDCXn2TU4W

Pauline Hanson has not responded to challenges to her claims and has continued to perpetrate her claims amongst the elderly.