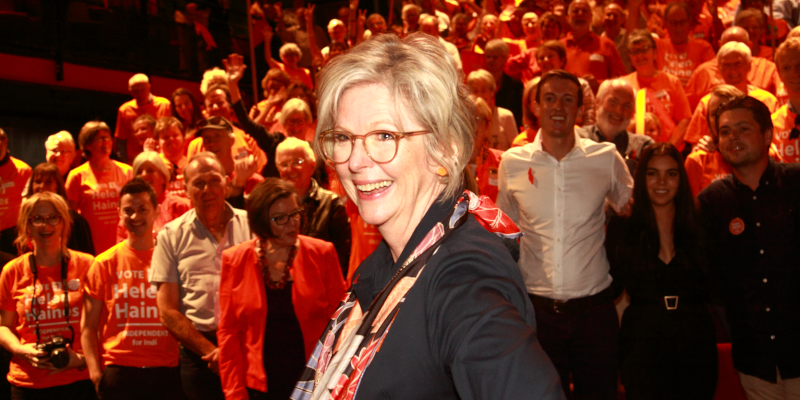 From the city to the bush, the Coalition is looking down the barrel at an electoral disaster of its own making, born from arrogantly refusing to listen to the voices in its electorates.

It remains to be seen how all the Independents poll on election day, but this election heralds a seismic shift in the political landscape.

The days of parties dropping would-be members of parliament into ultra-safe seats, especially rural ones, are well and truly over.

The former Liberal Member for Indi Sophie Mirabella, who Cathy McGowan (@indigocathy) defeated at the 2013 election had been parachuted in from Melbourne.

By 2013, community sentiment around Mirabella’s representation was that she was unapproachable, dismissive of differing opinion and only cared about her political trajectory and ideology and that of the hard right. There was a sense that she was the unofficial spokesperson for the Liberals’ far right.

She was not representing the diverse communities of Indi.

When Mirabella boycotted the apology to the Stolen Generations, that drove many voters of Indi into despair and shame at their local representation in Canberra.

It’s no accident one of McGowan’s first acts after becoming the Member for Indi was the delivery of an apology to the Stolen Generation, on behalf of the people of Indi.

The original concept behind Voice For Indi (now Voices For Indi @voicesforindi) was as a resource of community opinion and values for the representative in Canberra, regardless who that happened to be.

Mirabella was the catalyst for the creation of community group Voice For Indi and it wasn’t until after the community group’s infamous 11-minute meeting with her in late 2012 that they decided to back a candidate and ultimately McGowan.

In that meeting Mirabella suggested “… the people of Indi had no interest in the political process, their only interest is in the cost of living” — possibly true to some degree in 2001 — but by 2013 she’d ignited a political fire in the bellies of many Indi voters.

Highly successful Independent politicians are not new: Ted Mack, Tony Windsor and Rob Oakeshott spring to mind, each in their own way had/have strong ties into and delivered for their communities.

One of McGowan’s original promises was to do politics differently, to consult with communities, be respectful of differing opinions, identify areas of broad agreement and move those issues/ideas forward, and areas of disagreement keep the conversation going and seek compromise.

Political parties seek points of difference, they are combative and generally try to tear down opposing views.

The far right defines itself by what it opposes and defends those ‘battlelines’ with ferocity, refusing to even acknowledge different opinions.

In The Good Weekend, while addressing concerns by constituents about difficulties meeting with him, Abbott said:

I think you can be very confident that the people in question were activists posing as ordinary citizens.

Loaded labels such as ‘activists’ and ‘politically correct’ are applied to people with different opinions in an attempt to dismiss and discredit them.

In October 2017, Tony Abbott said climate change is “probably doing good” and he likened policies to combat it to:

Primitive people once killing goats to appease the volcano gods.

This is in sharp contrast to the way Voices For Indi does politics. After the 2013 election the group held a round of discussions and invited everyone, invitations were also sent to local branches of political parties.

All views were welcomed, respected and considered.

What was clear in her final speech to parliament was the deep respect and admiration people across the political spectrum have for her.

Respected commentators have suggested that without McGowan the Liberals will win the seat back. I have the deepest respect for the way McGowan represented Indi, but she is replaceable.

The Haines campaign boasts 1600 local volunteers, a substantial increase on both 2013 and 2016 — hardly a movement reliant on the personality of one person.

The Voices For Indi campaign is cash-poor but people-strong. The Liberal Party candidate backed by far right group Advance Australia is people-poor but cash-strong.

When McGowan made her maiden speech in parliament, a sea of orange travelled up the Hume Highway to share the moment — the moment belonged to them also.

In the six years that followed, the voters of Indi continued to follow McGowan up the Hume.

She started a volunteer program in the Canberra office, in part because an Independent doesn’t have the resources and organisation of a party, they have the community.

But the program is much more than helping in the office.

In her final speech, McGowan said 225 people volunteered during her six years in Parliament.

While they all took turns answering the phone, they also got to do some of the more interesting and exciting tasks in an MP’s office.

The volunteers were also encouraged to utilise parliamentary resources for their community, build contacts and networks, make appointments to lobby for the needs of their communities.

When refugee advocates were picketing McGowan’s office, she welcomed the community making their voices heard.

I travelled on one of the busses from Indi for McGowan’s final speech to Parliament.

There was a group of kids led by a young adult fresh from her teens and already in community leadership roles. The youngest was 11 years old.

This type of engagement in the political process by young people doesn’t happen by accident — young people across the electorate are standing to be heard.

At the recent Victorian state election, Jacqui Hawkins gave the Liberals a hell of a scare in the ultra-safe seat of, Benambra. Hawkins was one of the #IndiVotes 2013 campaign kids.

‘The Indi way’ is about encouraging engagement in the political process, reclaiming the voices in our representative democracy.

McGowan gave her final Parliamentary speech to a sea of orange because she was speaking about politics that came from the communities of Indi — grassroots democracy.

After the 2013 election there was massive interest in the result in Indi, not just from media but from voters around the nation.

Voices for Indi ran events where they shared the knowledge they’d gained.

One of these was #IndiShares which was attended by people from across the country. Some of these people are now involved in strong Independent campaigns threatening safe Coalition seats elsewhere.

Mirabella was the catalyst behind Indi reclaiming its collective voice in parliament, but the sentiment was the same in many electorates across the nation, especially rural ones.

The rise of rural grassroots Independents in this federal election is something those of us who’ve watched Indi closely since 2013 have been predicting.

It’s a rising that will continue beyond this election cycle and no amount of money the Coalition throws at it will make it go away: 1600 local campaign volunteers is a massive ground game.

In 2013, two weeks out from the election, I predicted McGowan would take Indi. In 2016 I first predicted she’d increase her margin by five per cent, then revised it down to 4.5pc when the Libs CFA scare campaign got traction.

This time I’m predicting Helen Haines will become the first Independent to succeed an Independent in the Australian Parliament.