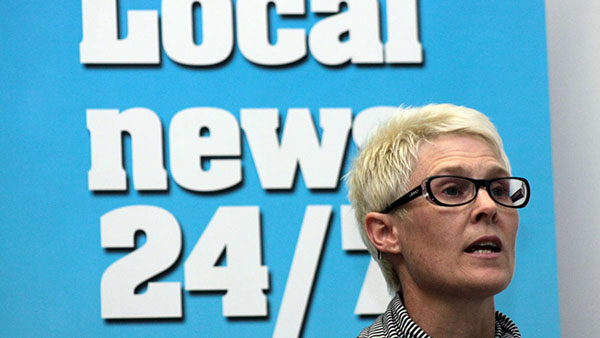 Despite some expectation that our sitting member for the LNP, Andrew Laming MP, would be a no-show like so many of his party colleagues across the nation, all candidates submitted themselves to questions from voters in the Redlands this week, in the Queensland division of Bowman.

The Cleveland District State High School Language Centre was a bit over half full. Bayside Bulletin journos, and me, were up the back tweeting to a wider audience via #bowmanpol, and, down the front, our candidates sat in a line which perfectly expressed their place on the ideological spectrum.

Stage left was Penny Allman-Payne for the Greens, rubbing shoulders with Darryl Briskey of the ALP. On the fence was John Wayne for the Palmer United Party, with Andrew Laming to his right. On the far right was, of course, Andrew O’Shea of Family First.

Unsurprisingly, no unusual territory was covered, and candidates employed all the public speaking techniques you’d expect.

Andrew O’Shea of Family First used the lectern as a pulpit, imploring us with Moses-like command to question that if we allow marriage equality, what would be next? He also made touching appeals for us to care for the needy, the addicted and the aged.

Certainly not boxed-in on the fence, John Wayne towered over the lectern, barely needing it. Penny Allman-Payne was the right height to lean both elbows on it, delivering with a focus that drew the listener. 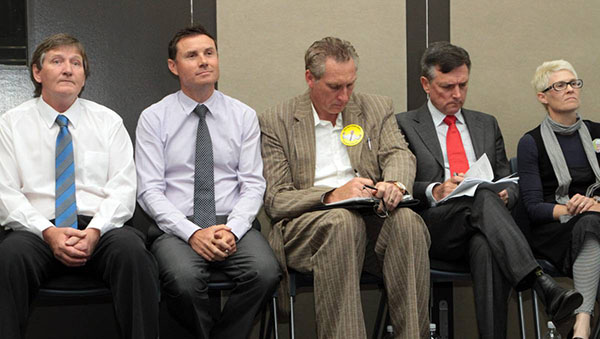 Andrew Laming showed a practised use of the lectern as a prop when punctuating his points. Darryl Briskey stuck behind it to the very end, before emerging in his final appeal to voters, exposing his front to a wall of LNP supporters ready to pounce.

Applause was generous and even-handed, even though the show was a tad routine.

But moments of theatre occurred, the best one a result of the night’s knockout question, which asked candidates to show their go cards (Brisbane’s Translink pre-paid bus, train and ferry ticket) and to name the cost of a train journey to the nearby city of Brisbane.

The candidates broke their ideological line-up and dived for their wallets. One needed his supplied from the floor by his spouse, one had to flip through credit cards to find the right one.

It was a glimpse of the candidates as people, without party gloss or prepared answers, and must surely have been a surprise from moderator Brian Hurst, editor of the Bayside Bulletin and The Redland Times. Kudos to him for not giving them that one in advance.

About halfway through, the penny dropped for me: a good candidates’ forum is Australia’s Parliament in microcosm. An effective moderator is like the Speaker of the House; the audience is like the flanks of party ministers; applause emulates the voting process.

If Bowman’s candidates’ forum were Parliament, interesting things would have happened.

Marriage equality would have been passed with a firm majority.

Paid parental leave would have been improved, but not to the tune of $5.5 billion annually.

Sand mining on North Stradbroke Island might have missed being sent for review, pending proper consultation with the traditional owners, the Quandamooka people, and due assessment of the environmental impact.

All opinions, thoughts and standpoints of those present would have been given a moderated hearing, although this local Parliament would have needed to be much savvier to attract youth, ethnic communities, women, people with a disability, and countless other groups lumped under the misnomer ‘minorities’ in order to represent all Redlanders.

Is it just a dream in the 21st century to have more voices giving more depth to our Parliament? If the supporters of the major parties are anything to go by, it seems to be.

Unlike their heroes, the political tragics were not seated according to ideology. The ALP cronies were down the front right, and the LNP worshippers, ironically, on the left. This was only apparent to me in the final 10 minutes of the night, when the major party candidates were wrapping-up, and some unattractive heckling burst from the mouths of Andrew Laming supporters.

I can see why they are in such a state, because they can taste victory. They feel entitled to it, because, according to them, they were kept from the reins by a pesky hung parliament.

I suspect Darryl Briskey’s supporters might have expressed similar barely concealed disenfranchisement had Tony Abbott been the cross-benchers’ choice in 2010, instead of Julia Gillard.

It’s amusing but disheartening to see white, privileged, well-fed, straight-looking adults expressing any sort of disenfranchisement in a place like Redland City. It tells me we have a very, very long way to go before our political system can even see the middle ground, let alone occupy it. 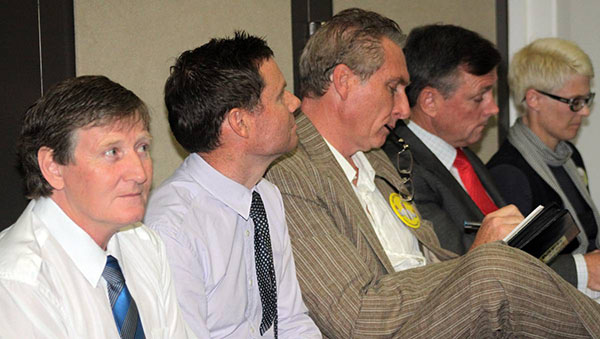 It’s a pitiable situation for Redlanders when we have Andrew Laming, the dominant figure on the Right, expressing an understanding of the needs of people living with a disability, and same-sex-attracted couples’ argument that church and state must be separated when it comes to relationship recognition, when his views are hamstrung by head office.

It’s a loss to locals to have the dominant figure on the Left, Darryl Briskey, choreographed by Kevin Rudd’s priorities, not dancing to his own tune.

It will be a sheer waste of talent to keep candidates like Penny Allman-Payne and John Wayne out of Parliament.

It will also be sad for Australia when the compassionate call to action that Andrew O’Shea demands of the political debate is heard no more, simply because he and those of his ilk cannot evolve their definition of what constitutes a family.

If only we could send them all to Canberra and pay them only if they work together effectively for Redlanders. I’d vote for that.