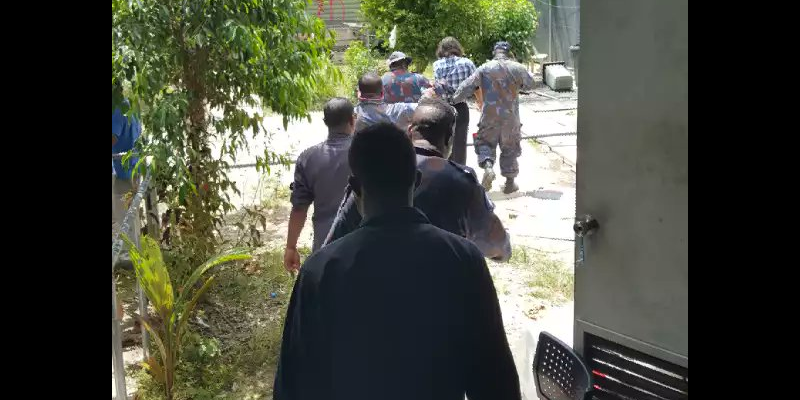 Peter Dutton stop propaganda against https://t.co/blgYw5Elt7 created this situation and you are responsible. You are lying to people that you built new accommodation. Those places are real prison, stop using ppl for your political benefits.

They are looking for me and Behrouz they found him but they are not going to find me. These are police are taking Behrouz. pic.twitter.com/G01bA46ETC

Behrouz has been one of the main sources of factual information about conditions inside the Manus Island detention centre for the past few years, and his reporting has been published in Australia and internationally

Without Behrouz’s courageous reporting at great personal risk, the world would be less informed about the crisis on Manus Island

Help us they are beating us pic.twitter.com/dMEZbr3kwU

Earlier in the day as tensions were rising there were reports two detainees collapsed and their need for medical assistance was ignored by police and immigration officials.

Throughout the morning refugees and their friends posted video and photographs of personal belongings that were destroyed by PNG police and immigration officials, including food supplies donated by concerned locals.

The mens possessions are being burned by PNG urged on by ABF. #auspol #Manus .@BehrouzBoochani pic.twitter.com/RHAjbmcq7P

More photos send to me just now from the men on #Manus of military destroying their food and water supplies, smuggled in by locals, churches and people of compassion. #sosManus pic.twitter.com/1xLgd0A3RA

Over 400 refugees detained at the (now closed) Australian regional processing centre on Manus Island have been refusing to relocate, saying they want freedom, not another prison.

Updates:
Amnesty International has called for the immediate release of, Behrouz Boochani story on Guardian Australia.

#PNG police Navy stoled All Things from The Mike Compound And They Took All things in The Cars, We Don’t Care About Propertys, We are peaceful people and We Need Justice, We Want Freedom In a Safe Country Not in PNG. #manus

This video explain to the whole world that Australian government gave an order to PNG Immigration and police to destroyed. Force us #Manus and arrest some of us #Manus #ManusIsland #ManusSOS #auspol #EvacuteManus #SOSManus https://t.co/pSdgVA4Gvc

I’ve just been released. They hancuffed me for more than two hours in a place behind the prison camp. The police commander yelled at me ‘you are reporting against us.’ They pushed me several times and broke my belongings. Will write more about it later.

Peter Dutton said they are number of refugees moved out voluntarily that s not true they have been forcibly removed by police& immigrations pic.twitter.com/eyu51RuALK

The police and immigrations have just left the center and the refugees are cleaning the center now everyone is depressed and scared. pic.twitter.com/upW1IT74f9

Police beat up some of the refugees and forced them to the new prison camp in East Lorengau, Hillside Haus and West Haus. I just met some of them who are injured. #Manus