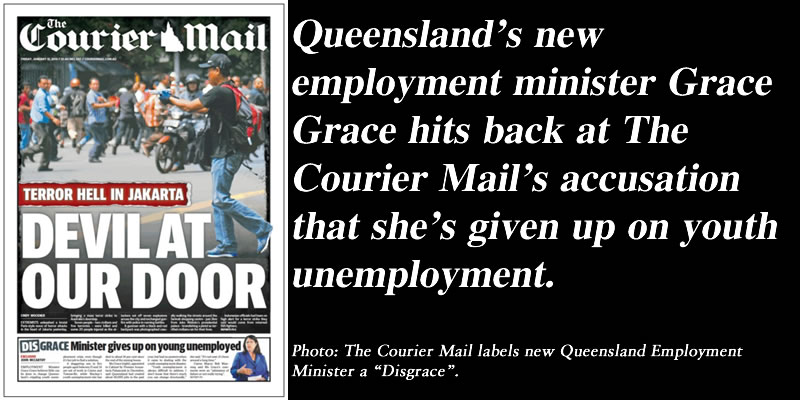 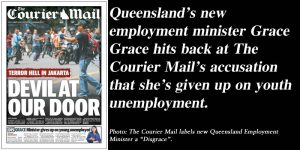 Queensland’s new Employment Minister Grace Grace has denied claims by The Courier Mail that she has given up on youth unemployment across the state. In a Tweet published on Friday night, a defiant Ms Grace said, “I will never give up on jobs for Qld young unemployed.” Ms Grace also stated that she was, “completely quoted out of context”.

Completely quoted out of context today on youth unemployment. I will never give up on jobs for Qld young unemployed.

It comes as an article by journalist John McCarthy was published on the front page of Friday’s edition of the newspaper which labeled the employment minister as a, “Dis-Grace”. Mr McCarthy wrote that, “Ms Grace yesterday said Queensland had created 60,000 jobs in the past year, but had no answers when it came to dealing with youth unemployment.”

He quoted Ms Grace as having said, “Youth unemployment is always difficult to address. I don’t know that there’s much you can change structurally,”’ she said. “There’s always an issue with youth unemployment. It’s not new, it’s been around a long time.””

Mr McCarthy’s article also went on to quote the reactions to Ms Grace’s comments as they were put to them from two of Queensland’s most prominent mayors.

Townsville Mayor Jenny Hill was quoted as saying, “At this stage, for anyone to say what Grace Grace said, that is not the attitude, you’ve got to go in there, you’ve got to keep prodding and keep hunting for opportunities, not just for Brisbane, but for the whole state.”

Cairns Mayor Bob Manning was reported to have said,  “It’s a bit like if you support a football team and you see them give in after 60 minutes of play when they’re 20 points down. That frustrates you doesn’t it? This is a bit like that.”

Queensland Opposition Leader Lawrence Springborg was quick to echo The Courier Mail by publishing a Twitter meme on Friday afternoon suggesting that Labor was holding the state back.

However, media and communications specialist Judi Jabour condemned the attack on Ms Grace and suggested that Mr McCarthy check his facts.

“Is that the truth, John?” she asked.

@Johnsmccarthy Is that the truth John? Or did you just write that for the @couriermail ? Check your facts buddy. #qldpol

The latest jobless figures for December revealed that Queensland’s unemployment rate fell to a new two year low of 5.9 per cent in trend terms and 5.8 percent seasonally adjusted. On Thursday, Acting Premier Jackie Trad  stated that she was pleased with the latest results.

Under the Newman Government, a national report in February 2014 revealed that youth unemployment had risen as high as 20.5pc in the hotspot of Cairns.