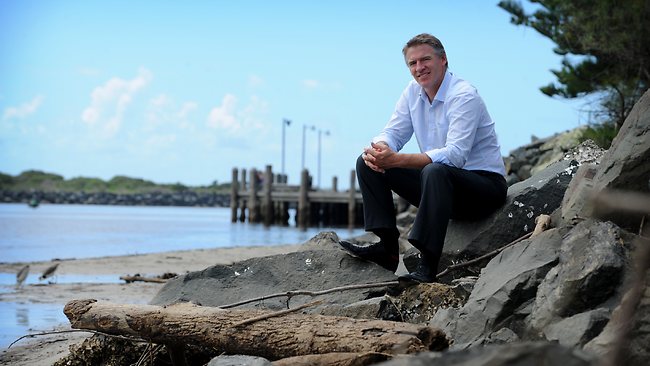 On September 7th, 2010, following an intense 17 days of negotiation, Oakeshott,  along with Tony Windsor decided to back Labor, enabling Julia Gillard to form a minority government. Oakeshott weighed up the situation in terms of what he considered would be best for his constituents and the nation as a whole. Stability, the NBN, climate change action and education reforms were big factors in his decision.

What followed has been three years of the most relentless, vitriolic, personal and savage attacks on Rob Oakeshott and other Port Macquarie residents.

In the weeks following the formation of the minority government, Ray Hadley used his radio program to personally attack editorial staff of the Port Macquarie News, a paper he accused of supporting Oakeshott.  Staff members were named regularly on his show – resulting in the hospitalisation of one employee due to stress.

Some quotes from Hadley’s radio show in the following months: Speaking to Tony Abbott on 11 March 2011

“She’s got the Cheshire cat behind her, Rob Oakeshott, and for God’s sake can you stop trying to be nice to him? No, honestly Tony, honestly. You know, your deputy goes up there and tries to break bread with him, just bugger him he won’t be a factor after the next election. The people who listen to this programme in Port Macquarie are sick to back teeth of the dope… For goodness sake, I’ve said this to you before, roll the sleeves up mate. Pretend you’re back at university with the headgear on. Get into ‘em. “

“But by the way they’ll get a chance, the people in that area, not of Lyne but the state seat of Port Macquarie to send a message there with his confrère Peter Besseling.”

In April 2011 Oakeshott  challenged Hadley to “step away from the kill-switch” and debate him in public. In response, Hadley labelled Oakeshott an “imbecile” but did not take up the challenge.

The NSW State election of 26th March saw a bitter battle between sitting MP Peter Besseling and the National Party.   Hadley then turned his attack directly on Besseling, a friend of Rob Oakeshott and also an Independent.  It also saw the birth of a three-day wonder newspaper called the Port Paper. Complete with news stories, advertisements, television guide and crossword, it looks like a newspaper but, with a fourth edition coming out today, there is no editor nor, in a time of election, any political authorisation. ‘‘I can’t say anything about who runs the paper,’’ said journalist Andrea Schulzer, who is listed as the news department contact. ‘‘I’m not at liberty to talk about anything.’’ Johns River resident David Shepard said the newspaper’s attacks on Besseling and Rob Oakeshott indicated it was a political pamphlet in disguise: ‘‘You just know it won’t come out after the election.’’  Meanwhile, broadcasting live in Port Macquarie, Ray Hadley praised the Port Paper as a fine journalistic publication.

Elections for a new Port Macquarie Council were to be held in September, 2012.  As soon as it became apparent that Peter Besseling would contest the election, Ray Hadley once again entered the fray, resulting in one Port Macquarie resident writing to The Independent (local free paper) Sep 20, 2012 – “I contacted Ray Hadley recently and asked when he was going to give up his continued criticism of Peter Besseling in the coming elections.”

In what has been seen as a softening of the anti-Oakeshott sentiment whipped up by the media, Peter Besseling was installed as Port Macquarie mayor much to the chagrin of Hadley.

In October/November 2012 an issue involving signage blew into a major incident involving the Port Macquarie Council and Ray Hadley.  This involved a truck with election signage for Nationals candidate Dr David Gillespie (best man at Tony Abbott’s wedding) and local Rotary Club signage.  The Council was contacted about their signage policy and this was passed on to the relevant department.  Ray Hadley then took up the cause.  2GB rang the Council requesting an on-air interview with either the Mayor of the General Manager.  They were told this would not be appropriate.

The next day, 23rd November Hadley exploded with an extraordinary attack on the Council and in particular the Communications Manager.  On Monday, 26th November Hadley resumed the attack this time naming the Communications Manager and calling her a “halfwit”, citing reference to her resume.  Council investigated defamation action and received a letter of apology from the local radio station manager.

It is not hard to  understand why Mike Carlton described Hadley’s program as “a temple of hatred”.

Apparently Ray Hadley intends to bring his Radio Program to Port Macquarie for the last few days of the election in September to “witness the demise of Rob Oakeshott”.  How he plans to traverse the Broadcasting Services Act 1992 remains to be seen.

Rob Oakeshott has been an outstanding MP.  He has worked tirelessly for the Lyne electorate and the minority government has seen more than $1 billion in federal grants for a multitude of projects –  health, infrastructure, education, support services, NBN and many more. In stark contrast the Lyne electorate was largely taken for granted under the Nationals for 60 years.

At the time of writing Rob Oakeshott has yet to decide whether he will stand at the next election.