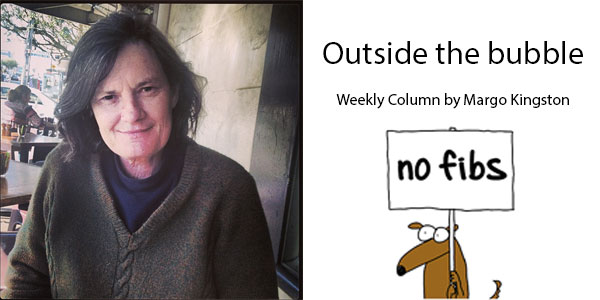 Nearly fifteen years ago, when I was a political journalist in Canberra, I tried to get posted to Bourke to report rural and Aboriginal affairs from the outside in. Now I’ll be covering the 2013 election from the Gold Coast with 20 plus reporters on the ground in seats around the nation.

No Fibs’ seats reporters are volunteers who live in the seats they cover, so they report as constituents as well as citizen journalists. It’s a pro-am team. Two volunteers are working journalists, one is a veteran citizen journo for indie media and another a final year journalism student. They join public servants, accountants, a teacher, a retired businessman, a farmer, a musician, a real estate agent, a PhD student and two geeks. A few more citizen journos’ seat scene-setters will be published soon.

As chief of staff in the Sydney Morning Herald’s Canberra bureau many years ago, I saw my job as trusting my reporters – keeping Sydney editors off their backs so they could pursue the stories in their rounds that they thought were important.

My approach has not changed as No Fibs editor. Apart from the scene-setter, I’ve told reporters it’s their space and their voice and they can file when they like on what they like. They control their coverage, so the people they speak to can be confident that the reporter is responsible for the piece delivered and that it will not be manipulated to suit the editor.

It can be lonely for reporters on the ground rather than in a newsroom or on the election campaign bus, particularly if they’ve never covered a story, let alone an election, before. To build a sense of community I’ve set up a private Facebook group so reporters can swap ideas, ask questions and read my ideas for stories and angles. All have agreed to read the work of their colleagues, and I hope that as policy is delivered and election issues break they can file reaction on the ground, giving readers a sense of how big picture themes are playing out locally.

No Fibs is a Twitter-based site and No Fibs reporters have twitter handles, so tweeps living in their seats are free to communicate with them and, I hope, help them out with tips, information and ideas. I hope each reporter will develop a local following to enrich their cover and that local media links up with them. In Kevin Rudd’s seat of Griffith, local online paper the Westender is publishing reporter Jan Bowman’s stories.

No Fibs reporters and I are committed to complying with the Media Alliance Code of Ethics. Errors will be corrected quickly and transparently, and so far all my reporters have been meticulous in ensuring they quote accurately and give all candidates a fair go. I’ve found their reports compelling. Authentic voices, a wide-range of styles and cover grounded in the place where they live is fresh air for this jaded political journalist, and I hope readers feel the same.

Most reporters want to interview all the candidates, so readers will hear much more from the multitude of new parties and independents than in other election cover.

Another difference in our cover is that we are covering safe Liberal, Labor and National Party seats as well as some seats in play this election.

A feature of our cover is the preponderance of seats in Victoria, a state largely ignored in recent national election coverage. We cover the three most marginal Labor seats in the State – Corangamite, Deakin and La Trobe – safe Liberal seat Higgins and safe Labor seat Lalor. We also cover two inner Melbourne seats where the contest is between Labor and the Greens – Wills and Batman – and Indi, a rural seat held by controversial Liberal frontbencher Sophie Mirabella but under organised, well-funded attack by conservative independent Cathy McGowan.

When this experiment began I crossed my fingers that we would hear from regional and rural seats so readers would get a taste of the many different democratic experiences of Australians. I was grateful that young journo Emma Kennedy’s editor at the North West Star in Mt Isa agreed to let her report Katter country for us. We are reporting the NSW regional seat of Eden-Monaro, and I’m expecting reports from Hinkler, a Queensland National Party seat, Page in northern NSW and New England, where Barnaby Joyce is set to replace Tony Windsor.

All up we will cover about 15 percent of seats in the election, with at least one seat in each State. That’s more than my co-publisher Tony Yegles and I can manage, and luckily former AAP chief-sub editor Julie Lambert has very kindly volunteered to edit and publish our citizen journalists reports during the election campaign.

No Fibs has partnered with Macquarie University on a research project on citizen journalism, and our seat reports are central to that research. I hope to write a book on the results of this experiment after the election, and to jointly author an academic article with project leader Professor Catharine Lumby.

I would never have imagined nine months ago that I’d have the chance to experiment with citizen journalism again. What happens in politics and on No Fibs over the next few weeks is anyone’s guess. I’m excited.