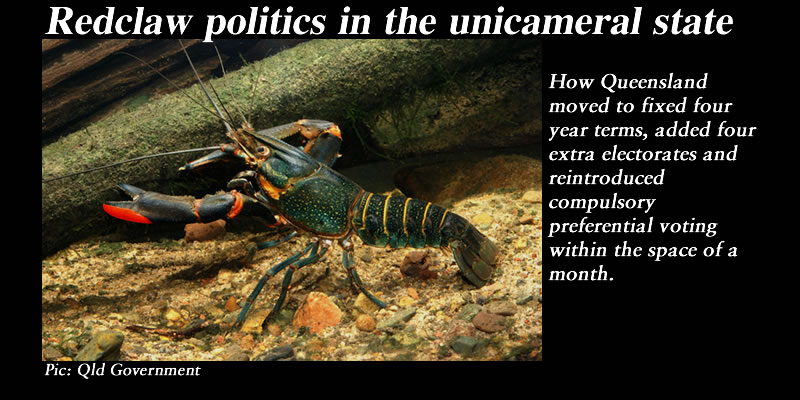 How Queensland’s electoral voting system was reformed within the space of a month. 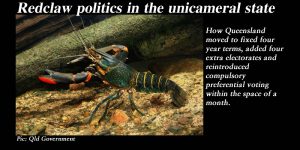 Call it a Coup d’état, a reform, an upheaval or the trashing of the legacy of the Fitzgerald Inquiry, Queensland now has a new set of election rules. The Queensland Liberal National Party’s (LNP) dogmatic quest for more electorates has led to the unexpected reintroduction of compulsory preferential voting (CPV) by Premier Annastacia Palaszczuk’s minority Labor Government.

The changes mean an additional four electorates will be created taking the total number of state MPs to ninety-three. Also, for the ballot paper to be valid, Queensland voters must number all of the boxes. It switches the system from optional preferential voting (OPV) which allowed voters to number as many boxes as they liked.

This change also shuts down the “Just Vote 1” election campaign which, tended to advantage the government of the day by exhausting the vote through OPV. Both Labor and the LNP have utilised the “Just Vote 1” scheme during the Peter Beattie Labor Government, the Anna Bligh Labor government, and most recently, the Campbell Newman LNP Government.

Both of the modifications will ultimately join a March public referendum amendment taking Queensland to fixed four year terms from the flexible three.

Commentary on the way in which the modifications were conducted in the unicameral system have been wide and divided.

A staunch opponent of the fixed four year term, political lecturer at the University of Queensland, Professor Graeme Orr, condemned the moves as, “Naked, Red Claw Politics, proving 4yr terms minus upper house a joke. Government trumps LNP on election law”. He also told The Courier Mail that, “clearly, we were promised a different style of government and we didn’t see that last night.”

Brisbane Times state political editor Amy Remekis wrote, “From a democratic point of view, it was a disgrace. As a political manoeuvre, it was pure genius.”

ABC state political reporter Chris O’Brien opined it as, “a shambolic way of overhauling our political system which needs to be addressed.”

However, Griffith University’s Dr Paul Williams said the change to CPV should lower the informal vote rate at federal elections.

“A lot of Queenslanders erroneously think ‘I just vote 1 for the House of Representatives because that’s what I do at state level’,” he said.

ABC election analyst Antony Green confirmed that CPV would have given Labor an extra nine seats at the 2015 election but condemned the way in which the change was made by stating,“in my view making such a major change to the state’s electoral system unannounced and at short notice is exactly the sort of slip shod legislative behaviour that the single chamber Queensland Parliament has been criticised for so often in the past.” 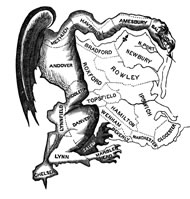 The first gerrymander: “Printed in March 1812, this political cartoon was drawn in reaction to the newly drawn state senate election district of South Essex created by the Massachusetts legislature to favor the Democratic-Republican Party candidates of Governor Elbridge Gerry over the Federalists.” Source: Wikimedia Commons.

Queensland’s gerrymander electoral system had been abolished after the 1989 anti-corruption Fitzgerald Inquiry report recommended an Electoral and Administrative Review Commission (EARC) be establish. A British practise from the early 19th Century, the gerrymander came to prominence in Queensland under the reign of former National Party Premier Sir Joh Bjelke-Petersen. It had helped him remain in power for nineteen years by re-shaping the size of electorates to match the population of his party’s support base.

Historically, redistributions in Queensland favour high population growth regions such as Brisbane, Gold Coast and the Sunshine Coast over those of low growth or negative population ones. The latter tend to occur in the rural areas which are traditionally home to LNP and Katter’s Australia Party voters. Due to the cap of eighty-nine Queensland electorates, redistributions can see a seat taken from the outer regions to create one in South-East Queensland. The remaining regional voters are absorbed into an existing neighbouring electorate.

Not wishing to see his seat of Mount Isa enlarged, KAP MP Rob Katter began campaigning for more seats at the beginning of the term of the Palaszczuk Government. This would hopefully prevent additional seats being created in the south at the expense of the north-west.

The logistical difficulties in covering an electorate the size of Spain were demonstrated in a report by ABC journalist Blythe Moore during the 2015 state election. The fear was that successive future redistributions would one day result in Mount Isa spanning from the Gulf of Carpentaria in the north to the New South Wales state border in the south.

Brisbane Times political editor Amy Remeikis explains the passage of the bill for 93 MPs and CPV.

Two previous bills to increase the number of MPs had failed to pass earlier in the parliament.  However, KAP were now in an unique position to combine their efforts with the LNP and enlist the support of independent MP for Cairns, Rob Pyne. Pyne had recently fallen out with the Palaszczuk Government and resigned from the Labor Party to join KAP & independent MP Billy Gordon in the crucial crossbench voting bloc.

In a surprise move in the Tuesday morning session of parliament the LNP’s Shadow Attorney-General, Ian Walker, launched an urgent motion to debate the “Electoral (Improving Representation) and Other Legislation Amendment Bill 2016”. The urgency flag meant it would bypass the parliamentary committee process. With KAP and Pyne’s support, the Palaszczuk Government had no choice but to accept a vote on the bill for the Thursday night session.

In political terms, the outcome would likely see an additional seat or two created for the LNP and would prevent loss of seats in the outer regions. Opposition Leader Lawrence Springborg was also out to prove he could control the parliament from opposition. Although it had been bipartisan, Springborg claim the success for the fixed four year term referendum.

“We were able to deliver it in opposition,” he’d claimed in March.

On the day before the vote, he confidently told ABC Radio Brisbane that it would be “a remarkable achievement” for the LNP to get the representation bill through from opposition. During the day, Springborg had also repeatedly taunted Palaszczuk by proclaiming she had lost control of the parliament and her government.

Just before the dinner break on Thursday night, the Palaszczuk Government accepted defeat on the bill. The door was now firmly closed on public consultation but it was the start of a strategy by Palaszczuk to show that she was still in control.

LNP Member For Hervey Bay Ted Sorensen slurs his way through the debate.

After the dinner break, Attorney-General Yvette D’Ath rose and delivered an amendment to the bill to restore CPV. The paper had been circulated in the House only eighteen minutes earlier and the opposition scrambled to absorb the amendment. Observing the debate, Amy Remeikis described the desperate situation the LNP now found itself in.

“By moving an amendment to the LNP’s bill, the government doesn’t have to send it to committee for review, or open it up to consultation. Instead, if it has the numbers, the government amendment becomes part of the LNP legislation, which has already passed. The LNP is now in the position of having to vote down its own legislation in the third reading, having just voted to pass it, ” she wrote.

The government remained largely silent as LNP speaker after speaker was thrown up to oppose the amendment as the leadership courted the vote of the crossbenchers on the floor. However, the government had clearly done its homework and a panicked LNP motion to adjourn the debate was voted down.

LNP MP for Mudgeeraba Ros Bates rose and described the move as, “the most disingenuous act of corruption and bastardry”.

LNP MP Beaudesert Jon Krause quoted former Australian Labor Prime Minister Gough Whitlam in concern for D’Ath’s soul, “Well may they say ‘God save the Queen’, because nothing will save this Attorney-General.”

“The people of the bush are looking to them (the crossbench) – and of course Her Majesty’s opposition – to tell this government to put this amendment ‘where the sun don’t shine’,” said LNP MP for Whitsunday Jason Costigan.

The motion to block the amendment by the opposition was defeated by 45 noes to 41 ayes. As a consequence, an ashen faced Walker stood and read the bill for the third time.

“I move, that the bill, as amended, be now read a third time,” he proclaimed.

It had been her Labor predecessor Premier Wayne Goss who had switched the state to OPV but Premier Palaszczuk had said nothing throughout the debate. She later commented that the change would be ‘a good reform’ for Queensland.

A shocked Springborg linked the situation to the Fitzgerald Inquiry which, perversely, had railed against his political ancestors. He accused Palaszczuk of trashing the Fitzgerald principles, denying voters a choice and of trying to rig the next election.

Asked on ABC Radio Brisbane on Friday if his own political maneuver to increase the number of seats had blown up in his face, Springborg answered with a sombre, “No. No it didn’t.” He maintained that the bill had to go through to stop the outer regions being cannibalised.

Still reeling on Saturday, Springborg begged for the government to take part of the bill back to the consultation stage.

“The government can advise the Governor not to proclaim the bits to do with the change to the voting system. That’s easy to do, because it has not been proclaimed and it has not been implemented. There is time for this government to say ‘OK, we’ll now go and consult the people of Queensland’,” he said.

However, in a Tweet, Professor Orr said it would not be possible for the executive to veto parts of a bill and suspected that there was little chance of the government agreeing to delay the proclamation at Springborg’s request.

The blood, teeth and claws of Queensland’s unicameral parliament had been on display. It showed that Queensland was still living in the shadow of the Fitzgerald Inquiry where political party self interest still dominated and nothing is certain. Springborg has already begun talking about switching back to OPV.

Yet to the majority of Queenslanders, the changes will probably go unnoticed. They’ll need to number all of the boxes on the state ballot paper as they presently do for federal elections. Some may eventually find themselves in a brand new seat with a new MP. After the next state election (probably 2018), they’ll find themselves voting in October of every fourth year.

For the LNP, they’ll likely pick up two new seats, one on the Gold Coast and one on the Sunshine Coast. Labor will benefit from a greater direction in preferences flows. A seat such as Glasshouse held by the LNP’s Andrew Powell which has a high population of Greens supporters (14.4pc of the vote in 2015) could see a big change.

For the man in the hat, Rob Katter, his electorate is unlikely to expand in the short term but he’ll still have the task of covering his vast electorate.

As for Tony Fitzgerald QC, with his name either invoked or cursed over the course of the week, he remained relaxed telling the Brisbane Times, “They’re all just self-interested politicians and I’ve sought refuge from them in a zone of total indifference.”

I am waiting 4 Tony Fitzgerald to attack Labor's abuse of Parliament. I suspect my wait will be a long long one. #auspol #qldpol #hypocrite