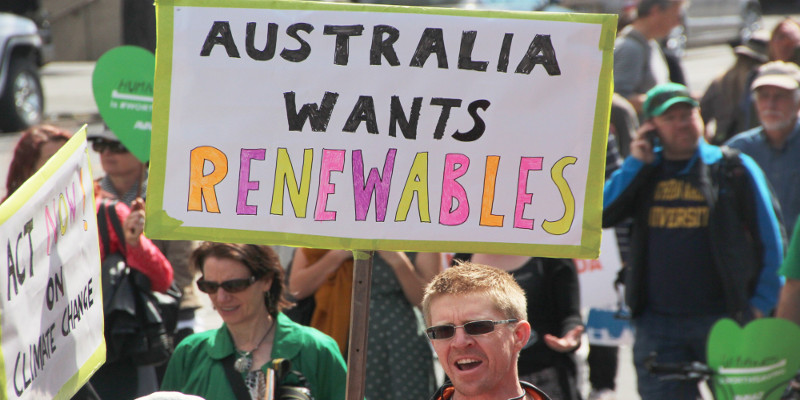 It should come as no surprise that the Australian public enormously favours development of renewables. This is seen not only in public opinion polling on the issue, but also the rapid take up of roof top solar presently on 1.4 million Australian homes.

Recent opinion polling (21 July, 2015) by Essential Research on renewables finds that 50 per cent of Australians think that the Federal Government should prioritise support for the renewable energy industry over the coal industry. Ony 6 per cent favoured priotising coal industry, and 28 per cent thought both industries should be treated equally.

Even amoung coalition voters 39 per cent favoured renewables to 14 per cent for coal, and 28 per cent equally.

Survey questions for the public opinion poll announced 28 July examined voter opinion on the Impact of the carbon tax on electricity prices, and whether electricity costs had increased over the last 12 months since the repeal of the carbon pricing scheme.

While we can clearly see removal of carbon pricing has resulted in a clear trend for carbon emissions from electricity to soar, especially from Victorian brown coal generators, Tony Abbott’s promise of an electricity bill price reduction of about $550 annual price reduction appears to have not washed with voters experience.

I think most people are aware that the retail and distribution companies have been gold-plating the transmission system which has been largely responsible for the electricity rises in recent years. This is a problem caused by poor governance and management of the electricity sector which the present Federal government is not addressing.

Q. Do you believe that the carbon tax, before it was repealed last year, had a big impact, a small impact or no impact on electricity prices?:

Prime Minister Abbott is fond of saying his government had a mandate from the September 2013 election to ‘axe the tax’ and that the election was a referendum on the carbon price and Australia’s policies on climate change. But elections are won and lost on many issues.

The government had no a mandate for repeal of carbon pricing, and replace it with a token ‘Direct Action’ fund, when you investigate the climate related question results of the massive votecompass survey conducted during the election, and other opinion surveys which show enormous support for renewables and for action on climate change. I explained this in detail in my November 2013 article on Australian Public opinion on carbon pricing and climate change.

The Government has consistently wound back climate action policies including one of it’s first acts being the closure of the Climate Commission, Energy Efficiency Opportunities program repealed, appointing climate denial businessman Dick Warburton to undertake the RET review, Australia showing it is a climate leaner, not a lifter in international forums, budget cuts to science programs, to list but a few.