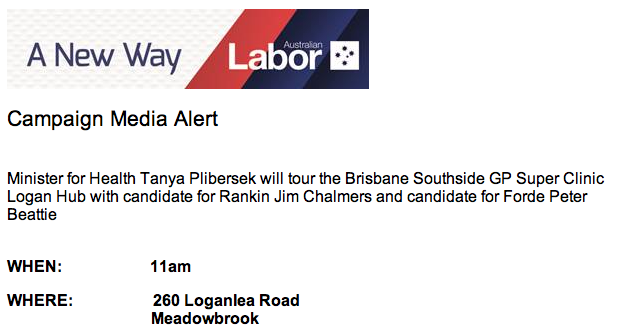 I stare at it, wondering for the umpteenth time why the major parties give local media no more than an hour’s notice on these events – even though I know full well it’s to avoid a hijacking by local activists and/or lunatics and/or mavericks from the opposing team.

And I know full well why they don’t trust the media with the information. Because sideswiping the event by alerting any or all of the above is much more entertaining for readers/viewers/listeners and than a standard noddy from the local candidate and, in this instance, the federal health minister.

I stare at the message in the inbox, umming and arring about whether or not to go to Logan – and decide to ignore it.

And the self-examination begins. Why am I ignoring it? Because I’m at risk of covering more ALP events than events for any other candidate.

Besides, I’ve got other things to do – why should I drop everything and run from the south-east corner of the electorate to the north-west at the whim of a tight-fisted election campaign head office and a local staffer who doesn’t have the courtesy to give me the heads up?

That doesn’t silence the self-cross examination – LNP candidate Bert van Manen and his campaign are ignoring me completely, although to be fair they did offer me ‘a few minutes’ after a candidates’ forum last week (which I declined for the myriad reasons outlined above and below – I’m holding out for 20 minutes).

Should I therefore withhold coverage from the ALP, who are at least willing to include me on their mailing list? Or punish the ALP because the other non-incumbent candidates, while open to responding to my requests (with the exception of Rise Up Australia’s Jonathan Jennings – which reminds me, where is Jonathan Jennings?), are not proactive in contacting me? . . . or don’t have a plethora of federal ministers or a prime minister to drop by and support their campaigns.

These are the conversations of a hardworking, disgruntled mind.

The superficial dance between media and politics makes me want to curl up in a ball and weep. Yes, truly. Curl up because nothing in me wants to play a pre-ordained role in their charade, and cry because it leaves our public political landscape so . . . boring, bereft and worse . . . without heart . . . lacking courage, conviction.

I have worked in both arenas, danced both roles. And in both instances the idiotic phony posturing has for years driven me to distraction.

It’s blah. It’s serious blah. It’s cowardly. It’s pretentious. It’s an insiders’ game that excludes everyone, on both sides of the fence, who is not them.

Last week the foreign minister was in town. I went along because I knew I could have fun with the appearance of the Australian foreign minister in a Beenleigh chocolate shop. ALP candidate Peter Beattie noticed me hanging back from the media pack (if the small media presence in Forde could be considered a ‘pack’). I declined his invitation to join them. I didn’t tell him I had no interest in asking the foreign minister anything, anything at all. Nor did I tell him I had no interest in asking him anything, anything at all. There’s nothing either seasoned operator is going to say in 30 seconds that a) cannot be googled, b) has not been rehearsed and c) the electorate hasn’t already heard ad nauseum. (Beattie’s staffer offered me ‘a few minutes’ after the event, which I declined. Beattie himself invited me to ride with him on the campaign trail one day this week – now we’re talking . . . although I have yet to get this through to the staffer).

The mindlessness of poli-speak is a primary reason I left mainstream journalism – the political landscape is so barren, so predictable, so meaningless in its communications that there is no longer any need to waste time interviewing most everyone in politics, business or environmental activism when one already knows what they’re going to say.

So why, in the end, did I decide to go to the Logan GP Super Clinic?

1. to present a public face for No Fibs to political operatives and others in the community; and

2. to have a hook onto which to hang these thoughts.

Today the Federal Health Minister Tanya Plibersek is in town. To inspect the new GP Super Clinic. I ask her adviser if he has a media release outlining the new clinic’s specs – he assures me it will be emailed out later, ‘when head office has approved it’.

Two hours later I don’t have it and I’m not following it up. Besides, I already know what it’s going to say. It’s going to be about the Health Minister specifically rather than the people it was built to serve. It’s going to be full of numbers that are meaningful only to the economically numerate and that I, chronic contextual innumerate, am unwilling to parrot. And it’s going to be loaded with platitudes that any one of us could write in our sleep.

The health professionals of Logan are genuinely delighted to be hosting the minister. The Minister is genuinely apologetic to the women whose exercise routine in the gym was interrupted by the television crews. The ALP candidate Peter Beattie was genuinely entertaining when one of the media children asked about Prime Minister Kevin Rudd’s comment that he ‘has a beer every half hour on the campaign’.

Actually, the question was for the minister:

“As health minister do you think it’s appropriate to be drinking beer every half hour?”

The minister smiled: “I’m sure he was joking.”

The candidate interjected: “Unless it was Fourex, then that’d be okay.”

He was off-message and it was funny. So was the fact he failed to defer to the health minister on a question of federal significance, forgetting for a moment he was no longer Queensland Premier, remembering just in time to zip the watermelon smile and hand the stage to the health minister.

Who said ‘you go’ and he said ‘no you go’ and she said ‘you’ and he did. Because if anyone can be trusted with ensuring the ALP’s rehearsed lines sound not so rehearsed it is the ALP candidate for Forde. 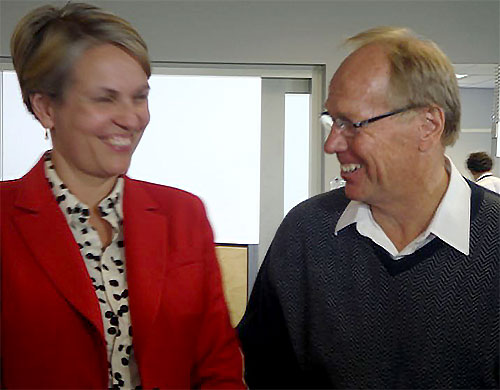