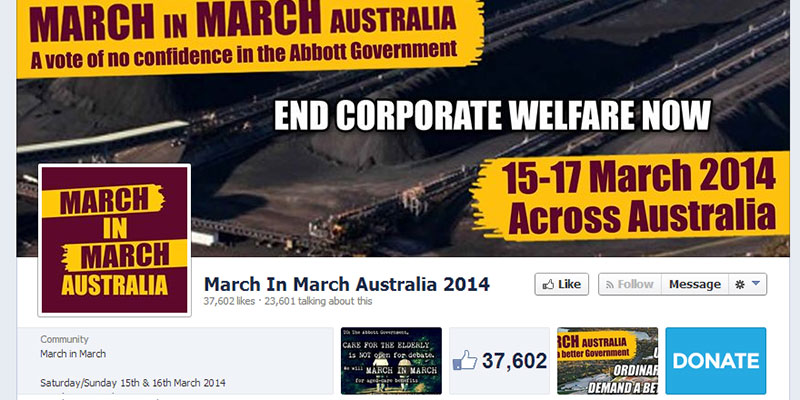 One month into the Abbott Government, a user on Twitter floated the idea of banding together to voice concern about the direction the new Prime Minister was taking Australia. From this seed a movement was formed – MarchInMarch.

Fast forward to early March, 2014, and it’s grown into a truly national grassroots movement that will be taking to the streets between March 15 and 17 in around 30 locations across Australia.

I covered the seat of Indi for @NoFibs and have been tracking MarchInMarch’s growth. It seems to have a similar momentum to Cathy McGowan’s campaign, drawing people from all walks of life and political allegiances.

Without a focus on any single issue, it could be described as a call for decency, transparency and honesty in politics.

In a press release the group said of the Abbott Government: “They were concerned that each policy was being designed to advantage big business and the wealthy, while policies which would assist the poor and the disadvantaged were hastily dismantled.”

The MarchInMarch Facebook page has grown to over 36,350 likes. The Twitter hastag #marchinmarch and comments on their Facebook page gives an insight into just how diverse this group and its supporters are.

NoFibs spoke to Craig Batty (@ResignInShame), one of the national administrators of the MarchInMarch movement. Craig said conservatively the indications are that upwards of 30,000 people will take part in events across the country. He said the underlining theme drawing people in seemed to be in the Abbott Government’s destruction of the ‘fair go’.

People have been raising concerns about the environment: “The Great Barrier Reef, Tarkine and fracking”. One of the hot-button issues is, “human rights and Australia’s treatment of refugees”. Craig said these don’t even scratch the surface, and couldn’t list all the issues people are concerned about, there are just so many.

The organisers are still locking in speakers for each event. Well known technology writer and blogger Kieran Cummings (@sortius) will be addressing the Melbourne event.

Fr Rod Bower said the reason he was attracted to the group was because it was a grassroots movement without any particular agenda. He said he liked the way it evolved from just a couple of people having a thought to a movement that was starting to pick up some of the issues that are close to his heart: “Refugees and some of the more progressive issues such as marriage equity.”

Rod likes the way the movement is putting out ideas for people to think about, especially on the “false equivalence arguments” in the information the Abbott Government provides about certain policies. People have been considering whether these arguments really are equivalent, or if they’re just spin not worthy of our consideration, especially on topics such as Australia’s treatment of refugees and deaths at sea.

It remains to be seen what happens to the movement once the marches are over. Will it evolve beyond three days in March?

One thing is certain, MarchInMarch is capturing imaginations and providing an outlet for people to express their frustration and concern at the direction the Abbott Government is taking Australia.

NoFibs will be covering as many of the events as possible. If you’re interesting in helping cover a MarchInMarch event near you, drop @margokingston1 a tweet.