Review – The Stalking of Julia Gillard 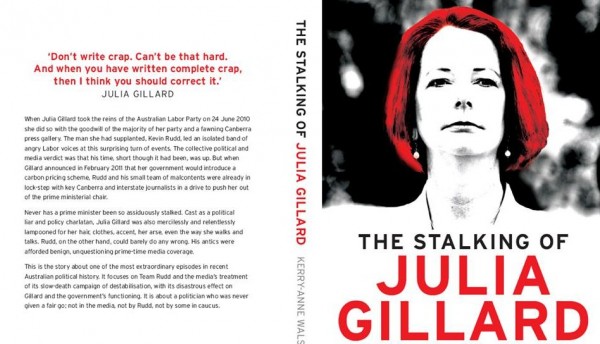 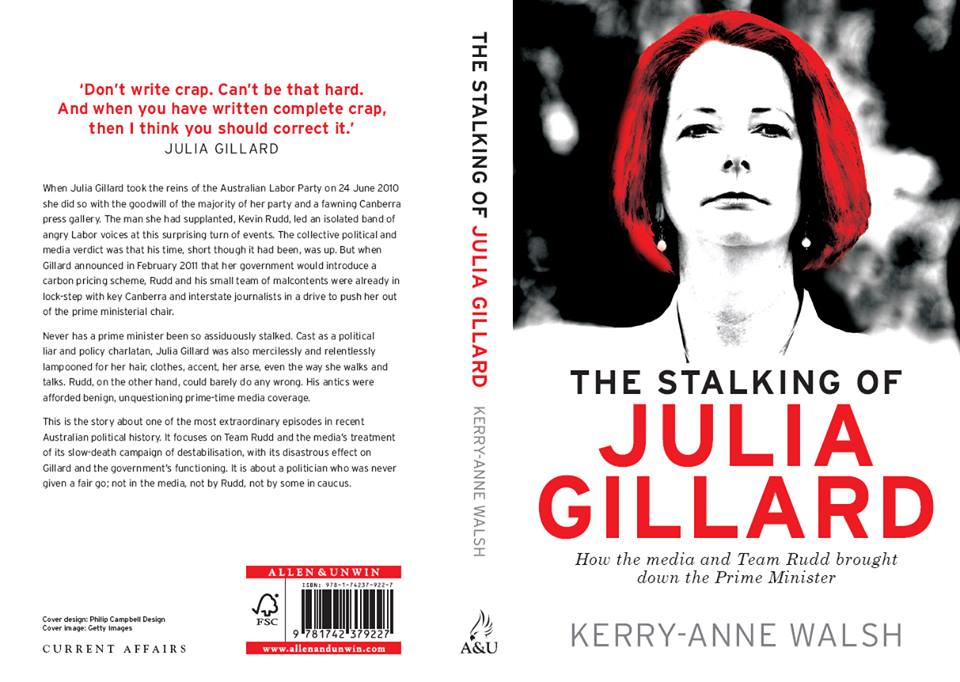 With the blood still fresh on the walls of the caucus room, Kerry-Anne Walsh’s The Stalking of Julia Gillard is a victim of excellent – or poor – timing.

Excellent because the public is looking for an insight into what went wrong with the nation’s first female PM in her disastrous three-year interregnum. Disastrous because the book is just as quickly out of date as soon as it arrives on shelves. Such is the nature of political reportage.

However those looking for a definitive history of the Gillard years will need to wait a bit longer. Walsh’s book is not this.

It’s a cry from the heart of one of the nation’s best Gallery journalists on the state of her industry. And the book suffers because of this.

It’s not a history – it’s a polemic tacked onto a diarized recounting of events. And one where the personality – and yes, the anguish – of the author shows through a bit too much, breaching the fourth wall with acerbic comments.

Walsh provides none of the insight we have come to expect from political reads such as Pamela Williams “the Victory” (which set the standard) and Christine Jackman’s “Inside Kevin 07”. These books were more akin to some of the great American reads such as Game Change, with interviews with main players and allowing the reader to peek behind the veil.

The Stalking of Julia Gllard sadly resembles at times a pastiche of cut-and-paste media stories overlaid with commentary. It lacks the insight. I wanted to read the inside story of the night Gillard knifed Rudd, hear of the frantic corridor conversations as her staff stitched up support while she distracted Rudd in his office. I wanted an insight into Rudd’s psyche as he plotted his return, what went through his mind as his former Ministers bagged him.

There’s none of this sort of in-depth research. It’s not like the main players were too shy to talk about it. Marian Wilkinson showed what could be done with her Four Corners report into the end of the interregnum – somewhat of a rush job retelling, but with some insight nevertheless.

Walsh’s book is instead an investigation of how the media covered the main players. To use an analogy, it’s the sort of history that analyses Herodotus rather than the actual Persian Wars, or a sports book that looks at how the media covered the Ashes, rather than the games themselves. It’s a valid enough field of study, even if the marketing has been a little indistinct on this.

But it’s here that Walsh fails. There’s little insight into how the media thought. There’s a recounting of it, and Walsh’s interpretation of it, but no substantive interviews with the journalists in question. There’s an understandable reluctance to reveal sources, but surely some insight into newsroom decisions would be worthwhile. Equally, Walsh’s analysis of the media is her analysis, rarely backed up by third-party sources. It’s her essay – her crie de coeur – on the ills befalling the Gallery, not an independent and sober analysis of what did and didn’t (or should have) happened.

It’s also an attack on Rudd, who Walsh clearly believes went out to attack Gillard, and that this attack was exacerbated because she was a woman. It’s a thinly veiled accusation made less thin by the word “stalking” in the title. It is uncomfortable because the argument falls flat when you remember that Rudd was the one knifed in the first place. He wasn’t white-anting, as much as retaliating. But there is little scholarship to back up Walsh’s hypothesis (even though it’s not implicitly stated as such). Again, her premise falls down because of a lack of third-party analysis and commentary.

For what it’s worth, I think that Walsh is correct, at least in regard to the Gallery. It is obsessed with personality over policy. Many in the media – especially right wing radio – would never have addressed a man in the same terms. Imagine what Hawke’s response would have been to Alan Jones naming him a liar in the same sneering tone? But it’s ever been thus. Caesar would have never become Imperator had he not white-anted the Senate with his Gallic Commentaries. But The Stalking of Julia Gillard fails to give us any new arguments or analysis of why. Those who believe the Gallery is at fault will nod their heads in collective understanding. But The Stalking of Julia Gillard won’t change the minds of the unconvinced.

Matthew Horan is a former Federal Press Gallery reporter and former Chief of Staff of The Sunday Telegraph. Since leaving journalism he has been awarded a Masters in Ancient History and is currently researching post-graduate studies in the later Roman Empire.