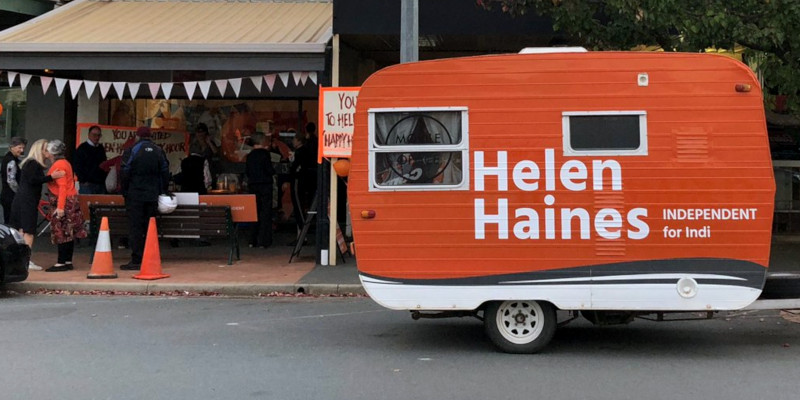 For those who still think our rural community of Indi is asleep on a slow train to a washed-out railway bridge, I suggest that the activity in the streets and halls all over the place should be arresting.

In the main shopping strip of Euroa, on Tuesday evening this week, cattle farmers, woolgrowers, lamb producers, businesspeople, lawyers, librarians, accountants, horsepeople, artists and teachers came together to launch the campaign hub for Helen Haines (@helenhaines1), the Independent candidate seeking to represent the seat of Indi.

#IndiVotes is off and running.

Haines’ agricultural credentials are firm. She has lived, worked and raised a family with her husband Phil, an agricultural scientist, across decades and in pursuit of their mutual interest in regional development in the north east of Victoria.

At Euroa, in the heart of agricultural Victoria, and in a seat reputably welded to the agenda of the conservative parties, Haines was in her element. Even though she is ‘new’ to ‘south’ Indi, fifty locals attended to hear what she had to say and to form a view about what to do in the forthcoming #ClimateElection.

Haines was welcomed to the hub by one senior and seriously embedded rural woman who, taking her mates and some strangers with her, said “Helen is the candidate for me.”

It takes some bottle as a lamb producer to stand in Binney Street and declare for change. That is what occurred.

Helen Haines has declared herself for change. At The Cube in Wodonga on Sunday just gone, at her campaign launch, she committed her campaign to education, health, a sustainable regional economy and the need for climate change policy. She did so again on Wednesday night in Benalla, to a packed hall of about 230 people, fielding questions about education, health, regional development and climate change.

It seems very few people actually think a drought envoy who urges rural people to ‘pray for rain’ is on the country-money.

Haines’ comments resonate down the Hume Highway, out of Dhuduroa Country and into the landfall of the Taungurong. At Euroa, the quiet gathering of concerned voices has been cultivated and galvanised (but not in the manner of the ‘Weatherboard Nine’ (sic)).

Over 2015 and 2016 Euroa produced and hosted an Environment Series, an event the community wants to repeat. The farmers and businesspeople who attended the ten sessions across those two highly-charged years valued the access they gained to scientists, policy people, planners, geographers, local government experts, university student researchers, CEOs and others.

They have stored up the conversations they had at that Environment Series — like a grain harvest — waiting and thinking about balance and opportunities.

The farming and broader regional communities are not foolish. They have been considering the actions they can take in the face of this worsening drought and climate change implications. They have been asking, what is the farming future? What is the potential for bigger or smaller landholdings, for restorative agriculture, or for relocation? They are looking for advocates and representatives to take the message to those who make the laws and deliver on policy.

Farming communities, and the regional economies they sustain and draw upon, are not the least bit interested in political infighting and the blame game which has typified our political discourse over the past decade. We want practical action which is free of personal advancement and ego, and a vision for a farming and regional future which is sustainable.

Praying for rain is not the answer

A politician who tells us to pray for rain when they have a real job to do on climate change is simply contemptuous of the community.

In fact it is more than that, they are scoffing at real pain and a real desire to find solutions to our climate change challenges (if it isn’t already too late for some). Such a comment belies the clear sight of the rural community.

We look out our windows and see change — not ‘natural’ variability.

We hardly need to read the recent IPCC 1.5 degree report to know that insect populations necessary for pollination, food production and soil health, are contracting their range. The report concludes that the range of up to 18 per cent of all insect species is expected to contract by 50pc with a 2C-degree rise future. The anticipated water crisis is already apparent and the ‘Vertessy report‘ on the recent massive fish deaths in the Murray-Darling Basin concludes that climate change has its fingerprints all over that environmental disaster.

This is why rural people are attending campaign launches for candidates like Helen Haines. We are saying to those who reduce our concerns to ‘smart alec’ tripe — they have lost our confidence. Some would argue that they lost our respect a long time ago.

This #ClimateElection is our election to seize.