Seeking a Fair Go in a ‘World of Pain’ by @sarah_capper 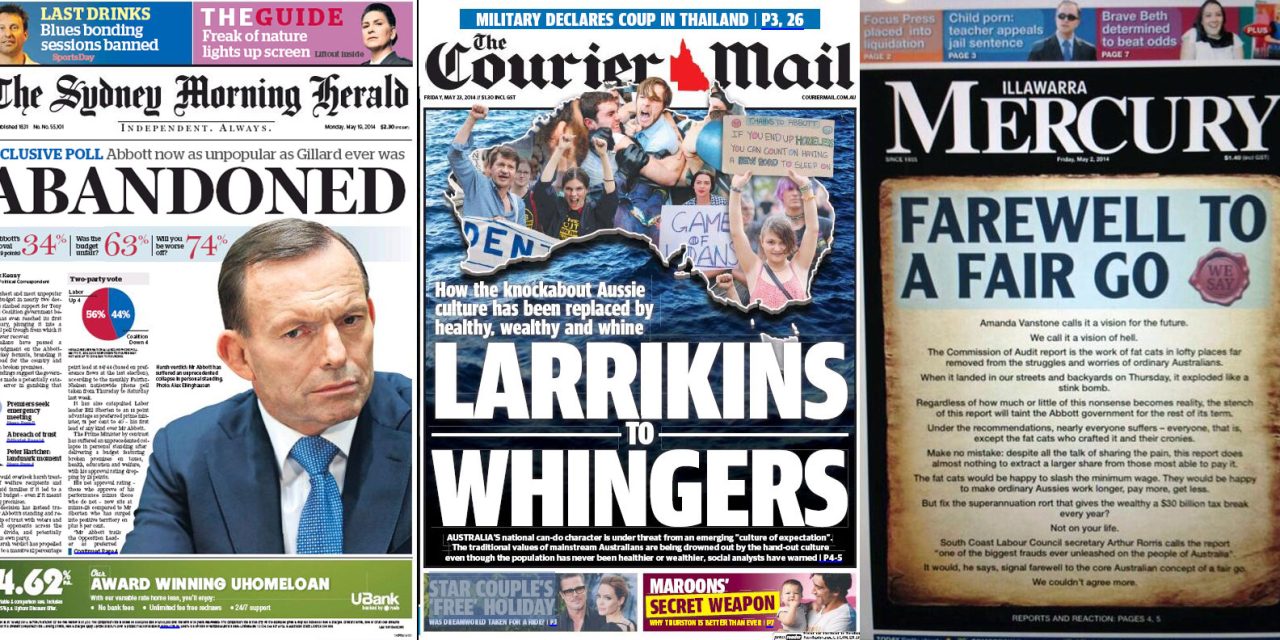 It’s hard to fully comprehend, but just eight months after being elected, the Coalition-friendly News Limited broadsheet ‘The Australian’ ran with the headline, ‘Coalition in World of Pain’ emblazoned across its front page early this week.

Sure, it was selectively quoting Prime Minister Tony Abbott, who had used the expression in justifying why the Government needed to make “tough” decisions in handing down its first budget, but nonetheless the Oz chose the headline to correspond with a story reporting the dismal Newspoll results in which voters declared it to be the worst budget in 20 years, and which gave Labor a 10 point two-party preferred lead over the Government.

“Abbott’s [approval] rating is in the territory of Gillard’s in her dark days.”

The Nielsen polling revealed that two thirds of respondents deemed the budget “not fair”. The significance of this, as Grattan wrote, was that “a question on fairness was asked after some eight of 19 budgets since 1996”, and “this was the first time a majority said the budget wasn’t fair.”

Fairness is key to the unprecedented negative response to this budget the Government is now receiving.

I give Joe Hockey’s first budgetary exam a distinction on management of the macro economy, a credit on micro-economic reform and a fail on fairness.

Although Hockey has laboured hard to ensure few sections of the community escape unscathed, the truth is most of us have been let off lightly.

Only those people right at the bottom of the ladder have been hit hard – unemployed young people, the sick poor and, eventually, aged and disabled pensioners – but who cares about them? We’ve been trained to worry only about ourselves, and to shout and scream over the slightest scratch.

The Saturday Paper’s editorial also touched on the issue of fairness:

“But what is most striking is that this is a budget that offers a brief discomfort for the very rich, and sustained punishment for the not rich at all. It is the young who will suffer and the elderly poor.”

“Hockey created a budget emergency and deficit fetish into which he launched this budget. In the chaos of emergency, and with a tabloid press telling the very people worst affected by this budget that they had been saved, much has been forgotten. Fairness, among other things.”

So how fair is the budget for women? Don’t expect the Abbott Government (and Minister for Women) to apply a gender lens to these new initiatives. Fortunately, we have other organisations, commentators, and political parties who are providing some analysis.

According to feminist Anne Summers, “get thee to a workplace” was “essentially the message to women from Treasurer Joe Hockey in the budget.”

Summers said she was “surprised” at some of the measures announced last Tuesday, in relation to the impact on women and workforce participation and changes to family tax benefits:

“This is the side of politics that had made the stay-at-home mother an ideological cornerstone, that introduced the dependent spouse rebate and the baby bonus [under the Howard Government]. “Now they are the ones who are abolishing these inducements to be a stay-at-home mum,”

she wrote, at the same time questioning how some of Hockey’s announcements last Tuesday will actually encourage women back into the workforce:

“If you wanted women back at work, you would not be cutting $230 million from childcare subsidies as Mr Hockey did on Tuesday.”

“If you want to encourage women into the economy, it would make sense to acknowledge and address the pay gap as well as some of these less tangible obstacles to women being able to enjoy employment parity with men.”

The gender pay gap was also on the mind of YWCA Executive OfficerCaroline Lambert, who with a team of Y colleagues joined the budget lock-up in Canberra last week to analyse the impacts on women.

Reporting on the experience for website Mamamia, Lambert explained that the group approached the task with the question,

On the whole, Lambert labelled the budget a “mixed bag” for women. She listed the encouraging signs as:

Lambert also noted the policies to address violence against women were also “mixed”. Fifty million dollars will be redirected into infrastructure, including the introduction of more CCTV cameras and street lighting.  As Lambert wrote, “there were no announcements of funding for primary prevention”. (And lighting and CCTV cameras don’t count – as US violence prevention expert Jackson Katz has explained time and time again, such measures are really about addressing risk reduction, than actually being about primary prevention).

Writing for Fairfax, Marie Coleman echoed many of the concerns Lambert raised. She also noted:

“Women concerned about the well-being of women in developing nations may be distressed by the savings of $7.6 billion over five years from development assistance, and reversing decisions to join the African Development Bank and the International Fund for Agricultural Development.

“And, finally, the very modest funding for the Office for Women’s Leadership and Development Strategy will have to achieve savings of $1.6 million over four years. The decision on where the cuts will fall is left to the Minister for Women (who fortuitously has declared himself to be a feminist).”

Indeed, there was no such critique or refection from the Government’s ‘Minister for Women’ in terms of framing the policy announcements in terms of their impact on women, but both the Labor Party and the Greens have provided some insight into policy impacts on women.

The Greens looked at the impact on changes to HECS:

The Greens have released fresh modelling of the impact of the student loan scheme changes, focusing on how the interest amendments could affect women who take a year out of the workforce, and then spend two years working part-time, to have a baby.

And Labor released a paper looking at various policy announcements and their impact on women. Overall, the paper notes:

“This budget of broken promises makes savage cuts to pensions, hospitals, family payments, superannuation, education and services and more taxes will impact on all Australians, but will have a deep impact on women who have lower economic security.”

The PDF document can be downloaded here.

What’s driving all this? The Government’s motivation to slug low income earners, including pensioners, students, and indeed women?

Writing in the Saturday Paper, former Treasurer Wayne Swan weighed in with an opinion piece, arguing the budget is about

“raw ideology – a desire to shrink the size of government is the real driver of the Abbott government’s first budget. It splinters the key planks of our social contract, which makes Australia one of the most prosperous and socially mobile developed economies in the Western world.”

And, “So we’ve had a lot of sound and fury about deficit and debt and neither has gone down substantially [with forward estimates attached to this budget]. Why? They’re starving the beast: a strategy imported from the United States. Reagan, then Bush and now the Tea Party have all employed this strategy which sets about shrinking the size of the government by, first of all, driving the budget into deficit, then concentrating all political firepower on the need to cut expenditure to fix the deficit.”

If this sounds extreme, perhaps just cast your eye back to Joe Hockey’s original ‘End of the Age of Entitlement’ address to the Institute of Economic Affairs in London in April 2012.

In this speech, Hockey lays out his vision, the beginnings of which can be seen in budget 2014.

He declares entitlement “a concept that corrodes the very heart of the process of free enterprise that drives our economies”.

He provides the example of Hong Kong, as a system to emulate:

“The system there is that you work hard, your parents look after the kids, you look after your grandkids and you save as you work for 40 years to fund your retirement.

The society is focused on making sure people can look after themselves well into old age.

“The concept of filial piety, from the Confucian classic Xiao Jing, is thriving today right across Asia. It is also the very best and most enduring guide for community and social infrastructure.”

This very same  paper delivered by the then Shadow Treasurer back in 2012 delivers some important lines that underscore what is now being played out across the nation:

“The road back to fiscal sustainability will not be easy.

It will involve reducing the provision of so called “free” government services to those who feel they are entitled to receive them.

It will involve reducing government spending to be lower than government revenue for a long time.

It is likely to result in a lowering of the standard of living for whole societies as they learn to live within their means.

The political challenge will be to convince the electorate of the need for fiscal pain and to ensure that the burden is equally shared.”

And here lies the rub with the current budget. Mr Hockey is trying to convince Australians that his first budget is simply a case of necessary fiscal rectitude and making sure that we all play our part in “sharing” the “fiscal pain.” But at its heart are a set of propositions that are ideological. This is an ideology that sets a premium on small government, limited safety nets, wealth redistribution and free enterprise without ‘over entitlement’. Note also that the concept of filial piety he seems so attracted to, is also code for maintaining traditional gender roles around primary care, family functioning and the delivery of welfare across a society.

While much of the media covered Hockey’s 2012 speech, reporting it as having happened, analysis of this ideological vision for Australia has been thin on the ground. And while he now casually declares the ‘age of entitlement’ as being over, the lack of any substantial media analysis over the past two years means that we have been, until now, denied the chance to debate these ideological propositions and whether they are our best chance in dealing with the structural reform that we face over the next decade.

The debate is finally catching up with Hockey.  People are questioning the issue of fairness with the release of the federal budget, and the seemingly punitive and ham-fisted approach that has been taken and thrust on some of the country’s most disadvantaged. It is heartening that even without Hockey’s 2012 ‘backgrounder’, enough Australians have a good nose for, and can recognize, something greatly amiss in Hockey’s approach to structural reform.

Australians by and large have an intuitive sense of the importance of the societal safety nets we have in place that many other countries can only dream of emulating – universal health care, mandatory superannuation savings, access to education, a minimum wage, an industrial relations system that protects basic workers’ rights, and indeed a welfare system for the disadvantaged – to name more than a few. They also have a good nose for the fact that Mr Hockey’s first budget is taking aim at eroding these cornerstones and redistributing wealth, all in the name of a ‘Thatcherite’ ideological agenda.

The national conversation has to be about working within these hugely important parameters –  protecting what we know works for the common good at the same time as ensuring acceptable reforms to our tax bases, revenue streams and outlays at both federal and state levels. Fairness is the key and Australians seem to be onto it.