Selling the Budget, @YaThinkN is here to help #Auspol 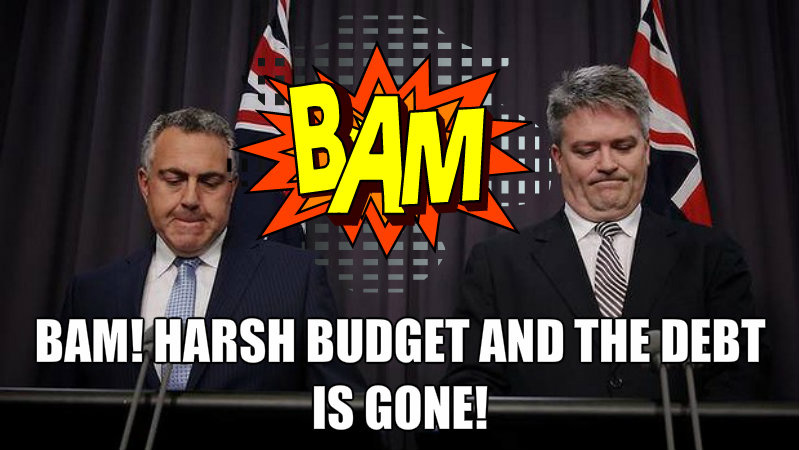 Normally when the Federal Budget comes out we punters get rather amused at the excitement we see in the media. We giggle at seeing Kochie from Sunrise get his jollies about being in lock up, but unless there is some blatantly nasty stuff in the budget that will hit our hip pockets, we really don’t care too much. In fact, by the time the political talking heads have started discussing it, our eyes have already glazed over and we have moved on to more important things, like who are the front runners in The Voice or has Matt Preston’s cravats got louder?

This budget is a different animal after a month we are still whinging about it. Talking with the girls on the deck, consensus was the budget sucks, and we didn’t even need to quaff too much Cardonnay to come to that stunning conclusion.

Since then though, I have been informed that we are way off base. It would appear that the Coalition has had problems ‘Selling the Budget’ and if we punters understood it better, all would be good. This got me thinking, maybe our esteemed leader PM Abbott and his highly qualified Treasurer Mr Joe Hockey need a little bit of the common touch to help them communicate their brave budget decisions to the vast unwashed in the nation?

My name is Noely, I’m from Queensland and I’m here to help sell the budget ;-)

After watching the news, obviously the most important thing in the budget is that we all have to do the heavy lifting to save us from Labour’s Debt & Deficit Disaster. A few pesky numbers blokes keep whispering that we aren’t really in a bad way, compared to the rest of the world blah blah, so how do you drown out inconvenient facts?  You yell!  Easy off Bam has the answer.

BAM! Harsh Budget and the DEBT is gone!

Ok, maybe that slogan has more than three words, so might be difficult for the Government to pull off, but I am sure if they yelled it loud enough, saturated the advertising in all the really popular TV shows, we would get the hint after a while and stop all this whinging about unfairness rubbish that seems to be coming from the ungrateful unemployed, selfish pensioners and rabble rousing Uni Students, of course ignoring those pesky economic experts that aren’t employed by the Government?  Easy and cheap!

Let’s follow that up with the old switcheroo? You know, turning a negative into a positive? I mean, what is really wrong with a few broken promises between friends when those back flips will actually help us? I can see a few big whinging points that could be turned to positives and all the whinging punters would be swayed…

Health
Ok, you got a few problems here boys, bit confusing with this ‘Medicare is unsustainable’ business yet telling us we are contributing to a super dooper Medical Research fund, not actually Medicare? Even the most moronic among us can see that doesn’t add up, so flick mentioning the Medical Research brain fart, we have been groomed for a number of years now to not give a rats about anyone except ourselves and you probably won’t cure cancer in time to help us, so we don’t care.

Stay on message, turn the 7 buck GP payment into a bonus, and Joe, just a note, some states don’t even have ‘middies’? Coke and Tim Tams, that is where you go mate. Everyone has Coke and Tim Tams and as we are being told, we are a nation of obese adults and kiddies, so that is a big win for Medicare, if we have to forgo those goodies to go to the doctor, well, helps the obesity issue which costs Medicare a fortune too?

Now some of these flabby buggers won’t give up on the Coke or Tim Tams so they just won’t go to the doctor, bigger WIN! Will probably die from preventable disease, but hey, that is outweighed by the cost we have saved in the health budget from them constantly seeing the doctor or going to the Hospital for treatment?

Education
We are aspirational, Mr John Howard told me, so who cares if you can’t afford a private school that the Government is still funding? I mean, don’t you care about your child’s future, if you did, you would work a second job and send them to a private school? Another win win, more productivity and less need for those scrounging bloody State Schools?

If you have to be low class and send your kid to a poorly funded State School well, there will be a friendly chaplain there to listen to your woes. Bonus of the chaplains is that will shut up all those lefty gay and women’s right people into the future too? I give it a decade, no abortions (cheaper on Health too, bonus!) and no gays, will have been indoctrinated out of our lives? No gays will save us a fortune, can flick a heap of bullying programs, community organisations, and pretty much just live simpler lives where we all aspire to be white heterosexual men with a good private school education and of course women of calibre to support those men ;-)

Ok, Uni students incurring massive life-long debts is a bit harder to make positive. BUT never fear, I have it!  At the moment, a heap of Uni students still live at home while they are at Uni, you know, study, little hours available for casual work to subsidize and anyhow, no penalty rates soon, so definitely will be living at home. Parents hate this, so, if you up the fees massively and kids think they will have an albatross around their necks for decades, they won’t go to Uni. If they don’t go to Uni, they move out of home?  See, this is a real winner, will save on subsidizing Uni’s, will save parents having to support Uni kids and will mean more kids in the workforce, productivity! Triple bonus there mate.

Welfare
I will leave you with the hardest one, even Hugh Jackman couldn’t sell this one successfully. The most hardcore punters can’t quite work out how someone is supposed to survive for 6 months or more on nothing? So you are going to have to pull out the big guns on this one and the only downside is that will inconvenience a few regular Bali holiday makers. You don’t need to reinvent the wheel, the PM has already done some hard yards pissing off Indonesia, so go that one step further, WAR!

Yep, I am sure with Ms Bishops help you can totally push Indo to the edge, it would not take a hell of a lot more work on Tony & Julies behalf, particularly when the affable SBY is being put out to pasture soon. Toss in a few more bugs, particularly targeting the new RI candidates families, brag about it, diss the new President in his first week of office and Indonesia will go ballistic. Everyone in Australia will be so bloody scared thinking Marsden’s “Tomorrow, When the War Began” is actually a survival manual and the budget will be but a passing memory. AND at the same time you can draft all the bludgers on welfare? Ultimate WIN WIN!

Actually guys, now that I think about it…  Bugger it!  Don’t even stuff around with the media massaging to sell your budget, just piss off Indonesia now, that will shut us all up and no-one will even remember the lemon you tried to sell us?  Problem solved!

Then again, what the hell do I know, I am just a punter, but word of warning, better make sure you can fast-track those shiny new Joint Strike Fighters, we um might need them? As a bonus though, we will stop squealing about the 24 billion spent on them ;-)