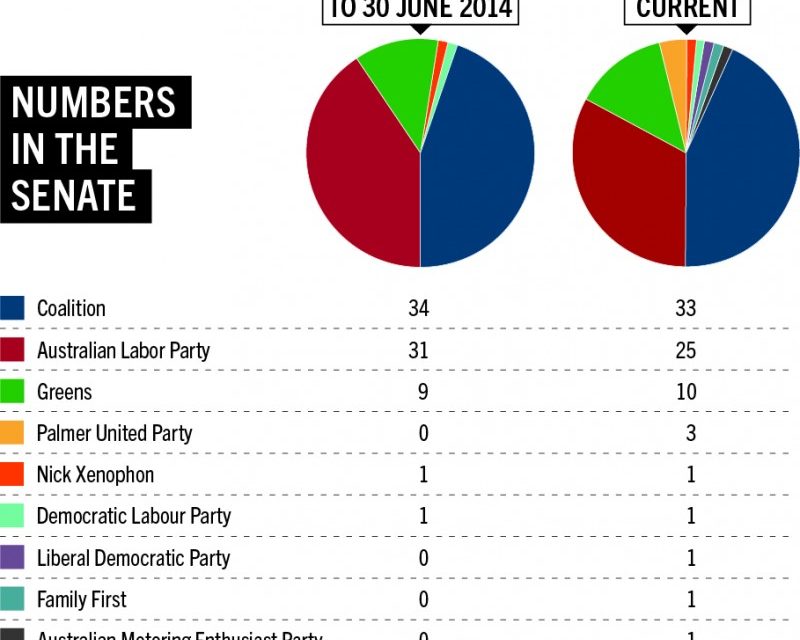 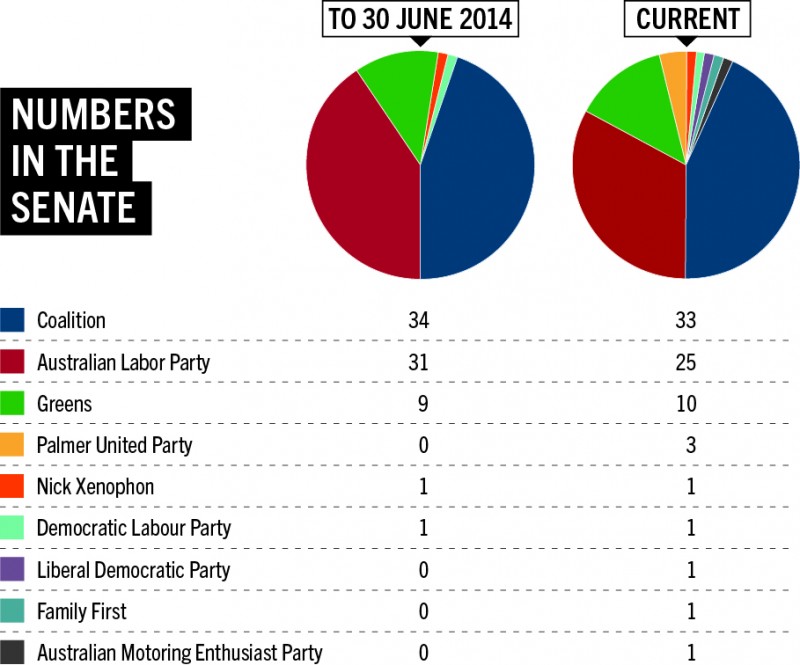 A whole new class of players joined the Upper House this month, and with a record number of cross-benchers – 18, including the Greens – there will be deals-a-plenty and the “spin cycle” on overdrive. Cards will be kept close to chests; cards will be put out on the table; and, as the last week has shown, cards will just as quickly be taken away.

While PUP leader Clive Palmer appeals to pensioners by saying he will block the Government’s $7 GP co-payment, so that “those ladies” can “have their chocolate and go to the cinema”, let’s crunch the critical numbers with a round of ‘Senate Bingo’.

1.  For July 1, when the new federal Senate became effective. In this first week of the month, the new senators taking up their seats for the first time attended a pre-Senate school of sorts, being versed in procedures of the Upper House. New Nationals Senator Matthew Canavan compared it to the first day of school, clarifying that “It’s a bit better here because I get along much better with these teachers than I did with my actual teachers,” he said, as reported by Fairfax. Straight to the top of the class.

The first week was also when Opposition leader Bill Shorten observed that Liberal Senators George Brandis (from Queensland) and Tasmania’s Eric Abetz would be supposedly leading a “charm offensive” in wooing the new cross-bench Senators. Being “charmed” by Brandis and Abetz calls for a slight stretch of the imagination, or as Shorten argued, “With those two characters, it is all offensive and no charm.”

2. For the two cross-bench Senators who will continue on from the old Senate make-up to the new – Nick Xenophon from South Australia, and the Democratic Labour Party’s John Madigan [DLP, shiverrrr]. This week, both slammed Clive Palmer, the head of the Palmer United Party, for verbally abusing Senate staff this week, namely Senate Clerk Rosemary Laing. Madigan said Palmer’s actions “set a bad precedent” while Xenophon labelled him a bully.

Don’t expect these two to agree on much (with Madigan from the more conservative side of politics), but in terms of the cross-benchers, they are two of the more experienced members of parliament.

3. Three is for the Palmer United Party, and the number of senators this new party recorded following last year’s election – including Queensland’s Glenn Lazarus, who as a former rugby league legend, was fondly known as the ‘brick with eyes‘, WA’s Dio Wang (with at least one unfortunate commercial television news program recently including subtitles with Wang’s comments), and Tasmania’s Jacqui Lambie, who last week met with Prime Minister Tony Abbott just days after labelling him a “political psychopath”.

Lambie, with a former military background, doesn’t seem afraid of anything, and is already providing ‘sound-clips of gold’ every time she opens her mouth. After naming Labor Senator Penny Wong as one of her political heroes, Wong said, “It’s very kind of her … it’s not often I’m on the same list as Margaret Thatcher,” bless, with Wong adding, “Women in politics, as we know, have to hold their own and I think Jacqui demonstrates her capacity to do that and good on her.”

Stream parliament live and order in the popcorn. Can’t wait for Senate Estimates if Lambie has anything to do with it!

4. Four is Palmer’s security blanket – new Motoring Enthusiast Party Senator from Victoria, Ricky Muir, with whom Palmer did a deal in between the WA Senate rerun election to shore up his PUP numbers. But don’t expect Ricky ‘Balance of Power’ Muir’s vote to be a given. In his first official week of the Senate meeting, Muirbroke away from his PUP colleagues to vote with Labor and the Greens against the Government’s attempt to gag debate on the Carbon Tax repeal (something Senator Penny Wong brilliantly articulated – clip here).

Muir is also not going to be boxed in terms of predictability – last week the Motoring Enthusiast also revealed himself to be what Guardian journalist Lenore Taylor called the “surprise would-be saviour” of the Australian Renewable Energy Agency (ARENA).

5. Represents the number of single micro-party members and independent Senators – joining Nick Xenophon and John Madigan of the DLP and Muir of the Motoring Enthusiasts Party are David Leyonhjelm of the Liberal Democratic Party (not to be confused with the Liberal Party, as the suggestion goes following the 2013 poll in which NSW voters were said to be confused, thinking they were voting an Abbott party rep and providing a sound argument for non-compulsory voting), and South Australia’s Bob Day from Family First.

The Family First Senator is keen to dispel any myths about the new class of senators in this 44th parliament. On his arrival in Canberra, as Fairfax reported, Day noted that the cross-benchers had been labelled everything from “a mish-mash, flotsam and jetsam, bunch of barnyard (animals), licorice all-sorts, Star Wars aliens,”uh-huh.

As for Leyonhjelm, he’s also putting his cards on the table, earlier this week declaring his support for gay marriage and calling on the major parties to allow a conscience vote, with a nod again to Labor Senator and out-lesbian Penny Wong:

It should be noted that Leyonjhelm’s support for gay marriage would come at a cost, dependent on his support (or removal of that support) of the Government’s Temporary Protection Visa policy [Mental note: next ‘Polly Ticks’ column – Minority Groups’ Wheel of Fortune!].

6.  Six is the magic number of senators the Coalition will need to secure votes in the new Upper House. With the Coalition holding 33 Senate seats out of a possible 76 , it needs six cross-benchers to secure just over half the Senate vote (39). Six is also the number of Seats Labor lost with the July 1 changeover – from 31 Senators to 25.  Six is also the number of senators per state who face election every three years, elected for six years each. Six six six. Yes. Hush now.

7.  Is for July 7, last week when the new Senate took on its physical form with the first sitting day.

8.  Eight (as in the five single members + three PUP Senators) is the number of micro-party and independent Senators the Abbott Government can wrangle negotiations with – assuming the Greens team up with Labor on the bulk of Senate votes.

9.  Represents the previous number of Greens Senators, up until July 1.

11.  Is for the 11 May 2016, the date ABC election guru Antony Green explains is the last day Abbott could gamble a “double dissolution” (the Government can call a ‘double dissolution’ election when a bill twice fails to pass through both Houses. Unlike conventional elections, a double dissolution would dissolve the entire parliament (meaning all Senators would be up for election, not half the senate as they are usually elected for six year terms). As Green wrote on his ABC blog this week:

“The Constitution prevents a double dissolution being called in the last six months of a parliament, which is why 11 May is the cut-off, six months before the three-year anniversary of the current Parliament’s first sitting.

12.  Represents the number of Senators elected per state for six year terms, with six contesting every federal poll at half senate elections (by contrast, there are two senators for each territory, elected on three-year terms (or corresponding with the next federal election cycle).

14. Represents the estimated number of yellow ties PUP Senators Glenn Lazarus and Dio Wang have in their possession – one for each day of the week. Not to be confused with the blue tie brigade.

15. Represents the estimated number of front page stories run by the Australian newspaper on PUP Leader Clive Palmer’s business deals and/or name calling with Queensland Premier Campbell Newman, over any 15 day period between now and the next election.

16. For 2016 and the next federal election. Bring it. By this stage these brand new baby senators should be seasoned players (and will not be contesting their senate seats until 2019), however their performance will surely have an impact on how the country votes in terms of electing the next round of senate cross-benchers.

17. Is for 17 July – for today, the last day the Senate is scheduled to meet during this Winter-sitting.

18. Is for the record number of cross-bench senators ever elected, in this 44th parliament.  As Opposition Leader, Prime Minister Tony Abbott thrived on a diet of cynical opportunism and negativity that undermined community confidence in the previous democratically-formed minority Labor government. Despite the Gillard Government’srecord in terms of passing more legislation than any other previous government (per time frame), Abbott was relentless in labeling the minority government as ‘dysfunctional’ and ‘paralysed’.

Welcome, Prime Minister, to your new political challenge, starting with a short course in how to negotiate in a complex environment, and on complex policy issues.