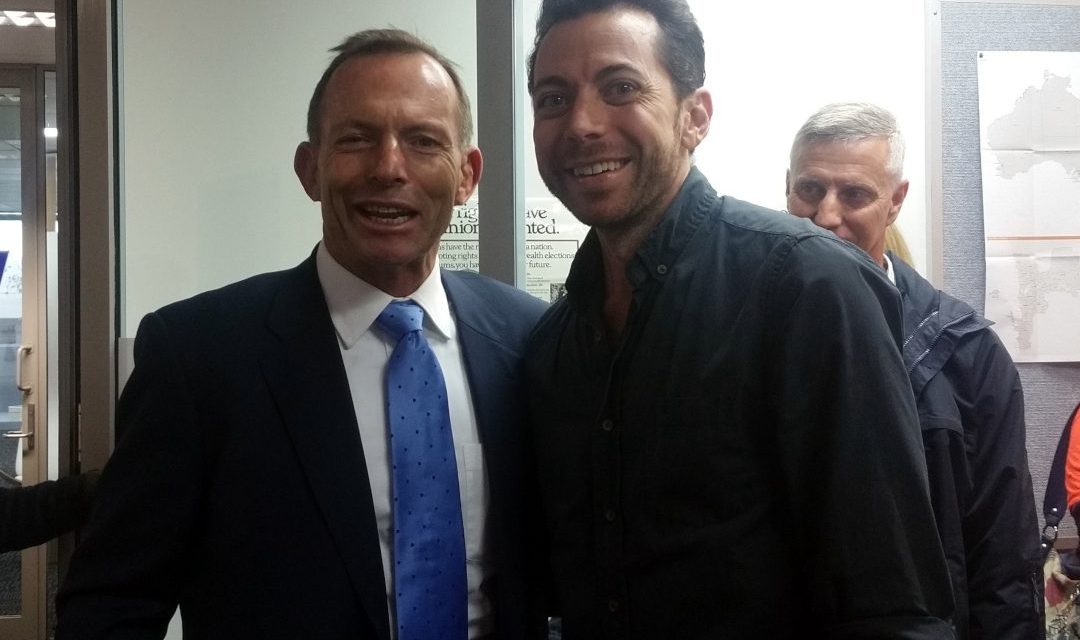 In part 2: Louise faces a series of setbacks – family health issues and Abbott becoming Prime Minister. She joins the new party Australian Progressives and takes on local leadership roles. Disappointed with progress but learning new skills, Louise starts meeting with People of Warringah. Abbott’s 2014 budget from hell politicises the electorate, but local ambition for change wanes – people assume Abbott will retire after losing the Prime Ministership. The search for a candidate that represents the community continues. When the 2016 election is called James Mathison steps up and meets Louise in a Queenscliff park.

NEITHER JAMES MATHISON or I have been involved in an election campaign. I offer time, an engaged group of people in the community, and a room in my house in North Curl Curl as campaign headquarters. He’s a political junkie like me and a celebrity. He lines up a YouTube video with MTV and a front-page story in The Daily Telegraph. We make a website and get photos done. I learn that as an independent he needs to be endorsed by one hundred Warringah voters. We call friends, door knock, catch ferries. Kirk Pengilly from INXS comes up to us in the street in Freshwater and wishes James luck. Tony Windsor offers any help we need.

The page one story in the Tele and the MTV video go off! The video gets over 700,000 views! The media are desperate for some excitement in a very dull campaign.

Next, James is on Nova, The Project, ABC Radio and Sky News for an interview with Andrew Bolt! MTV and 7.30 are following him around. Junkee and The Daily Mail write regular stories. We are reaching the people who don’t follow politics.  Our social media campaign goes gangbusters.

There are candidate panels to speak at (Tony doesn’t turn up – he’s in other electorates lending support to other conservatives).

My nephew Sean takes photos for the website. My sister Kathie and daughter Madeline join the campaign while my husband runs our family business on his own. I’ve never worked so hard in my life, or been so pumped. Madeline and Steve take over the running of the household. They and my sister Kathie are my rocks.

We call in favours from friends for graphic design, T-shirts and posters. My friend Vik makes a giant, laminated poster of a map of Warringah. We stick it on the wall. My friend Alicia has a baby and wants something to work on while she’s at home – she takes charge of the admin and the ever-growing list of volunteers. Many people in my email/Facebook list sign up. All that ‘doing’ is turning into ‘something’! I now have the technical and social media skills, the leadership skills and the confidence to do what I need to do.

James and I hit it off like soul siblings. Decisions are easy, little discussion required – we don’t have time. There’s a lot of swearing, a lot of exasperation, but what I enjoy most is the laughter. I have never needed so little sleep. I’m getting three or four hours and wake up totally refreshed ready to go again. This is a new me!

The day comes when the Australian Electoral Commission (AEC) determines the order of candidates on the ballot. Candidates and campaign leaders crowd into a tiny room for the draw. Andrew Woodward, ALP, gets first spot. He’s constantly criticised James on social media as a “Liberal stooge”. The ALP had never tried to win Warringah, but it seemed the traditional political players didn’t like being challenged. Tony and James shake hands. Tony sees me and I’m not sure if he remembers me.

It’s ‘preferences time’ and candidates sit in cafés vying for them. We don’t have time, I can’t see the point of it for us and I make a unilateral decision. “You know what? This is politics. We’re not interested in this. James will be preferencing according to his values and whatever you decide to do is up to you. Come on James, let’s get back, we’ve got a lot to do.”

The next day, we are informed that Clara Williams Roldan, The Greens’ candidate, has decided to preference James ahead of Labor. Not ‘doing politics’ paid off for once.

An email arrives from a man purporting to be from the Liberal Party, suggesting internal polling is showing it is possible that James could win on preferences. (After the election, a Phil Coorey story in The Australian Financial Review confirms this: Tony Abbott condemns poll leak but concedes he was in trouble).

For the first time since former Manly mayor and independent state MP Dr Peter MacDonald hotly contested the seat of Warringah in 2001, Warringah is suddenly in the throes of expensive and serious electioneering from the Libs. Billboards on motorbikes, robocalls from the PM and the Premier, Mike Baird (both of whom carefully don’t mention Abbott’s name as clearly, their polling shows he is a liability). We have $15,000 for our campaign, enough for T-shirts, flyers, signs and how-to-votes cards, but no robocalls

On election eve Turnbull texts the whole electorate: “A vote for your local Liberal = Stable govt & a Plan for jobs. An Ind/Green/ALP vote means chaos. Together, let’s see it through. Malcolm Turnbull.”

In the very early hours of election morning, James and my husband are on the streets putting up posters, while I get to ‘sleep in’ until about 6am.

If you’d told me when our family was glued to the telly in 2003, watching James Mathison and Andrew G (Osher Gunsberg) on the steps of the Opera House, announcing Guy Sebastian winner of the first Australian Idol contest, that 13 years later I’d be driving Osher around on election day as he campaigned for his mate James, who was contesting the seat of a former PM, and that I’d be managing that campaign, I’d have eaten an onion.

But there I am, Osher in my seven-seater, chatting about life, the universe and everything as we go from school to school. There is one crazy moment when James arrives at North Curl Curl primary school, and Tony Abbott arrives too. Osher, James and Tony. What a combo!

We had turned the dial. We had spent five weeks and about $15k and despite an expensive campaign from the Libs we’d sowed the seeds of change. I was exhausted but ecstatic.

These days, I allow myself a wry smile over how well that text from Turnbull stood the test of time. He pulled out all stops to save Tony, including robocalls warning of a hung parliament if Abbott lost Warringah. A hung parliament with James on the crossbench may have been a very different story for him, and Australia.

Turnbull’s intervention made the difference. Some people who seemed ready for change just went back into their boxes and voted the way they always have.

But that wasn’t the end of the Warringah story.