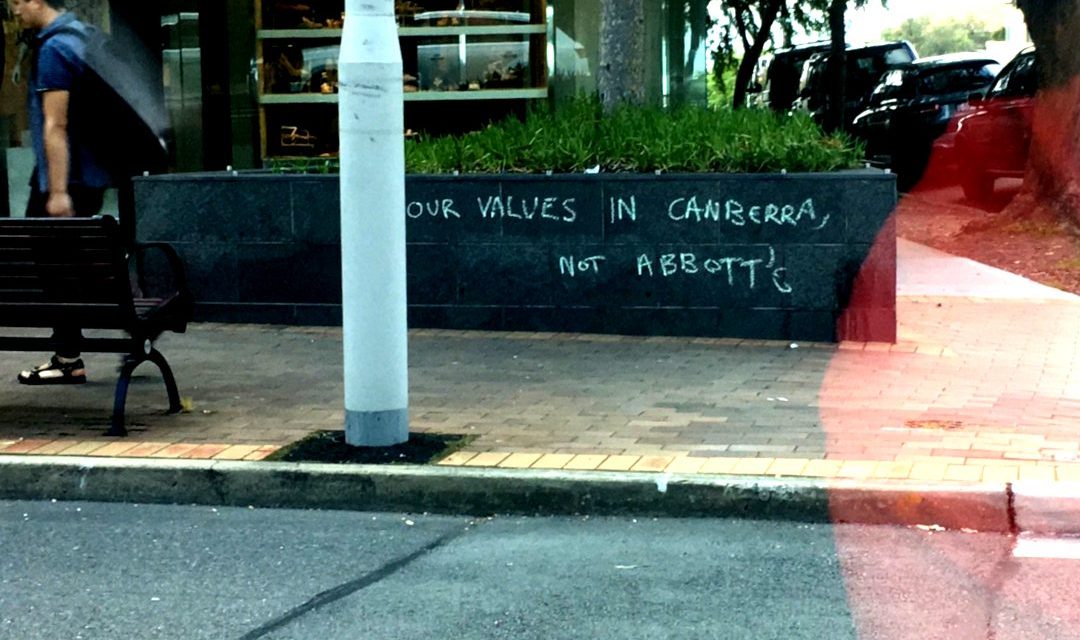 In part 3: Media coverage of James Mathison’s 2016 candidacy and Osher Gunsberg’s endorsement results in the campaign to unseat Abbott reaching a mass audience. After enlisting family and friends and turning her house into campaign headquarters, Louise is rightly pleased about their efforts – the people of Warringah became a political force.

The gathering of the tribes #WinningOfWarringah part 5

SERIES: The wave of our lives #WinningOfWarringah part 7

PREMIER MIKE BAIRD, our state member, retires from politics in January 2017, resulting in an April by-election. Kathryn Ridge, a local lawyer runs as an independent and asks me to help. I’ve never heard of her but when we meet in her campaign office I notice people who I knew had campaigned for Dr Peter Macdonald in 2001 are part of her team, so I am in. Kathy gains 21.8 per cent of the vote and the Liberal, James Griffin, suffers a 24.2pc primary swing but wins the seat.

Kathy is interested in the Kitchen Table Conversation model of the successful campaign for Indi by Cathy McGowan in 2013. During the campaign, she’d invited Denis Ginnivan and Phil Haines from Voices for Indi to speak about local democracy. I’d always taken a keen interest in their work and have already conducted a kitchen table conversation with my Warringah Australian Progressives hub. I love the way Indi consulted with the community and managed to install an independent MP who promised to represent the community on the issues that mattered to them.

Kathy, her young campaigner Meg and I know that negativity won’t work because it engages the people who are already engaged and don’t like the status quo. To engage the people who are quite happy to vote the way they always have, we need to offer something constructive. We need to listen.

In March 2018, Kathy, Meg and I invite 20 people to my place to see if we can create Voices of Warringah (VOW). I’m up the night before listening to music, singing away and cooking nibbles to enjoy, feeling optimistic. We get a decent turnout of 15 people. I am quite deflated as people leave, as it seems many cannot see past a top-down approach, where a candidate is chosen and then a traditional campaign is run to support them, hoping the community will jump on board.

Kathy, Meg and I are convinced this top-down approach won’t work, and a candidate must rise from the community in order to be successful. There must be a campaign for community engagement before we can campaign for a candidate.

We decide to persist.

Kathy is a lawyer with two kids. She often works in remote areas. Meg is really busy finishing her uni degree. They both do as much as they can, but again, time is the biggest thing I have going for me. The family and business is once again thrown into chaos while I throw myself into Voices of Warringah.

Here I go again, calling in favours for websites and graphic design. I’m dragging my daughter’s friends out to pose for photos while drafting the words for the website and madly trying to get the organisation formalised with a committee, a bank account and email and social media accounts, all while having regular meetings with the committee in order to keep them informed. My trusty sister Kathie volunteers to be on the committee with me.

Many of my main crew are no longer available. James Mathison has moved to the Eastern suburbs. Alicia has moved to Queensland. Vik travels overseas for work for months at a time and my sister is busy looking after our Mum who has recently had a fall. Meg tells me she’s going to the US to study. I’m deflated.

Abbott, for the first time that I am aware of, decides to hold a series of town hall mettings around the electorate. You have to register to attend.

I sign up and encourage everyone I know in my local area to attend. However, only my trusty friend Vik and my husband Steve attend with me on a cold July evening.

No reason to hide

Much to my surprise, the first person to ask a question is my husband. I nearly fall off my chair! He has to say his name and suburb before he speaks, and as soon as Steve says the name “Hislop,” Abbott recognises me.

I read my question:

“Hi Tony, I’d like to ask a cheeky but pertinent question. It’s one that cuts straight to the heart of our democracy.

Considering independent polls have shown that the people of Warringah overwhelmingly support investment in renewable energy, a moratorium on new coal  mines, same-sex marriage and the Australian population as a whole is 80 per cent in favour of our publicly-funded broadcaster, the ABC (long pause)… and then considering that you have spent a fair amount of time speaking around the world and the nation at climate-change-denying, pro-coal, anti-same sex marriage and anti-ABC foundations such as the IPA, the Margaret Thatcher Foundation, the Alliance Defending Freedom and even last night at the so-called Australian Environment Foundation… would you agree it is fair to say that your taxpayer-funded public life is more about promoting the interests of extreme, conservative, special interest groups and less about promoting the views of the small ‘l’ liberals of Warringah you are supposed to represent?

A huge groan erupts from the mainly older male audience.

Abbott cuts it off. “Well, I always say, if you don’t agree with me, don’t vote for me! That’s how democracy works!” he says.

“In fact I believe you were involved in a campaign against me at the last election.”

Right, I think, as my stomach does somersaults, Tony does know who I am. There is no reason to hide now.

By acknowledging me he has empowered me.

I say firmly to myself: Okay, Tony, you’re on. Not only will I not vote for you, I will ensure anyone else who does not agree with your radically conservative views and actions will not vote for you either!

That buzzing in my bonnet is now a hive of activity. Thoughts are whirling around my head.

I hear on the grapevine that local GetUp! people are having a meeting. I go along to see if any of them are interested in Voices of Warringah. While working on Dutton’s electorate, they have been told by GetUp! that it was not worth putting resources into Warringah as it’s too safe a seat! I leave them to it.

I am despondent. If some of the most politically engaged people in Warringah don’t think it’s worthwhile, what the hell am I doing? A month before we are due to launch Voices of Warringah, I text James Mathison

“I feel so alone, anxious, unsupported, out of my depth, abandoned and overwhelmed.”

When I see my friends I see a glint of sympathy in their eyes, and I can guess what they’re thinking: Good old Louise, she never gives up, does she? We will never get better representation, but she never stops trying. Good on her though. I’m nearly ready to throw in the towel. I feel stupid.

Then, I’m sitting at my desk in early September, working on an email. My phone rings. It’s a random number. I usually don’t answer those calls. Something makes me do it this time.

“Hello, this is Julie Giannesini, is that Louise Hislop?”

That moment changed everything. Julie, a former Liberal Party member, hooks me up with a small group in Mosman concerned about the lack of leadership on climate change. We call ourselves the Coalition of the Willing (COW) and met each week. My friends in COW, Julie Giannesini, Kirsty Gold, Anna Josephson and Rob Grant, are well-connected in the Mosman community. They are committed and working tirelessly, looking for prospective candidates. They have no political experience, and I have become the one with experience from all that ‘doing’. We hit it off like wildfire.

Around the same time, two people contact me separately and out of the blue: Andy, a young man from Manly Vale and a wonderful mother of four from Seaforth. Both want to hear what I have up my sleeve, and both offer any support they can give. Andy is into IT and social media and the mother from Seaforth is an events queen. It’s as the saying goes: “If no-one does anything, nothing is going to happen.” I am doing, and things are starting to happen.

Denis Ginnivan, the president of Voices for Indi, who I’d met earlier that year in the rural town of Wangaratta at a seminar Voices For Indi put on called Getting Elected to Represent Your Community, introduces me to Gabrielle Chan, a journalist at Guardian Australia. Suddenly, everything comes together. The bank account is open and we’re ready to accept donations. Gabrielle interviews me, Andy takes charge of the website, The mother from Seaforth is out organising the venue for our first event. I’ve been in touch with Tim Dunlop and Jane Caro and they agree to speak at our events.

Gabrielle, about to publish her story, says: “Louise, are you ready for your life to change forever?” I think she’s overblowing it.