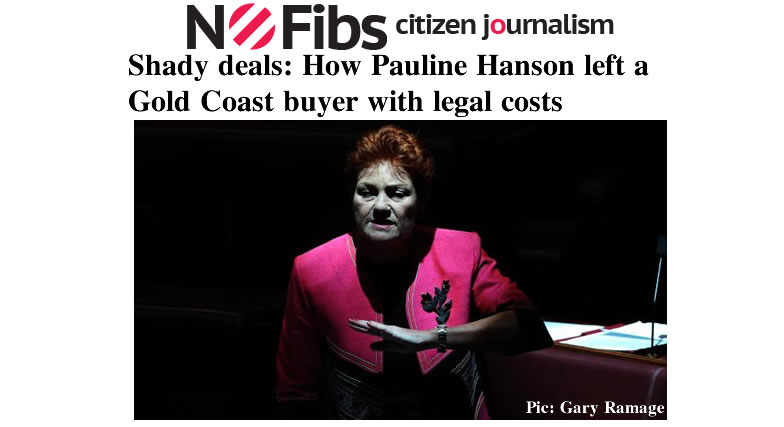 Pauline and Adam Hanson have been trying to offload their Gold Coast property at Biggera Waters since 2008. 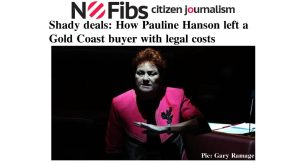 Larry Schlesinger from the Australian Financial Review reported in 2016 that Pauline Hanson and her son Adam were once again attempting to sell their Gold Coast property.

According to CoreLogic records, she tried to flog it in August 2008 for $298,000 – a month before Wall Street giant Lehman Brothers went broke triggering the credit crunch,” he wrote.

She had another go in 2010 with a reduced $279,000 asking price at the same time as she announced plans to deregister Pauline’s United Australia Party and move to the UK. She later changed her mind telling the Sun-Herald the UK was “overrun with immigrants and refugees”.

Shedding some light on why it may have taken so long to sell, Fairfax’s Lucy Macken and Jennifer Duke followed up in a Domain article on February 3, 2017. They revealed that the property had finally been sold but was unable to be settled due to outstanding legal costs.

The sale of the two-bedroom apartment in Biggera Waters exchanged last November for $265,000, but never completed before a caveat was lodged on title by Marino Law partners Robert and Ben Marino,” they wrote.

The stymied sales transaction has left the buyer Wendy Carrafa gob-smacked and unable to pay her own outstanding rates notice on the property because it is not held in her name.

I don’t know where I stand and I’m left in the lurch until it’s all sorted out. I have the body corporate details in my name but the title can’t be in my name until the caveat is lifted,” Carrafa said.

“I was told that it [the caveat] was put on it for money owed to another solicitor.”

Both journalists pursued the story further and were able to reveal more on the scandal in Domain today. The Hansons continued to refuse to comment.

Carrafa was told by her own lawyer that the caveat was on behalf of another law firm seeking payment for outstanding legal debts owed by Adam Hanson, and that the purchase could not be finalised until it was paid and the caveat removed,” they wrote.

The stymied sale left Carrafa with her name on the building’s body corporate, but not on title.

The legal tussle that followed has finally seen the caveat removed and Carrafa has secured her ownership of the Biggera Waters apartment, but she is now laden with an outstanding $550 legal bill of her own that she says should be paid by the Hansons.

“At the end of it all I’m the one who has been left with the legal bill,” she said.

Carrafa’s lawyer Stephen Jensen, from Monkey Conveyancing, said he has sought those costs from the Hansons’ lawyer, but to no avail.

“It shows a lack of respect for one’s own actions,” said Jensen. “Regardless of the law, the moral view is this is your mess, you should clean it up.”

Ms Carrafa told Domain she was once a One Nation supporter.

“I’m a widow and was buying this apartment in good faith for my disabled sister to live in. It’s not fair that they’ve lumped me with this extra bill.”

Carrafa told Domain last week she had previously been a bit of a fan of Senator Hanson, but not anymore. “This has left a bad taste in my mouth. I’m really quite disappointed and disheartened in Pauline Hanson.”