Should Heydon stand down? A #turc legal view by @bowlerbarrister 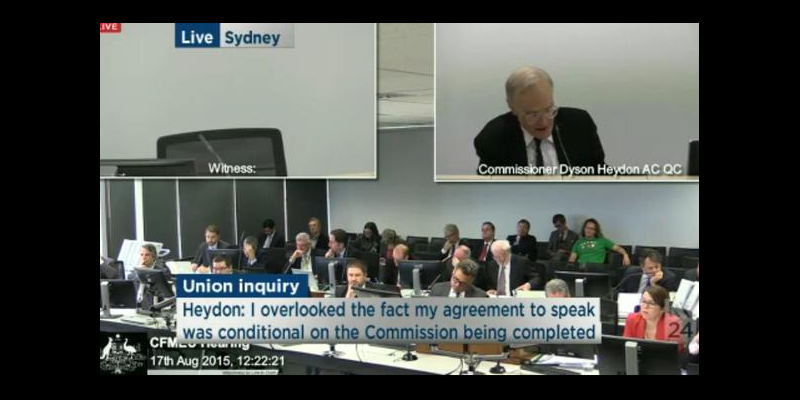 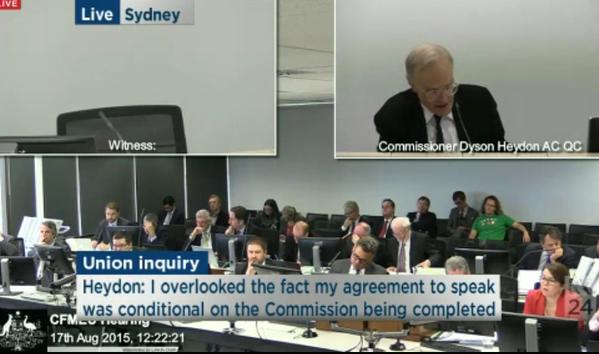 There is often tension in the law as to whether a conservative or more robust approach should be taken in respect of an issue. Opinions may differ according to how an issue is viewed. It might be said that a controversy arising out of the Royal Commission into Trade Union Governance and Corruption has produced some dynamic tension in that regard.

On Thursday 13 March 2014 The Royal Commission into Trade Union Governance and Corruption was established with former High Court Judge, the Hon Dyson Heydon AC QC, as the Commissioner.

On Wednesday 9 April 2014 opening remarks at the Royal Commission into Trade Union Governance and Corruption were made by Commissioner Heydon.

On Thursday 28 August 2014 Commissioner Heydon ruled on what was a bias and conflict of interest claim by the witness Kathy Jackson.

On Thursday 30 October 2014 the Letters Patent establishing the Commission of Inquiry extended the date for the report of the results of the inquiry and relevant recommendations from 31 December 2014 to 31 December 2015.

It would seem from at least Tuesday 14 April 2015 the NSW Bar Association ran an advertisement of Commissioner Heydon speaking at the dinner which included the Sir Garfield Barwick Address.

Drawing on my own modest experience speaking at seminars, the invitation to speak is extended and acceptance confirmed in advance of the specific advertising of the event.

On Thursday 13 August 2015 it was revealed that the 6th annual Sir Garfield Barwick Address was to be delivered by the Hon Dyson Heydon AC QC at a dinner to be held at the Castlereagh Hotel, 169 Castlereagh Street, Sydney on Wednesday 26 August 2015 from 6:00 pm.

With the revelation of Commissioner Heydon accepting the speaking engagement at a Liberal Party fundraiser, whilst still in the role of conducting a Commission of Inquiry into Trade Union Governance and Corruption, the question arose as to whether Commissioner Heydon ought be removed from the Inquiry due to apprehended bias. Since the instigation of the Inquiry criticism had been levelled at the federal government that it was a politically motivated vehicle designed to attack its opponents, the Australian Labor Party.

Conveniently two cases dealing with the issue of apprehended bias are instructive here.

“The principal question is whether either Commissioner is disqualified because of actual or apprehended bias touching matters upon which they are required to investigate and report.”

“In determining the ultimate question of ostensible bias on the part of a Commissioner, the Court must attempt to form some view whether the conduct in the circumstances would give rise to a reasonable apprehension or suspicion on the part of a fair-minded and informed member of the public that the Commissioner will not discharge his task impartially.”

The “If the Commissioner were thought to harbour political prejudice” Test of Thomas J seems problematic for Commissioner Heydon.

When sitting on the High Court of Australia Justice Heydon was part of a majority judgment (with Kiefel and Bell JJ) in British American Tobacco Australia Services Ltd v Laurie [2011] HCA 2 which will give his present predicament little comfort, in my submission. In that case their Honours wrote at paragraph [139]:

“It is fundamental to the administration of justice that the judge be neutral. It is for this reason that the appearance of departure from neutrality is a ground of disqualification [179]. Because the rule is concerned with the appearance of bias, and not the actuality, it is the perception of the hypothetical observer that provides the yardstick. It is the public’s perception of neutrality with which the rule is concerned.”

The appearance of departure from neutrality appears to have been triggered by Commissioner Heydon by his accepting the speaking engagement at a Liberal Party fundraiser, whilst he was still in the role of conducting the Commission of Inquiry.

Commissioner Heydon is required to make findings of credit in respect of witnesses at the Royal Commission into Trade Union Governance and Corruption. He can no longer be seen to be impartial doing so.

With that in mind:

If Commissioner Heydon will not withdraw or stand down, a question arises as to whether Counsel Assisting has an obligation to make an application for Commissioner Heydon to stand down in respect of the bias allegation. A quick reconsideration of Barbaro v The Queen ; Zirilli v The Queen [2014] HCA 2 suggests Counsel Assisting should apply for Commissioner Heydon to withdraw. Whilst that is a criminal law case, it details the roles of the Judge and the Crown Prosecutor in proceedings. It also canvasses the role of defence counsel. It can also be seen to respect the duty to the Court all legal practitioners are required to observe.

In my submission Counsel Assisting has an obligation to preserve the integrity of the Commission of Inquiry and make an application to Commissioner Heydon for him to consider the issue of apprehended bias and perhaps conflict of interest.

In that regard there is merit in making a Dallas Buyers Club LLC v iiNet Limited (No 4) [2015] FCA 838 type preliminary discovery application for the aforementioned correspondence which has yet to be produced, to determine if an apprehended bias application is needed. Such an application may need to be made to another Court, seeing as it potentially involves Commissioner Heydon producing correspondence.

So it can be seen that significant tension has arisen as a result of Commissioner Heydon agreeing to give the speech to the Liberal Party fundraiser. I would resolve the dynamic tension by having Commissioner Heydon withdraw or stand down from the Commission of Inquiry. That would also be an approach which would encourage the community to have confidence in the Courts and the administration of justice.