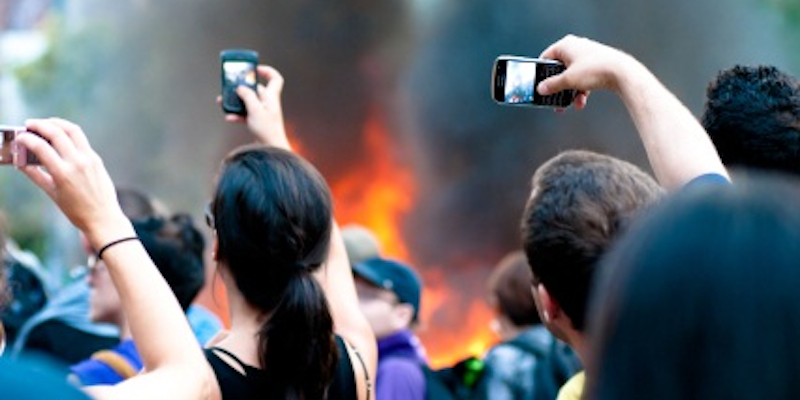 A very simple tweet went out on the same afternoon Fairfax journalists agreed to strike in protest at the company’s plan to cut 80 jobs, mainly in production (layout and sub-editing) and photography.

Since the current Independent Commission Against Corruption (ICAC) hearing will continue through the strike, a citizen journalist (‘CJ’) asked whether any CJs were available to cover today’s ICAC events in lieu of Fairfax. After all, the hearings only get more interesting with every new day.

I was mentioned in the tweet, so got swept-up in the replies, but my tweeted suggestions that CJs and the MSM work together during the strike fell on many deaf ears.

“Stand down CJs,” one tweeter advised.

Which poses the question – are citizen journalists comrades of mainstream media journalists, or are we not?

When the Fairfax redundancy announcement was made, it didn’t register at my workplace – a Fairfax title in Queensland – where I am a part time sub-editor, because we had our heads down meeting our deadline.

I say “we” about citizen journalists because my paid employment as a part-time sub is nothing like my unpaid output as a citizen journalist, which takes up a huge chunk of my week as a sub-editor and writer for No Fibs, my own blogs and other sites.

No Fibs’ editor-in-chief, Margo Kingston, a former Fairfax employee, also identifies as a citizen journalist, most recently in her self-funded reports from the Leard and Bentley blockades, mainly via Twitter.

No Fibs ‘pages’ are filled with articles by academics, public servants, corporate employees, authors, carers, business people, welfare recipients, estate agents and many others who identify as CJs, and a few trained journalists.

We journos amongst them are a mish-mash of survivors from the wash-up of the mainstream media, the shipwreck of which occurred long before this week’s latest round of redundancies within Fairfax.

Which tempers my response to the strike. I empathise, but the axe has been hanging over my journalist’s head for years. It’s become almost impossible to secure gainful full-time work with my subbing skills, and I work alongside plenty of highly-skilled, under-employed journalists.

Today’s strike in the south will barely register up here.

Because many of those who are shocked by Fairfax’s job cuts are placing the strike at the very centre of journalism as we know it, and, far more surreal, they are expecting readers to notice Fairfax journos won’t be reporting today.

I weighed into the Twitter debate about whether a CJ could be described as a rat for reporting from ICAC today, citing lack of pay and lack of affiliation as reasons why it would not be the end of the world if one did.

In the process I was turned into some apologist for the ‘dark forces’ ending our careers, but it has not washed, that argument, ever since I came to terms with why I believe the media has been killed by every single user of the social media’s Publish Button. Journalism will survive, but the media as we knew it is already dead.

It’s very confronting, this moment of realisation, for all journalists – seasoned, emergent, and student. I feel most for the students about to begin a lifetime of HECS debt in return for a degree which will not sustain them with a career. They have been lied to by institutions out of touch with the reality of a dying industry. Savvy 18-year-old tweeters already have more of an audience than most media graduates.

Citizen journalists are perhaps more in touch with the point of journalism – as one tweeter pointed out, journalism is ultimately about communicating to an audience, without whom the job is a one-way street leading nowhere.

@burgewords @kateausburn @MargaretOConno5 I write as CJ from interest.I write to be heard not paid.Ego a bit but reader is what it is about.

We know the role requires much more of individuals than mainstream journalism ever did – taking photographs in addition to writing; creating headlines in addition to stories; proofing our own work and not just writing it; and uploading it onto the largest distribution network the world has ever seen: the social media.

Many citizen journalists struggle with this workload, and there is very, very rarely a pay cheque at the end of weeks of research and/or travel.

Some mainstream journalists have taken to the social media via blogs to complain, and the plethora of spelling errors, layout mistakes and grammatical knots reveal an embedded reliance on production colleagues that may not find sympathy in the wider workplace. Journalists need to be match-fit and multi-skilled, not merely insightful writers.

There is also the issue of access: try blagging your way into a press conference without a mainstream media logo on your lapel, yet citizen journalists manage to get in and report.

For one of us to turn up at ICAC today and live tweet would not be an onerous task. Twitter has provided easy access to our audience, and journalists of all stripes, including Fairfax staff, have rushed to capitalise on Twitter in a way which outstrips mainstream media circulation by an unlimited degree.

That mainstream journalists want the right to access that free distribution network through live tweeting, and get paid, opens them to accusations of having a foot in both the problem and the solution for journalists worldwide.

I defend my colleagues’ right to strike and I understand why they are doing so, but I will also defend any unpaid, unaffiliated citizen journalist who live tweets from ICAC today, as long as they report the truth and they hashtag properly. Crorcet silplneg is oatpnoil.