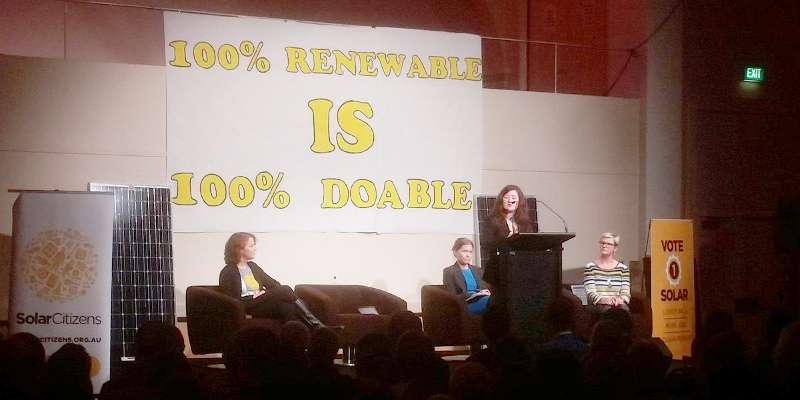 Wentworth is one of the wealthiest electorates in Australia, but it also has the second lowest uptake of solar PV in Australia.

The Paddington Town Hall was used for the forum and had a packed audience. Though Malcolm Turnbull, the member for Wentworth, couldn’t make it, the organisers kept a chair vacant on stage with his name on it.

The Prime Minister was invited to a peoples forum up in Brisbane with Bill Shorten, but declined. Instead he appeared on the ABC 7.30 Report interviewed by Leigh Sales, that proved to be a bit of a trainwreck. He probably would have been far better attending the Paddington Town Hall meeting.

It was appropriate that John Hewson was the keynote speaker as he was the former member for Wentworth and was parliamentary leader of the Liberal Party at the 1993 election. He took to the election a radical economic reform plan called ‘Fightback’ which included a 15 percent GST, and which resulted in the defeat of the coalition parties. The Liberal Party, at the time, had a very progressive environment and climate policy which was overshadowed by the Fightback policy.

Hewson’s talk contained some humour while also strongly articulating the need for businesses to take up the massive opportunities in renewables and transition to low carbon economy. There was some political insight and commentary, but the main focus was on the need for bipartisan policies in transitioning to a zero carbon economy through renewables.

“I must say I have been particularly frustrated by what has been a very painful process with the response of this country to climate change and to the development of an effective solution in terms of renewables.” Hewson said. “We have lost about 30 years in responding to climate change.”

Hewson also outlined his latest business venture: Solastor – a $1.2 billion proposal for a modular baseload solar thermal power station near Port Augusta. The first stage would be a power station generating 110Mw in Winter, 170Mw in Summer. He was pleased to say the proposal launch had bipartisan support from both Liberal and Labor. RenewEconomy reported on the launch: Hewson’s Solastor promises world’s cheapest 24/7 solar power.

“I think we are at the beginning of what will be a renewables revolution in this country.” concluded John Hewson.

Beside John Hewson, Nicky Ison and Miriam Lyons presented GetUp! and Solar Citizen’s Homegrown Power Plan, which shows how Australia can transition and repower homes and businesses with 100{17ac88c265afb328fa89088ab635a2a63864fdefdd7caa0964376053e8ea14b3} renewable power by 2030. Nicky Ison told the crowd that “We need all parties to commit to a just transition to clean energy” and “we need to change the rules of the games so solar is fair and accessible for everyone”.

“In a 100 percent renewables future – there is no place for the fossil fuel industry” said Miriam Lyons, to strong audience applause. “We want to see a planned and orderly transition that looks after workers on the way. We need to prune out the dead wood for new shoots to grow…and the owners of existing [power] plants know this.”

Claire O’Rourke from Solar Citizens emphasised that renewable energy target needs to be 100 percent by 2030, and that there is a jobs and growth bonanza if we do aim for this target. But the target also needs bipartisan support. She highlighted that “ARENA is looking to have 1 billion dollars cut from its budget.”, with cries of “Shame!” from the audience.

The forum also heard from Evan Hughes, the Labor candidate, and Dejay Toborek, the Greens’ candidate for the Wentworth electorate. Solar Citizens have produced a scorecard rating party support for solar for Wentworth.

Michael Dillon, an engineering student and member of AYCC wrapped up the event.

Let me begin by paying respects to our indigenous elders past and present and I look forward to the day when we give them proper recognition in the constitution.

I think I first held a public meeting in this room in 1985 when I was being preselected for the Liberal Party in the seat of Wentworth. 31 years. Good to see most of you here again.

I must say I have been particularly frustrated by what has been a very painful process with the response of this country to climate change and to the development of an effective solution in terms of renewables. 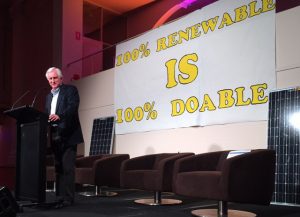 People didn’t really read my Environment policy back in 1993. For some reason they got distracted by something called the GST. It never came to the fore. We called for a 20 percent cut in emissions by 2000 off a 1990 base. Today we still have to see whether we can achieve the 5 percent cut in emissions by 2020, or how we are going to achieve the 26-28 percent emissions that we committed to in the Paris Agreement by 2030. I was more inclined to say the number for 2030 should have been double that, pretty much along the lines of the Climate Change Authority recommendation.

The way I look at that, is we have lost about 30 years in responding, at the pace we should have responded to the challenge of climate change.

As someone who is involved in business I have seen that last 30 years as a lost opportunity. For the development of jobs and growth, new businesses, new industries, thousands and thousands of jobs. Over that period I spent quite a lot of time trying to prove the point. We set up in the 1990s the National Business Forum on Sustainable Develomment, to try and start to educate the business community about the options that were possible in a response to climate change.

We talked among ourselves for a few years and then brought Al Gore to Australia in 2003 and elevated the debate a bit. Over that period since the late 1990s I started, or chaired, or was instrumental in a number of businesses that prove that the opportunities are very real. They don’t have to cost you growth, they don’t have to cost your jobs, in fact they promise the opposite.

The first thing we did was to buid a household garbage recycling plant at Eastern Creek, extract the methane gas as one element of that and turn it into electricity to run the plant and sell it into the grid. That was done – we started the project on the first day of the [Sydney] Olympics I think in 2000.

Then energy efficient light bulbs was the second business. The third one was green data centres. The fourth one was to build the world’s largest biodiesal plant in Singapore. Today I am working pretty much on baseload solar, and another project in north Queensland to turn sugarcane into electricity and ethanol.

They are just a few examples of new industries and new growth opportunities. I am fascinated to see that we have got to make a transition in this country in two respects. One: we are transitioning from an economy based on resources boom, construction boom to whatever. In this election campaign I am struggling to see what the ‘whatever’ is.

The second transition is to a low carbon economy. There is a lot of debate over whether we can do that. Whether 100 percent renewables is a realistic objective.

Towards the end of last year in the lead up to Paris, I was asked by Jay Weatherall along with a couple of others to see whether he could – as he was chairman of the sub-government level in Paris – whether he could realistically commit the state of South Australia to zero net emissions by 2050.

We did quite a lot of work preparing that study, quite a lot of modelling behind that study and we demonstrated that South Australia is a leader in the renewables sector in this country. Now 41 percent of its power generation is renewable, compared to about 6 percent in this state [NSW]. They are way ahead.

But the issue was could he realistically go to 100 percent? and what would it take. We concluded that he could be there around the middle 2030s, a 100 percent genuinely renewable in South Australia. He could become an exporter of renewable energy to the rest of the country.

If we couldn’t get an Emissions Trading Scheme in this country to put a price on carbon, then we recommended what he might do is join the California scheme and sell his credits into the California scheme for billions of dollars to further fund the development needs of the state. I am very confident that a 100 percent renewables is a realistic objective. It is just taking a while for our political system to get there. Because in all the time since the late 1980s and early 1990s we have just seen a lot of short term politics, not too much medium term stuff either.

I was astounded to hear John Howard admit in 2013 at a speech in London: Nigel Morson was the host, a prominent climate denier who I never actually debated on this issue: he is not as strong as you might have expected. But to that audience Howard admitted openly that he played short term politics with the issue. When it suited him he supported Emissions trading scheme, when it didn’t suit him he opposed it. And then he made the incredible statement that at that time and today I am sure he is an agnostic when it comes to climate change. And he prefers to rely on his instincts. They were the two key statements he made.

Yesterday I had the opportunity, as was mentioned in the introduction, to launch a project. The first of what we believe to be many to produce baseload solar thermal 24/7 at the lowest cost anywhere in the world. Its Australian technology, its very sophisticated technology, proven technology, plants have been built in Australia and been built in China. To my mind I could not understand why when I got involved a bit over a year ago why we weren’t doing it in Australia.

So we put together a proposal for a $1.2 billion 110Mw in Winter, 170Mw in Summer stage One project in Port Augusta in South Australia.

Now if you followed the debate In South Australia you will know that recently Alinta has closed the coal fired power station which is about 640Mw of baseload power. The transition in this area is a very significant challenge. From our point of view it is a logical place to put a plant: the sun intensity is right; its a port; its close to the grid. A lot of compelling reasons why we should do it there, but mostly the imagery in the background of tearing down a coal fired power station and putting up a solar thermal plant to deliver 24/7 baseload power, the cheapest in the world, is too good to resist.

I think we are at the beginning of what will be a renewables revolution in this country.

How the evening unfolded on social media