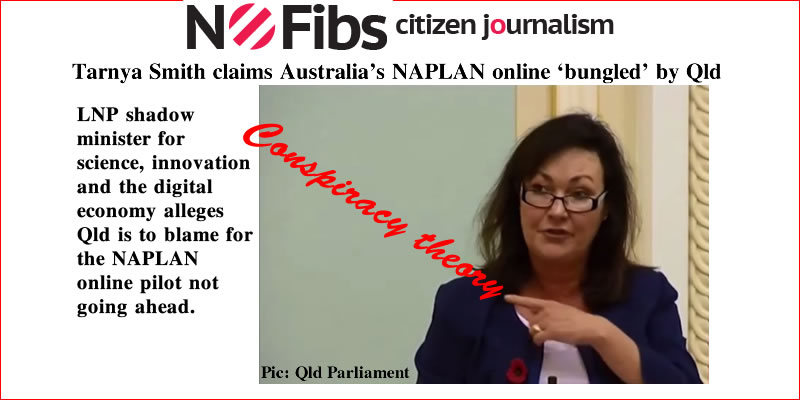 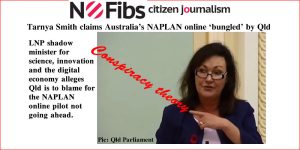 Queensland this week joined New South Wales, Tasmania, and the Northern Territory to become the fourth state or territory to pull out of the online pilot for the National Assessment Program – Literacy and Numeracy (NAPLAN) program. Students will sit the exam in the normal handwritten method after trials found faults with the online technology.

However, the LNP’s shadow science minister Tarnya Smith made bizarre allegations yesterday against the Queensland Labor government accusing it of ‘bungling’ the nationally developed software. Ms Smith made her claims online but didn’t provide any further evidence to support them.

“Here we go again. Another IT bungle from this incompetent Labor Government. #ITFail #AllTalkNoAction #qldpol”, she posted simultaneously to Instagram and Twitter, providing only a photo of herself.

The Opposition smells another IT bungle in a last-minute decision to abandon NAPLAN tests online. @ShaneDoherty9 #QldPol #9News pic.twitter.com/w8wRh6ygQq

When pointed out by NoFibs that NAPLAN was a national testing system, the Mount Ommaney MP repeated the claim and seemed to infer a conspiracy theory involving ALP staffers.

Dr John Harrison from the University of Queensland’s School of Communication and Arts also sought clarification as to what Ms Smith was referring to.

Yes, but what was the bungle? Your tweet tells us nothing.

However, he was referred back to the Nine News Queensland Tweet.

Ms Smith later claimed a Labor minister had said NAPLAN would be online by August 2015 but gave no further references.

In the Nine News report, executive Director of the Queensland Catholic Education Commission Dr Lee-Anne Perry explained that the problem was to do with the layouts.

“Instead of seeing, for example, five elements, (they) might only see three elements of a maths question and then obviously they can’t do the question,” she said.

“It’s not a reflection on Queensland and its readiness. It’s around the testing platform which has been nationally developed.”

Queensland Science Minister Leanne Enoch also explained that the Queensland government worked in collaboration with the federal government ahead of NAPLAN testing.

“It’s not just the state government, of course, it’s the federal government that is actually working with us on this. We feel as though it is not right just yet,” she said.

Sam Pidgeon from the Queensland Teachers’ Union made it clear that the online format should not go ahead.

“If the test isn’t working, then no one wants to be putting students through that level of stress or anxiety,” she said.

However, Ms Smith refused to accept any explanations. She attempted to link NAPLAN to the Queensland health payroll system which broke down under the Bligh Government.

“I mean, who can forget the health payroll debacle,” she said.

Ms Smith was out campaigning in her electorate of Mount Ommaney today. She faces a tough battle to retain the marginal seat against Labor’s recently endorsed candidate, Jessica Pugh. Ms Pugh also contested the seat in 2015 with a 16.3 percent swing to her.

Results for Mount Ommaney from the 2015 Qld state election.

Honoured to announce that I have been endorsed as the @QLDLabor Candidate for Mount Ommaney. #qldpol https://t.co/ahDQJeJSe1