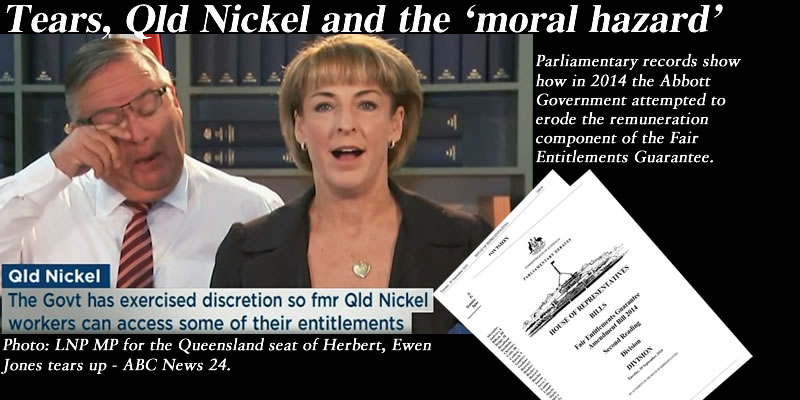 Parliamentary records show how in 2014 the Abbott Government attempted to erode the remuneration component of the Fair Entitlements Guarantee. 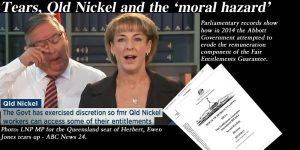 Queensland Coalition MP Ewan Jones teared up on Friday as he spoke of the hardship facing workers in his electorate of Herbert after the collapse of Clive Palmer’s Queensland Nickel refinery near Townsville.

“This is a tough day,” he blubbed before being consoled with reassuring pats from Senator Michaelia Cash.

Cash spruiked her government’s commitment to the workers through the Fair Entitlements Guarantee (FEG) scheme.

“I have exercised discretion under the Fair Entitlements Guarantee scheme so that former Queensland Nickel workers can access a contribution towards their unpaid entitlements,” she said.

However, Shadow Minister for Employment and Workplace Relations Brendan O’Connor criticised the crocodile tears of the Jones and Cash show.

“He (Jones) voted to cut their entitlements under law,” O’Connor told the media.

Speaking from Japan, Prime Minister Malcolm Turnbull countered by saying that O’Connor had no heart.

Yet in 2014, it was a very different story from the budget surplus seeking government of Tony Abbott. In his second reading of the Fair Entitlements Guarantee Amendment Bill 2014, Leader of the House and Minister for Education Christopher Pyne described the FEG scheme as a ‘moral hazard’; a righteous threat to life.

“This level of protection is very generous by community standards. It creates a moral hazard—it provides an incentive for employers and unions to sign up to unsustainable redundancy entitlements, safe in the knowledge that if the company fails, the Fair Entitlements Guarantee and the Australian taxpayer will pay for it,” he told the House of Representatives in 2014.

The objective was to save the government money by not having to pay out as much to cover a collapsed company that had no funds to pay out its’ sacked workers. In summary, the bill amended, “the Fair Entitlements Guarantee Act 2012 to cap the maximum amount of redundancy pay entitlement available under the Fair Entitlements Guarantee scheme at 16 weeks; and make technical amendments to clarify the operation of the scheme.”

Sorry for getting teary. It is really the end of the line for a lot of people. The FEG is good for the people but bad for Townsville city

The current government scheme ensured a redundancy payout of four weeks for every year of service the employee had worked at the company. However, under the proposed changes, when the 16 week cap was reached it would then be up to those long-term employees to join the queue of creditors for any additional payments.

The government also wanted to toughen the criteria for workers to be able to access the scheme by requiring them to show that they had attempted to recover their entitlements from the failed employer.

Pyne also told parliament, “It also amends the act so that the issue of whether a person has ‘reasonably pursued’ a debt owed by the employer is not a consideration for eligibility for any payment under the scheme—it is a matter that is dealt with when calculating the amount a claimant is owed.”

The bill passed the HoR with a majority of 30, Jones of course, being among the government’s 83 ayes.

The bill reached the Senate where Cash waved it through on second reading by submitting to Hansard the same ‘moral hazard’ speech Pyne had given in the HoR.  Further consideration of the bill was scheduled by Acting President Nova Peris for October 27, 2014.

It never happened. Records from Hansard of that day show much of the Senate debate was given over to condolences for former Prime Minister Gough Whitlam who had passed away on October 21, 2014. A long list of senators from all sides of politics stood to speak.

To this day, the legislation status remains as; “Before Senate”. Had the Abbott Government successfully passed the 2014 legislative changes the Queensland Nickel workers would now be facing an unknown set of hurdles in chasing Clive Palmer for their full remuneration.

Now that really would be grounds for tears.

Queensland Nickel workers and any other employee who have lost entitlements from the collapse of their employer can access the Federal Government’s Fair Entitlements Guarantee here.

A list of MPs and Senators speaking for and against the Fair Entitlements Guarantee Amendment Bill 2014  can be found here. 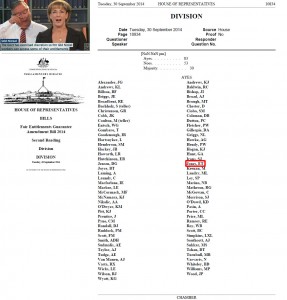