The Arrrs have it – Arts Minister updates the House on Captain Jack Sparrow, @Qldaah #qldpol 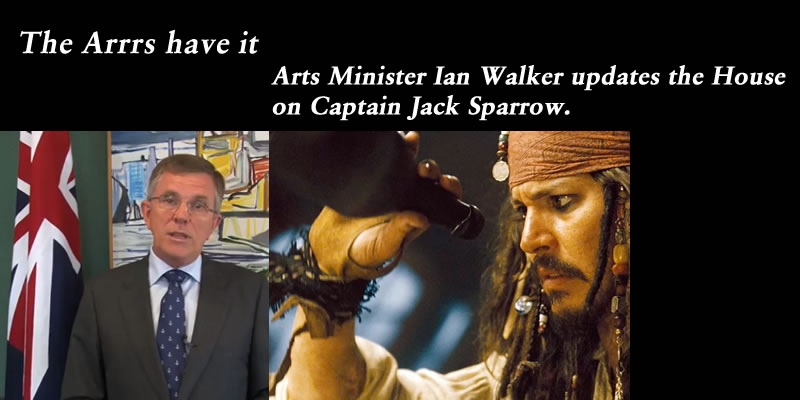 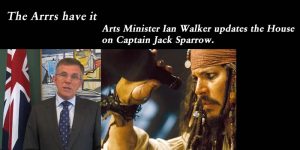 THURSDAY: Amid guffaws and pirate noises from fellow MPs, Minister for Science, IT, Innovation and the Arts Ian Walker updated the House on Queensland securing the location for the filming of the fifth movie in “The Pirates of The Caribbean” franchise. Amid visions of smoke ridden sea pitched battles, Captain Walker detailed how Queensland “fought off challenges” from Mexico and southern Australian states. Meanwhile, revelations were made on how Admiral George Brandis had parleyed exclusively for his home state to be host. Walker also assured the crew that the projected $100 million bounty would boost both the Queensland economy, tourism and the local screen industry.

Members broke into laughter and “Arrrs” when Walker spoke of “My Mistress”, detailed how he could not help it if he mixed with the stars and how he had tracked the movie across the internet seas of Facebook and Google. Finally, Captain Walker pledged the world’s best rum (Bundaberg) would be waiting for his fellow captain, Jack Sparrow.

LNP MPs making pirate noises as @IanWalker_MP talks about pirates of the caribbean movie being made in Qld. #qldpol

For more on how Queensland secured the hosting of “Pirates of the Caribbean 5”, see our @NoFibs report here, ‘A pirate led recovery’.

Below is an Hansard extract of the update. The full transcript of the day’s events can be found here.

Hansard – Pirates of the Caribbean 5

Hon. IB WALKER (Mansfield—LNP) (Minister for Science, Information Technology, Innovation and the Arts) (9.51 am): The only eagerly awaited pirates in the world are about to raise the Jolly Roger in Queensland. It gives me great pleasure to update the House on my recent announcement that the fifth instalment of Pirates of the Caribbean will be filmed exclusively in Queensland. Make no mistake: Queensland hunted hard and smart to secure this deal. We fought off challenges from Mexico and from southern states, and we worked closely with our federal counterparts, most notably Queensland senator and Federal Minister for Arts, the Hon. George Brandis QC, to broker this deal exclusively for Queensland. Pirates 5 will be the largest international feature ever to film in Australia and is confirmed for the Gold Coast Studios and Port Douglas, with more Queensland sites to be announced. The film is an important boost to  Queensland’s screen industry and  the  state’s economy, bringing in  at  least $100 million to Queensland and creating thousands of local jobs for cast, crew, stunt performers, extras and contractors. One of the first hires on Pirates 5 was a Queensland production manager, Jennifer Cornwell, who has just finished working on the local film My Mistress.

Mr WALKER:  Not  my  mistress;  My  Mistress.  These  international  blockbusters  offer  an unprecedented stage for our Queensland screen professionals. Pirates 5 is a considerably larger production than San Andreas, which employed more than 3,000 Queensland crew, cast, extras and contractors. It is also larger than Angelina Jolie’s Unbroken, which employed about 3,180 locals.

Mr WALKER:  Madam  Speaker,  I  cannot  help  it  if  I  mix  with  the  stars.  It  is  what  it  is. Rockhampton-born actor Alex Russell, who secured a role in Unbroken, has already gone on to act in two further international features, giving us a clear example of the success that breeds success. As the pirates go up the coast, an estimated 20,000 bed nights will be booked in Far North Queensland during the tourism low season, which will provide an incredible boost to the region. By attracting Pirates 5 we stimulate tourism, meeting one of our four-pillar economic objectives to double tourist expenditure in Queensland by 2020. Pirates will promote our state to the film’s global fan base, which is represented by 24.4 million followers on its official Facebook site, that is, 1.1 million more people than the Australian population. More than 15,000 Pirates 5 results appear on Google, including headlines from countries such as Malaysia, India, USA and UK. Together with our tourism colleagues, we intend to fully maximise the exposure to Queensland, particularly tropical North Queensland, in the lead-up to the film’s release in 2017. That is just a taste of what we are going to do with Pirates. And if it is the world’s best rum that Captain Jack Sparrow has a thirst for, we have that, too.