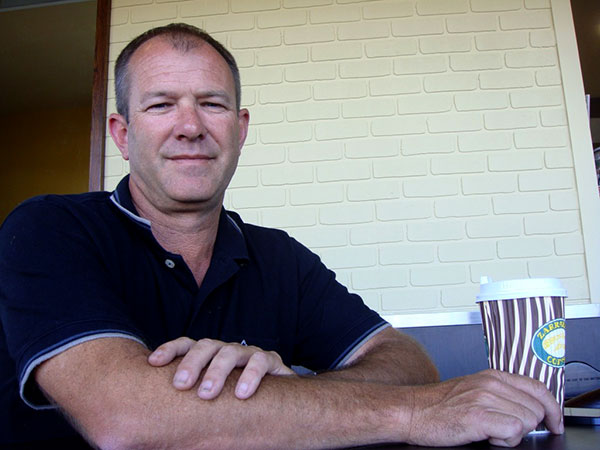 Blair Brewster is two men – he is the shiny ‘businessman you can trust’, staring out from his campaign posters in yellow tie and well cut suit; and he is the bloke in the black t-shirt who met me for coffee in Upper Coomera, up the road from his house on the fringe of the Forde electorate.

Brewster is 46. He’s the CEO of Gladstone Pacific Nickel. He’s the founder of the Coomera Hockey Club. He’s the father of three school-aged kids who under no circumstances is missing his kid’s grand final this Friday night to attend a candidates’ forum.

Brewster’s a Melbourne man who left school at Year 10 to push trolleys round a Coles car park, had a ‘brainwave’ that he didn’t want to do that for the rest of his life and moved up the chain to fruit and veg, slid down the ladder to train as a baker’s apprentice and from there moved into sales and marketing selling bakery equipment. From there he jumped sideways to sales for Smith’s Chips, after which he leapfrogged into his own business, a Melbourne-based recruitment company.

Seven years ago he moved north to take the helm of Gladstone Pacific Nickel. With modern technology, he says, he can do the job anywhere. Even Upper Coomera.

Like Uncle Clive, he’s a self-made man. And self-made men rarely forget the world that shaped them.

All Brewster’s policies come back to jobs.

“The ALP and the Liberal Party have had decades to deliver on jobs and infrastructure for this electorate,” he said.

“They talk about it, but it’s all one-liners. We’ve got one of the highest youth unemployment rates in the country – what do they deliver?”

I ask what he’ll deliver.

“An international airport at Jacob’s Well,” he said.

“The concept plan is ready to go; the flight path has been approved. It would be the only airport in Australia that could take the largest cargo planes.

“Major companies would set up here, like Virgin. There’s a business hub nearby in Yatala – the flow-on effects would be enormous in cargo, transport, catering, supplying local services.

“There’d be jobs in its construction and jobs for life for families in the area. And infrastructure – roads, highways, rail.

“And 26,000 people wouldn’t need to drive from the Gold Coast to Brisbane and back again every single day just to go to work.”

With a mind to the two mainstream parties’ grip on the Australian electoral landscape generally, and Forde in particular, I ask Brewster who he thinks will win the election.

I’m referring to his rivals, the ALP’s Peter Beattie and the LNP’s Bert van Manen, who is the sitting member.

“Clive Palmer,” he says. A slight smile forms on his face when I laugh out loud.

By way of explanation he tells me he’s fed up with the stranglehold of the two major parties on Australian politics.

“I was polled the other day,” he said. “The man on the phone asked me who I thought would make the better prime minister, Kevin Rudd or Tony Abbott.

“And then he asked me who I thought would win the seat of Forde, Peter Beattie or Bert van Manen, and I said ‘Blair Brewster’.

“Why is everyone so scared of including The Greens or the Katter Party or Palmer United in these polls – and why are Rudd and Abbott too scared to include the rest of us in debates?”

Brewster says the Palmer United Palmer is not a one-hit wonder and is not going away.

“We’ve got 150 candidates standing for every seat in the House of Representatives in this country.

He is referring to the political tone of the 43rd parliament, ‘the hung parliament’ – and one of Palmer United’s key policies: the abolition of professional lobbyists from political party membership and from holding government office.

“(Clive and I) were Liberal Party members, but we disagreed with the direction the party was taking – particularly the influence big business had over party policy,” he said.

“They weren’t in there for the good of the nation, they were there to benefit their own pockets – and they’re succeeding with the support of a tunnel-vision media.”

Brewster and I skip through a range of topical policies. His answers were, in brief:

Global warming – “Australia cannot go it alone. We have to take the time to work with the rest of the world to develop action plans.”

Asylum seekers – “Let them fly in and process them at the door. Set up processing facilities for those in UNHCR camps who do not have the resources to fly in – this is not an open-the-floodgates policy.”

Environment – “Green space is important, but so is community development.”

Utilities & services – “Health, water, power – all should be in government hands, not for profit. Who used to employ the vast majority of apprentices in this country? Government.”

Our interview closes and I walk with Brewster towards his car. The trailer behind it is emblazoned with pictures of the campaign businessman in the yellow tie. He notices my scrutiny – “that’s me too,” he says easily, before proudly proceeding to tell me all about the trailer. 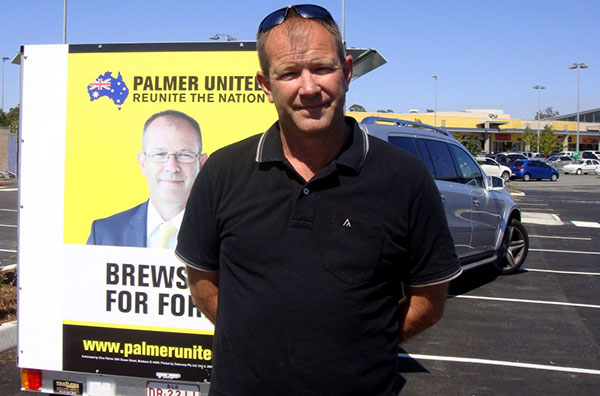 “I designed this,” he said. “And I built it, and I screwed in every one of those screws. And I wired it.

He points to the LED lighting along the top edge.

“I can turn the lights up and down from inside the car,” he said.

“Came in handy last night when the traffic on the M1 crawled from four lanes to one. I just sat there and turned on the lights.”