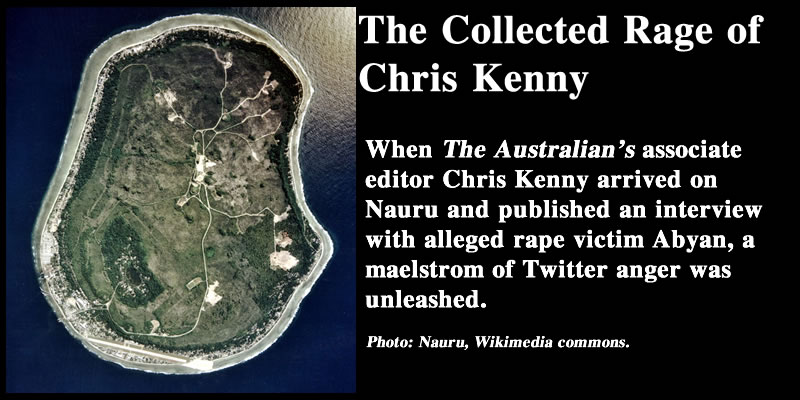 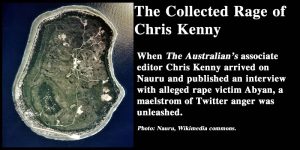 The Australian’s associate editor and former chief of staff to Malcolm Turnbull, Chris Kenny was the first and only journalist to be granted a visa to visit and report on the Australian asylum seeker detention centres located on the island nation of Nauru. Neither the paper or Kenny would confirm if the $8,000 application fee was paid.

A storm of criticism hit Kenny when he filed a report on alleged rape victim Abyan. As abortion is illegal on Nauru, the pregnant mother had been flown to Australia for the procedure. It did not take place and Abyan was returned to Nauru. The Australian Government maintained that she told officials on Australian soil that she did not want an abortion. Abyan has since denied she stated this. Kenny found that she still wanted an abortion but not in Australia, she wished to go to another country.

Sparks  flew when Fairfax journalist Tom Allard interviewed refugee rights advocate Pamela Curr and published, Somalian refugee Abyan becomes a political pawn after abortion request on Nauru, in which the visit of Kenny to Abyan’s home was challenged. Curr said she was on the phone with Abyan as Kenny arrived with police at her home. Kenny disputed this and called both Allard and Curr liars.

In the period since, Kenny has received plenty of support from journalists in the Australian media such as Paul Murry and Miranda Devine. His Twitter feed is littered with support from his readership who see him as a champion for exposing a refugee activist plot.

It would seem, unless you agree with Kenny wholeheartedly, that it is futile to argue with him. Such opposition only seems to generate further columns or editorials. Kenny refers to those skeptical of his reporting as leftoids, lunatics and liars. After a request from Kenny, Labor MP for Moreton, Graham Perrett deleted a Tweet in which he’d challenged Kenny’s authenticity and apologised.

The Collected Rage of Chris Kenny after the Abyan Interview

Two requests have been filed by Jason Wilson from The Guardian.