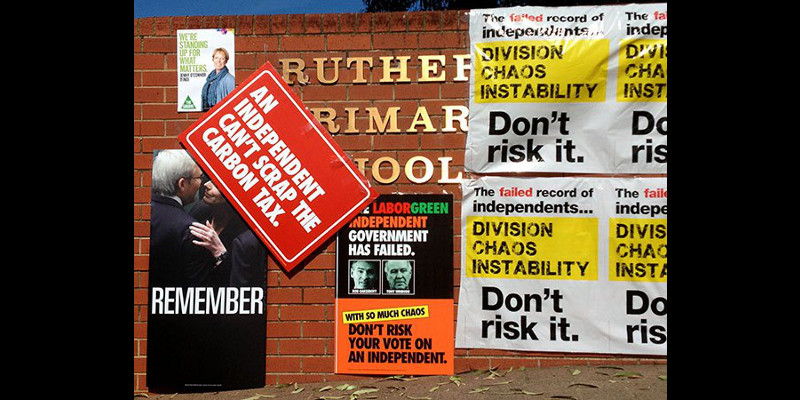 [dropshadowbox align=”none” effect=”lifted-both” width=”300px” height=”” background_color=”#ffffff” border_width=”1″ border_color=”#dddddd” ]Margo: Cam Klose was the Voice for Indi’s media person during its campaign to elect Cathy McGowan at the last federal election, and wrote twice for No Fibs during the camapign, Chasing involved democracy in Indi: @indigocathy v @SMirabellaMP and Cathy McGowan’s campaign for Indi enters the national spotlight as tweeps get the message out. Here is his response to allegations of impropriety by the campaign team made recently in The Australian. No Fibs’ #Indivotes campaign archive is here.[/dropshadowbox] 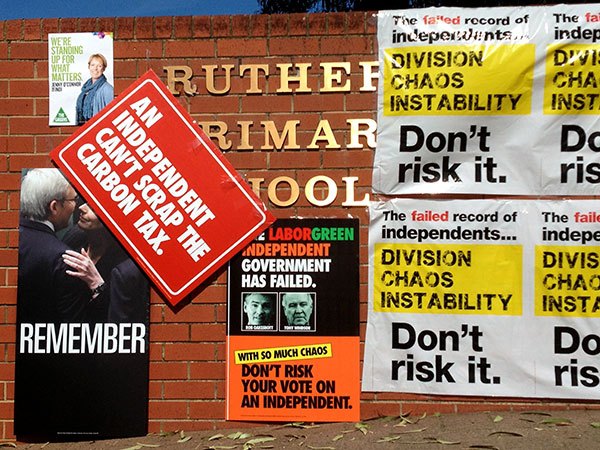 The constituents of Indi understand the Coalition’s tactics better than most. In the 2013 election, voting booths were postered, sometimes for 100s of metres in either direction, with negative, dramatic signs warning people not to vote Independent. It didn’t work. People grew tired of the negativity of the Mirabella campaign and voted overwhelmingly in support of change.

The positive, values based, grassroots movement that propelled Cathy McGowan into power and kicked Sophie Mirabella out into the political wilderness became a beacon of hope for people across the country who were disenchanted by the lack of representation in the current political system.

But the Liberal Party seem not to have learned its lesson in Indi. On Saturday we caught a glimpse of their strategy to try and win back the seat at the next election. And surprise surprise – it’s a negative one.

The credibility of the campaign has now been put on trial by the Murdoch media.

It started when The Australian published the surprising claims that the McGowan campaign had committed fraud by encouraging young people, who didn’t live in Indi to vote in Indi.

If any fraudulent activity occurred, I hope the AEC do uncover it. However, having worked on the campaign from the very beginning, I am confident we will be proven to have done nothing wrong. To my knowledge, never once did we ever explicitly or implicitly ask people to do anything illegal.

Indeed, before we even thought we had a chance to win the seat of Indi, our goal was to engage young people in the political process and try and get some of the estimated 400,000 young people across the country to enrol to vote. Politics can seem so alienating and far removed from the lives for many Australians, let alone young people who couldn’t feel less interested in the past few elections (probably because they have been run almost solely on issues endemic to Western Sydney).

But we wanted to make politics relevant to the young people of Indi, and perhaps even fun! To this extent we hosted a breakfast for first time voters to talk about issues they cared about, uploaded videos to our YouTube channel that students had made and created fun blogs such as the Cats for Cathy to emphasise that politics doesn’t have to be always so serious.

And it worked. Not only with the young people of Indi, but to everyone. While the rest of Australia was suffering through one of the most tedious election campaigns ever, the people of Indi tuned in either online or on the ground to take part in the largest rural political mobilisation in recent history.

The Australian contended that the Indi campaign had sought to enrol people in the electorate of Indi illegally. Nothing could be further from the truth.

The poster child of the Australian’s smear campaign was a girl named Sophie. She was a student who lived in Melbourne but had changed her voting enrolment back to Indi because she wanted to make her vote count. For the first time in her memory she was able to vote for a candidate in her home electorate that she was passionate and proud about.

As a country kid, where you call home can be a pretty tricky one. I remember leaving Yackandandah to go to Melbourne for university, and during my three years at university I lived in four different houses. I also would often travel during the summer holidays. For this entire period of my life I had no fixed address that I could call home. I also still felt such strong emotional and spiritual ties to the countryside around Yackandandah, and if anyone asked me where home was, I would probably have said my parent’s house in ‘Yack’.

Fortunately the AEC have provisions for this. They state that the term “permanent residential address” and “usual place of residence” can be clarified as: ” the address you intend to return to even if you are living somewhere else temporarily”.

Similarly, for students in our situation they say: while studying at university you can remain on the electoral roll for your home address.

Indeed, to support democracy, the AEC seem keen to “get” people on to the roll so they don’t miss out on voting. They also want to keep them on the roll, hence asking for relevant contact information. This is because if they contact you and you don’t reply they remove you from the roll.

Going by this then, there is not only no case against the young Indi resident, Sophie, but the recent attacks on her personally seems to undermine the attempts by the Australian Electoral Commission to foster a keen interest in democracy across Australia.

On Monday the Liberal Party’s ties to these stories in The Australian became clearer with Liberal Party president, Brian Loughnane weighing in and stating:
“There was an organised operation to enrol people who were not entitled to be enrolled in Indi.”

On the same day Sophie Mirabella and Sussan Ley (the Liberal MP for Farrer) were at Barnawatha, a town just down the road from Cathy’s house, to announce $1.8 million of funding in the budget to improve roads.

The battlelines for the next election have been drawn.

The question on my mind though is whether the Liberal Party actually believe that it was a fraudulent, vitriolic campaign that ‘pulled the wool’ over the people of Indi’s eyes and resulted in Cathy winning, or whether they are just attempting to smear her.

One would assume it was just a smear campaign, but seeing how out of touch they are on so many other issues, I am left with a niggling doubt that perhaps they actually believe their own fantasies.