The insidious culture of ‘cash for’, the #qldpol weekly: @Qldaah 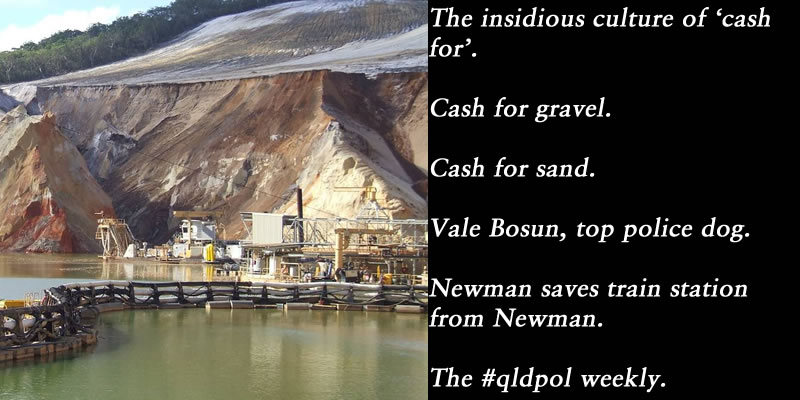 Claims of interference in CMC investigation.

This week ABC reporters Mark Willacy and Mark Solomons revealed how Karreman Quarries had escaped prosecution over extraction of gravel from the upper Brisbane River.

Farmers in the area had long been complaining about the destruction of river banks along the waterway since the company set up business in 1996.

However, a complaint directly to Premier Campbell Newman from farmer Neil O’Connor received confirmation that the company was operating illegally without a state permit to mine the river. Newman asked the Minster for Natural Resources, Andrew Cripps, for a full investigation. His department returned a finding that a prosecution case could be built and ordered the company to cease operations in the river as of February 2014.

However, as the case was being put together, Deputy Premier Jeff Seeney became aware of the findings and ordered a complete reversal of the legislation, backdating it by four years. The legislation was not debated in parliament and slipped through almost unnoticed.

Seeney’s diary showed a meeting with quarry owner and Liberal National Party (LNP) donor, Dick Karreman. Karreman had donated $75,000 to the party in the lead up to the 2012 election.

Seeney denied allegations of favouritism and blamed the Labor party for introduction of the laws requiring companies to seek a permit to extract gravel from the riverbed.

Not only does this case bring into question democracy in Queensland but raises questions as to just who is running the state, Campbell Newman or Jeff Seeney?

In October of 2013, ABC 730 exposed another mining scandal. Operators of the North Stradbroke sand mine, Sibelco, had their license extended by the Newman Government. This was despite an agreement between the previous Labor government and the traditional owners, the Quandamooka people, to close activities down by 2019.

The Quandamooka felt betrayed and ignored by the Newman Government’s decision and recently commenced legal proceedings against the backflip in the federal court.

Campbell Newman had always campaigned on a ticket of extending the lease. However, after the election it was revealed Sibelco had donated $91,000 to Newman’s 2012 election campaign and sent 98,000 letters to residents of the seat of Ashgrove urging them to vote for Newman on the sand mining ticket.

This week, Queensland’s Labor party filed a complaint with the Crime and Misconduct Commission (CMC).

With the CMC firmly under the government’s control, the complaint is likely to be dismissed. However, this may be exactly what Opposition leader Annastacia Palaszczuk is counting on to highlight endemic problems in the integrity of the Newman Government. Stay tuned to #qldpol.

When asked by the media about the investigation and donation, Agriculture Minister John McVeigh shrugged his shoulders and flippantly remarked, “that’s part of our democracy”.

Premier has been benificiary of sand mining company ‘that’s part of our democracy’ @9NewsBrisbane #qldpol pic.twitter.com/rbTa9O4Woi

Claims of interference in CMC investigation.

This week, Queensland Greens Senator Larissa Waters used parliamentary privilege in the federal senate to condemn the Newman Government over the coal seam gas (CSG) industry in the state. She questioned two meetings Campbell Newman had directly after 2013 allegations were made to the Crime and Misconduct Commission (CMC).

Campbell Newman had met with CMC officials on February 20th, 2013 and then the following day with Rob Millhouse who was vice-president of policy and corporate affairs with Queensland Gas Company (QGC).

Newman confirmed that he had discussed allegations of inappropriate approvals with the CMC but couldn’t recall the exact nature of the discussions.

“Well, I raised it with them. I can’t remember if we raised it in the meeting on the 20th but then I might have because I might have said, ‘have you got my letter reporting this serious allegation about approvals?’,” he said.

In April 2013, former senior environmental specialist Simone Marsh featured in the ABC @4Corners program, “Gas leak!”. She exposed failings of the previous Labor government in meeting environmental approvals in the formation of the CSG industry. Her complaint to the CMC focused on the rushed process she was forced to work within when supplying the environmental impact assessments.

A question hangs over the CSG industry. Have the correct environmental processes been followed? If not, both the Labor and LNP governments could be at fault.

In an unusual twist, the CMC issued a statement disputing Senator Waters’ speech. The CMC rarely comments on matters discussed in the public arena.

The statement was tweeted out by Campbell Newman’s chief media adviser, Lee Anderson, who demanded an apology from Senator Waters.

As far as improving the government’s front line services, it appears the Newman Government has been making it up as it goes along.

Queensland’s Auditor-General Andrew Greaves has found that most public service departments have no way of measuring exactly what the government says it is delivering on.

“There service standards reported by the majority of departments and services areas fall well short of being direct measures of efficiency or the effectiveness of the services they deliver,” he wrote in a report.

The report went on to say, “Not knowing whether major government services are cost-efficient hampers effective decision making particularly whether there are any significant savings to be made from outsourcing of services.”

In response, Campbell Newman made a nonsensical statement.

Despite all the controversy that has surrounded the Newman Government over its two year tenure, Auditor-General Andrew Greaves has remained impartial and devoid of influence.

Despite the government’s claims that it was getting a building for free and saving $60 million a year, Greaves found that the new tower would cost Queenslanders $1.192 billion in rent over a guaranteed contract of fifteen years.

Greaves found that “a business case was not developed” before the deal was struck with Cbus property.

It was a stroke of genius, save the train station from ourselves.

Campbell Newman wasn’t interested in talking about sand, gravel, the judiciary or the Auditor-General this week. Instead his media team launched a classic distraction in which Newman was hailed as the “engineering Premier”, saving a train station.

Seemingly, no other engineer could have possibly solve the problem of demolishing the Dutton Park train station. It was Newman who ordered the entry and exit ramps on the $5 billion BaT tunnel (short for bus and train tunnel) to be increased in gradient so as to save the station.

The major players were there. Appearing with Newman, local MP Rob Cavallucci, Transport Minister Scott Emerson and Brisbane Mayor Graham Quirk all poured over a map of the area like generals preparing to invade a foreign country.

Brisbane has had a bad history of public spending on tunnels. In 2013, due to a lack of patronage, the recently completed Clem7 tunnel was sold to Queensland Motorways for $618 million after $3 billion was spent on its construction. 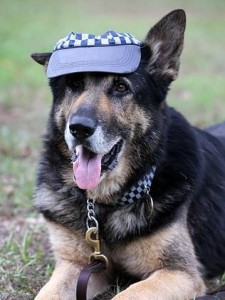 Qld’s most famous police dog, Bosun has passed away, aged 9.

Queensland’s most famous police dog, Bosun, has passed away at age nine.

Bosun became famous in 2011 for chasing down two offenders in the shooting of Detective Senior Constable Damian Leeding during a hold-up.

At the trial, Gold Coast Police Dog Squad Senior-Constable Wayne Algie explained how Bosun had tracked one of the offenders in “pitch-black” bushland before apprehending him by the armpit.

Donna Lee McAvoy was sentenced to a minimum of fifteen years for the murder while accomplice, Benjamin Ernest Power, received nine years for manslaughter.

Bosun also made news in 2012 when he was outnumbered by two dogs in an arrest of a man for drug related crimes. Bosun was bitten savagely on the leg but later recovered.

Could it be Porky McBarrel the Premier is talking to about spending in his electorate of Ashgrove?

Newman has pledged $2.5 million to turn “Walkabout Creek” in his electorate into the eco-tourism blockbuster, “Greenworld”.

Front and centre: @theqldpremier takes tips from from another man in a suit. #QldPol @tennewsqld pic.twitter.com/WIR8g9wxqc