The liberties of George Brandis by @awelder 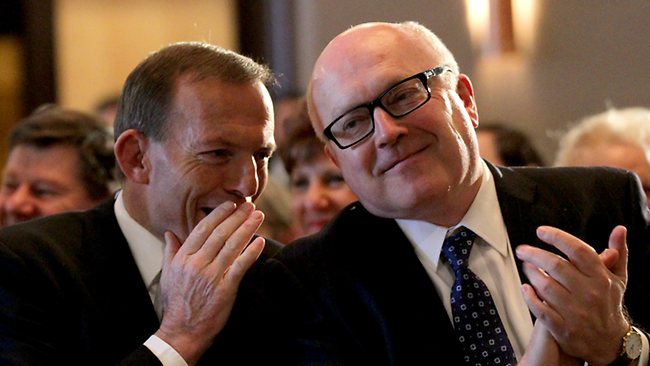 Tony Abbott and George Brandis before his address on freedom of speech. Picture: Sam Mooy Source: The Australian

Margo: After the recent George ‘free speech’ Brandis speech  I asked (begged) @awelder to write me a piece on the civil liberties credentials of the man who would be Attorney General under an Abbott Government. This is Andrew’s first piece for @NoFibs. Thank you.

There is a story of a Queensland shearing team and a cook who was especially sensitive to their rough-and-ready ways. One day the shearers came for their meal break to find the cook refusing to serve them. Someone was sent in to find out the problem: the peacemaker returned to the shearers and asked “All right, which one of you bastards called the cook a bastard?”. After a pause one of the shearers replied: “Never mind that – who called that bastard a cook?”.

When George Brandis calls himself a defender of our liberties, and of media freedoms in particular, why is he taken at face value? What makes you think that if Brandis was confronted with a threat to civil liberties, he’d do anything but cave in and insist it was for our own good?

George Brandis was apparently big on civil liberties as a University of Queensland student, and studied their roots in philosophy and law at Oxford, as a Commonwealth (not a Rhodes, as so often misreported) Scholar. He became a barrister specialising in trade practices law, a field dedicated to defence against unfair market practices – essential freedoms play a role, kind of, but they involve the relationship between government and corporations rather than with or among individuals. Very little of his 15 years as a barrister was spent at the coalface of civil liberties, asserting the rights of clients from low socio-economic background against crusty police and snippy magistrates.

Before becoming a barrister, Brandis co-edited a book on Liberal politics called Liberals face the future. The book followed the defeat of the Fraser government federally, the defeat of longterm Liberal governments in states like Victoria, and the removal of the Liberals from Coalition government in Queensland. Three chapters are co-written by Brandis: ‘Liberal values’, ‘The Liberal Party: towards government’, and ‘Policy choices for Liberals’. All expound liberal philosophy and try to balance it against conservatism and libertarianism, but all shy away from actually showing what liberal policy might look like for Australians of that time.

In 2000 Brandis became a Senator, replacing Warwick Parer, who was one of John Howard’s closest friends. In his maiden speech Brandis quoted from Isaiah Berlin, Shakespeare, J S Mill and Adam Smith, and lumped ‘political correctness’ in with tyrannies. All the big decisions seem to have been taken, and Brandis would have our roles as citizens and legislators to provide the aspic in which they are to be preserved. Liberties are to be inherited and defended, not advanced or reinvented, nor extended to those excluded from the birthright in the past.

Most of Brandis’ parliamentary career has taken place since 2001, when the attacks on the US on 11 September that year ushered in a series of challenges to the execution of civil liberties under law. His thinking on the matter appears to have been piecemeal and working on trade-offs rather than on guiding principles on the execution of justice in 21st century Australia. Brandis claimed the Anti-Terrorism Bill (No. 2) 2005 represented:

a very conscientious attempt within the government to reconcile those two conflicting values: the real—not the imaginary or fanciful—threat of domestic terrorist violence in Australia and the fact that as a liberal democracy we fight with one hand tied behind our backs.

The lesson from the Second World War, and indeed the end of the Cold War, is that social/liberal democracies are more resilient than tyrannies – even those beset, to whatever degree, by political correctness. It is telling that Brandis relies upon the following quote to an extent that would have made the blood of his Joh-era Queensland youth run cold:

The best evidence, I think, was from Deputy Commissioner Lawler … of the Australian Federal Police, who said … words to this effect: ‘Look, we do not mind how many safeguards there are as long as the operational capability of the Federal Police is not interfered with.’

In 1997, UK author Andrew Langley had written a book called 100 Greatest Tyrants, which not only included Stalin, Hitler and the usual suspects but also Robert Menzies (for his attempts to ban the Communist Party). Somehow a copy found its way to the library at Good Shepherd Catholic College, Mount Isa. There is a case to be made that Menzies did not belong in such a book, and Senator Brandis could have made it – instead, in 2006 he called for the book to be banned. The school’s principal struck the right note both in condemning the book and insisting that it remain to serve a useful debate on civil liberties.

Brandis was briefly a minister toward the end of the Howard government. He has been Shadow Attorney General since Labor took office in 2007, outlasting two leaders, a Prime Minister and two Attorneys-General, but has contributed little to the debate on our legal system over that time. He will not countenance a Bill of Rights, considering it “a lawyer’s picnic” as though, for an old trade practices lawyer, that was a bad thing. A genuine lawyer’s picnic – the patchy record of ASIC in prosecuting breaches of corporate law – receives the odd press release from Brandis but no thoroughgoing examination or reversion to first principles.

Brandis referred the Same-Sex Relationships (Equal Treatment in Commonwealth Laws – Superannuation) Bill 2008 to a Senate committee for review, a classic hedge manoeuvre. Had Tony Abbott been leader then, the Coalition would have opposed that bill (to allow same-sex partners the same rights over superannuation that heterosexual couples have), and Brandis wouldn’t have stood up to him, just as he didn’t in the recent same-sex marriage debate. The principle of conferring Our Rights And Freedoms upon those denied them in the past is not as strong in Brandis as his professed intellectual heritage might suggest.

Brandis was not among the courageous Liberal MPs and Senators who opposed John Howard’s mandatory detention policies. Legal debates over the John Yoo torture memo or the extraordinary legal predicaments in which Australian citizens Mamdouh Habib and David Hicks found themselves appear to have no impact on his thinking on Australian law. He has revelled in playing Javert to Craig Thomson’s Valjean, but recent developments in that matter may explain his recent silence.

On plain-packaging of cigarettes, there was a strong case to be made both for supporting the government’s initiative and for opposing it in the name of commercial freedom: Brandis did neither, splashing around in the shallows of that debate while others led it. His claim that latter-day Australian Greens trace their heritage to Nazi movements was silly, and his claim that Prime Minister Gillard lacks empathy for others because she has no children was simply self-defeating. His attempts to truckle to journalists over media regulation are contemptible.

The implications for liberty and privacy arising from new communications technologies have passed Brandis by (not least in terms of banning books). Kant, Burke and other thinkers could scarcely have imagined these technologies and their impacts on our lives. It is a genuine indictment on our political system generally, and on Brandis personally, that our rights and freedoms in the digital age have been examined more extensively by Bernard Keane of Crikey than by the Shadow Attorney General.

Brandis’ abandonment of the big issues in our legal system is part of a wider problem for the Coalition. For the first two years of their current term in opposition they genuinely respected the people’s verdict and started casting about for a post-Howard future for the Liberals, a lot more tentatively than Brandis and his co-contributors did post-Fraser in 1984.

Since 2009, when Tony Abbott became leader, the Coalition has become convinced against all evidence that to promise a return to Howard is to make it so. Like other Liberals, Brandis has learned nothing and forgotten nothing from his term in government; opportunities to learn, reflect and help shape a post-Howard future have passed him by. Other Liberals might be forgiven for not reconsidering what it means to be a Liberal post-Howard – what to carry forward from Howard, what to leave behind – but not Brandis.

George Brandis might be regarded as someone who insinuates himself with those who genuinely believe in principles of free speech in order to better betray them. This would be an easy call to make, but unfair: it makes him out to be a more one-dimensional than he is. The reality, I believe, is more complex and sadder: he genuinely fancies himself as a free speech advocate in the same way that a paunchy middle-aged man might confuse himself with the blade of his younger days. As attractive young women shrink before his advances, or laugh, he remains convinced that he’s Still Got It.

There are limits to our obligation to humour Brandis in his self-delusion. There are no limits, it would seem, to his jowl-wobbling outrage at any attempt to impugn a reputation which remains intangible despite having been asserted, and accepted, so often.

Margo Kingston:  The Liberal Party’s war on freedoms: My reply to Brandis

Richard Ackland: Brandis has huge job being seen as a freedom fighter

Jonathan Holmes: Correcting the record on ‘The Freedom Wars’