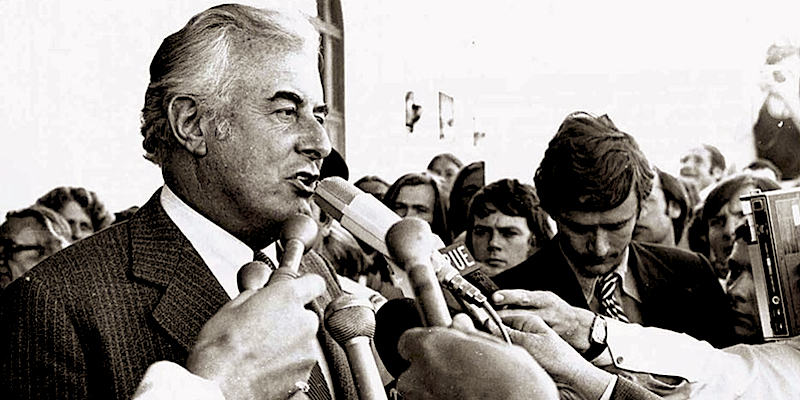 Gough Whitlam got conservatives in Australia on the move in the late 1960s and they have never stopped running.

IT took me almost half my lifetime to work out what I owe Gough Whitlam.

The second son of a NSW grazier and a nurse from Sydney’s north shore who gave up her career to have kids, I was a five-year-old when Whitlam was dismissed. At twelve I was given a fearful lesson on what would happen if the Australian Labor Party ever got back into power, which consisted of a darkly-uttered statement: They’ll spend all the money the country has, just like they did under Gough.

By then my family was a victim of the D-word (‘divorce’), a fate no other family seemed prone to, one that was uttered behind cupped hands. Mum still wore her wedding ring and kept her married name. It makes things easier, she said.

At 18, I saw Gough and Margaret Whitlam enter a lecture hall at Sydney University. Not making for the stage, that practical pair equipped with a rug for both laps and a thermos, but for whichever spare seats they could find. A ripple of recognition ran through the capacity crowd, which turned into an electric standing ovation. Both acknowledged the accolade, and proceeded to dampen our enthusiasm with a few waves of their long arms, because they didn’t want to distract proceedings.

They seemed harmless, the instantly recognisable yet strangely anonymous Whitlams, portrayed as villains on both sides of my city-country family, so I started asking questions.

My parents didn’t vote for Gough, it just wasn’t done on the land, but Mum did reveal when asked about life during the Whitlam era that when it came to the survey on changing Australia’s national anthem from ‘God Save the Queen’ to ‘Advance Australia Fair’, two votes — hers and my father’s — were registered in the affirmative in our region. I turned this seed of progressive thinking in my family into a world of possibilities.

Soon after, I left Australia for six years. A political and economic dunce up to that point, the experience of living in another economy taught me everything that being a high achiever at private school never could.

In post-Thatcher Britain all the elements of an economic rationalist society were at work. Working alongside people who had families to feed for the same meagre weekly return as I managed, I started to realise how stacked the deck was. The cost of living was extortionate, the financial burden on the average family of a day trip to the coast so prohibitive that many I knew just stayed at home. What if that happened in Australia? I thought. A trip to the beach only for the very wealthy? Imagine how Australians would complain!

Returning home for breaks, I suddenly saw my country for the vibrant place it was, full of life, light and colour; whereas England was an economic web, waiting to trip you up if you didn’t feed the machine like you had to feed the electricity meter with pound coins. I decided to come home and embrace the land I was born in before it changed beyond recognition, and I only just got back before the damage really started. Ever since coming home I have despaired at the way Australia has bought the economic line of leaders intent on emulating Thatcher and her P-word (‘privatisation’) here.

Today, I feel like I have lost a family member. All day the media has covered reaction and response, from prime ministers past to an indulgent set of speeches in the House of Representatives, and I have tried to work out why.

Walking the dogs after work it struck me how distracted we are by the loss of Gough, because he has become ingrained in our nation’s consciousness. For progressives, he’s held in our hearts, but his actions are possibly most ingrained in the hearts and minds of Australian conservatives, those who live under the great Australian misnomer of ‘Liberal’, because Gough came to embody their greatest fear — that people are infinitely more important than economies. 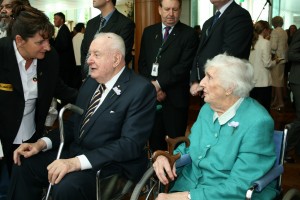 We live in a world where a tsunami created by an earthquake can occur in front of our very eyes, live on television, and yet the commentary, response and analysis is not about the people dying on a screen in our living room, it is about whether the economy will survive, forget about the people. I feel this same lack of compassion in the Ebola and Iraq coverage and the lack of action it inspires in Australians.

Gough didn’t think that way, and he didn’t act that way — he simply gave us what we needed.

When my family found peace away from the expectations of ‘happy marriage’ for the childrens’ sake, and didn’t have to find someone at fault and someone to play the victim, that was Whitlam’s legacy.

When my mother needed to work and still had nursing up her sleeve, started at a local hospital as a casual and ended up being night supervisor for a decade, her self-determined life as a single mother was Whitlam’s legacy.

My presence in that lecture hall, a student at an Australian university, free- of-charge, that was Whitlam’s legacy. My right to vote that same year, my eighteenth, was probably far more significant, although I didn’t understand it at the time.

I hope he felt the greatest compassion for himself after the Dismissal. When I consider how he never seemed bitter, I feel a strong life lesson about failure, because even in the midst of his ‘well may we say…’ speech, a wry smile that always reminded me of Dame Edna crept up his mouth and projected his profile out to the crowd. Bitterness could have taken him away much sooner after such a diminishing moment, but he lived almost forty more years after that speech — my lifetime.

Gough Whitlam got conservatives in Australia on the move in the late 1960s and they have never stopped running, afraid of debt and deficit and spending money on people or places where it’s needed, as though money is a thing of power that could do something positive while stashed away in a nation’s coffers. For a man who was so ingloriously dismissed, I loved the way Gough dismissed economically fearful Australians with such panache, and held to account those who think it’s okay to make huge money by doing nothing.

Instead of wishing he’d had more time, or wishing he’d not been dumped, I want to see the whole thing in reverse, just like Malcolm Fraser does. Australian conservatives have simply been reactionary, because progressive thinking has been in Australia’s driving seat ever since Menzies. It took losing Gough to see it.