By Tony ‘The Geek’ Yegles

I was fascinated by the media’s framing of the NDIS debate this week. Within 48 hours it moved from reporting a naked tax grab by the Prime Minister, to a worthy initiative when Mr Abbott put the national interest ahead of his political interest. Update below May 15 2014

November 29 2012 – NDIS Bill is introduced in Parliament with Coalition absent.

Tony Abbott: “We have supported the NDIS every step of the way.” NDIS Bill Introduction 29/11/2012 with only 6 LNP MPs present. 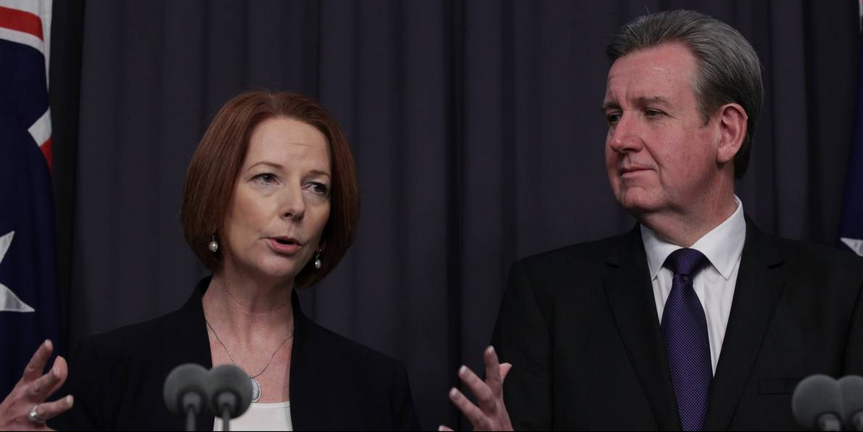 In the lead up to the NDIS Medicare Levy announcement, Joe Hockey and News Limited were the fiercest critics.

Hockey “If the economy is under-performing, you don’t tax it to increase performance. You never tax and regulate your way to prosperity, this is something the Labor Party just doesn’t get. You don’t improve economic growth by increasing taxes.”

Peter Anderson, the chief executive of the Australian Chamber of Commerce and Industry (ACCI) ‘We don’t necessarily need the gilt-edged scheme if we actually can’t afford it,”

Increasing income tax the right choice for a sustainable NDIS 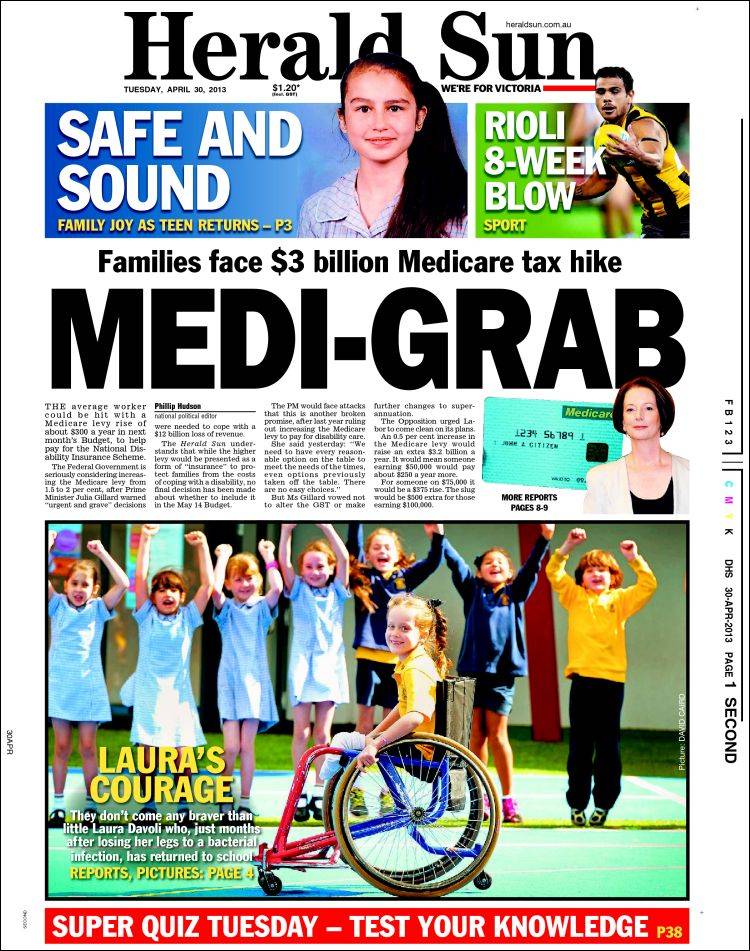 Wednesday May 1: The usual suspects take up their pre-determined ideological positions. 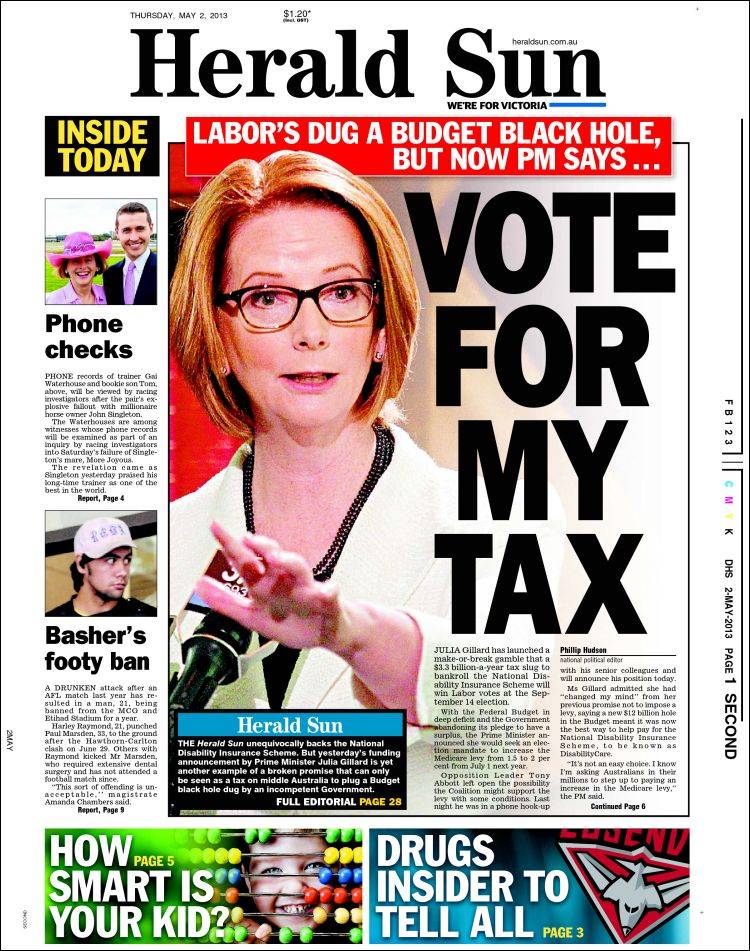 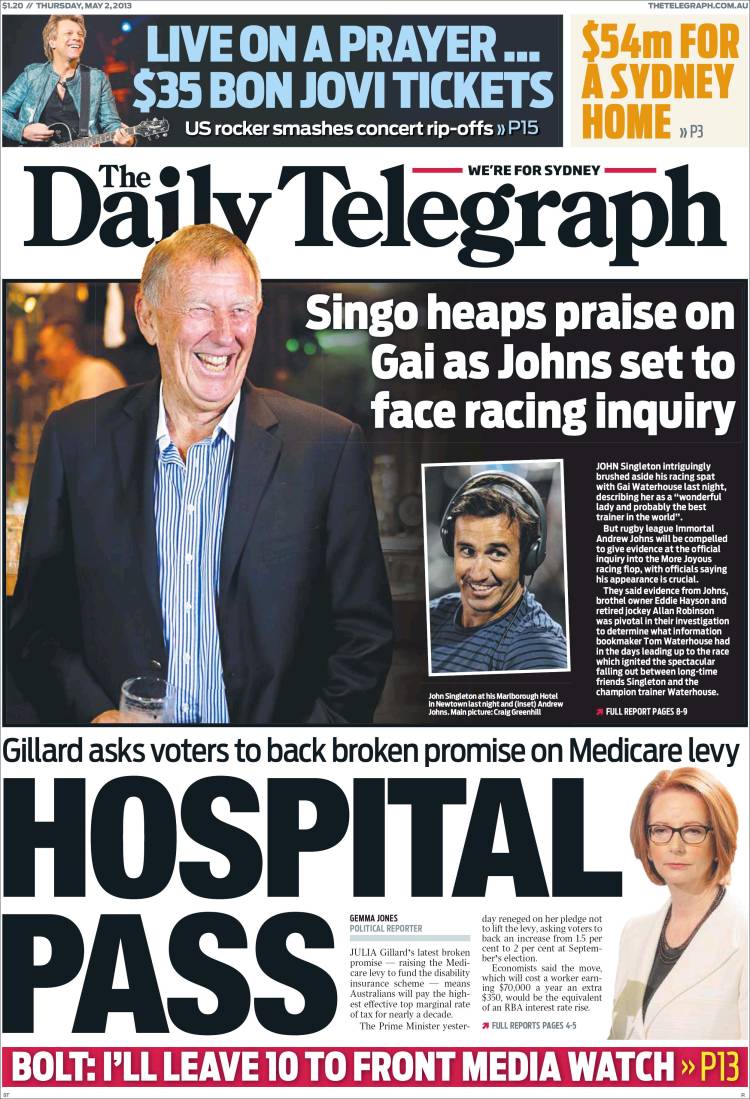 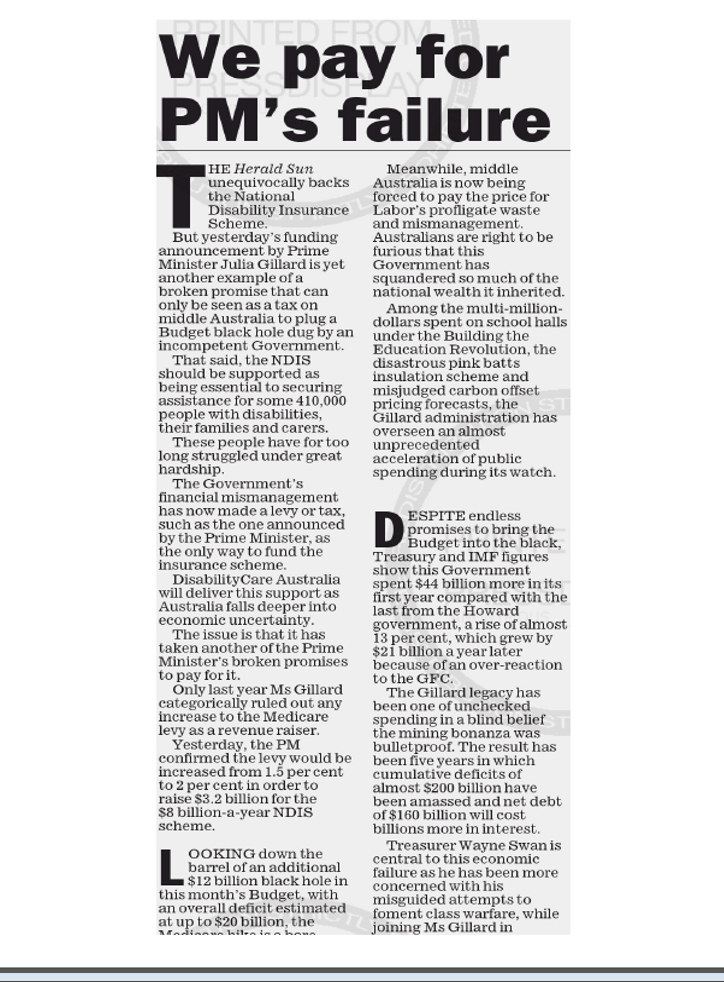 Steve Wojtkiw, chief economist for the Victorian Employers Chamber of Commerce and Industry (VECCI): This is not the time to impose new taxes.

TONY ABBOTT: If you’ve only got half the funding, it stands to reason that you’re only gonna get half the scheme.

The usual suspects are forced to change their position to remain in lockstep with Mr Abbott.

News Limited’s Gemma Jones: Politics is put aside in bid to support decency over the National Disability Insurance Scheme 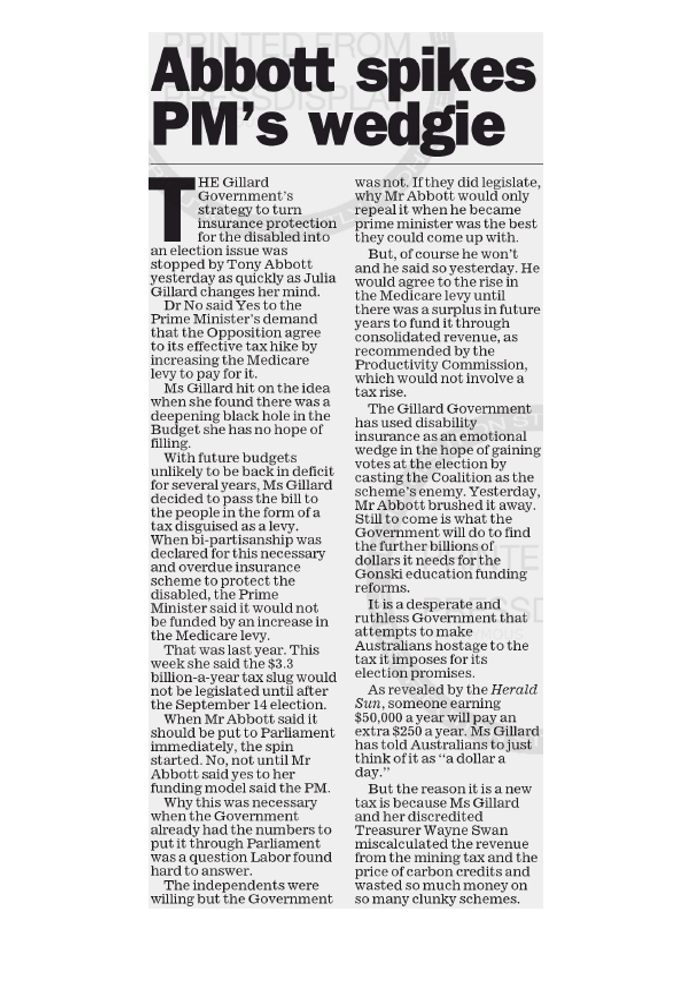 Who could forget the gilt-edged Millionaire CEOs:

Myer has warned the proposed increase to the Medicare levy will hurt sales at its stores, since it will affect its direct customer base.

Presumably the levy hurts more than modernity and online sales? What about the tax free threshold from $18,000 to $6,000, the overall lower taxes since 2007, low interest rates and a massive retail stimpack boost at the height of the GFC? Bernie Brookes and Gerry Harvey must live in the same gilt-edged millionaire’s bubble.

How do you return a business to its former glory? Give it to Bernie Brookes.

Business Council Australia and Myer forced to defend their NDIS stance. Both say they do support the scheme.

Horse race journalism is the laziest journalism there is. It is opinion based and anyone and everyone  has one of those. Insiders called for PM’s political death ever since 2010.
So what to do when the merits of  a policy has wide popular support and support from both sides of politics? What if it transcends and breaks out from the lazy framing of left/right and big bad guvmint?

Easy. Flip the reality on its head and see what comes out.

Michelle Grattan: Political reality overtook some cynical power play from both sides, but especially by the PM  (How many times has Grattan written this exact same story?)

Just a reminder that for the Coalition, NDIS was always in the category of “aspirational” meaning the “never never”. There were no funds allocated, no policy work, no effort put into NDIS. None. Mr Abbott had been on a weeklong charity bike ride, while Hockey has been bagging every Government policy and its costings without providing any of his own.

It is the PM that has had a change of heart on the levy early this week, not Abbott , not Hockey. By Tuesday it became a policy reality.

The coalition had to do all the catch up from bad guvmint, great big new tax to moderate increase and a good start. The same goes for the MSM who lazily applied the same LNP political framing they’ve applied throughout. It was the policy substance that took them by surprise. Suddenly they had to come up with new explanations outside of who lost and who won. Explaining the values of a policy.

Could it be that just maybe the aim was to ensure that important national policy was secured for the future, in the spirit of medicare and superannuation? It took the old 1 – 2 trick to lure out the usual suspects from their opposition and then force them to confront the substance of the policy, the values.

Policy trumping politics? I have never heard that said from an insider. Keating said good policy is good politics.

Margo Kingston called it early and called it right: I feel the disability levy will transcend standard political analysis and game-playing.

Saturday May 4 – Victoria signs onto the NDIS 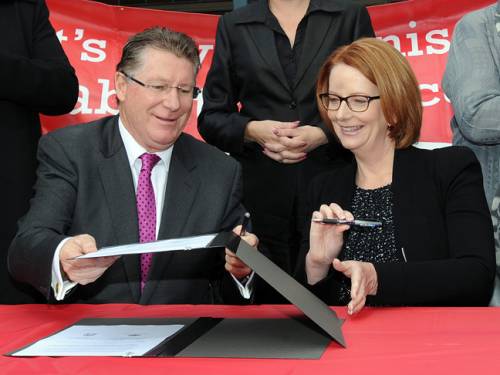 To sum up this historic week, mumbletwits put it best in describing the predicament for the usual suspects:

If u find @chriskkenny's tweets on NDIS levy confusing, it's because the Lib party line hasn't been worked out yet. Patience please.

Amazing what can happen in 24 hours, 48 hours or in a week in politics. From big bad guvmint and great big new tax to political wedging to above politics to national interest.

Let the record show, who showed up for word today and who did not.