‘The night I got politically engaged’: How @TomAnderson62 found himself live tweeting #Indivotes 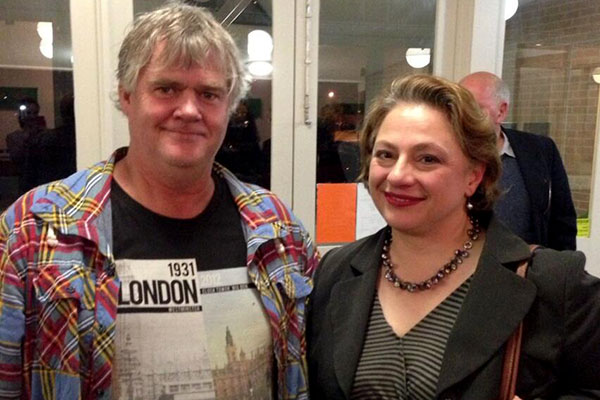 I have always been fascinated with politics, especially elections. I guess that started when I worked as a ‘Polling Clerk’ at 15 at a booth at Mont Park in Macleod back in about 1977. How did a 15 year old get a job that had a prerequisite of ‘must be enrolled on electoral roll?.

Back then the Deputy Returning Officer of a polling booth got to appoint his own staff. My father was that person. His assistant was my oldest sister and the other seven staff were his sister, three brothers, a brother in law, a close family friend and me. So for me an election day was just a family day out.

My father always told me that every Australian had a right to vote, even those who were “a few kangaroos loose in the top paddock”, and it was our job to ensure we did everything possible to make sure their right to vote was upheld.

I continued working at polling booths at every state and federal election up until the mid 2000s, so elections have always been in my blood. I used to love counting the votes, doing a check of preference allocations and rushing home to compare our results with the actual result.

I never got involved in an election campaign. I also never received any guidance from my parents as to how to vote – they told me to exercise my right to vote by making up my own mind from all the information I had available to me. I was never to discuss how I voted and was chastised whenever I asked my parents how they had voted. I was brought up in the era of neither politics or religion were discussed at the dinner table or at social gatherings,

I lived in several Melbourne suburbs until 2008, all in marginal electorates. Until moving to Wodonga in late 2008, I had always felt my vote had counted and the way I exercised my vote could influence the result of an election.

When I moved to Wodonga I was dismayed to learn I was in a safe electorate and that my vote did not matter any more. I  I voted for Sophie Mirabella and Bill Tilley respectively in the two elections held since my move.

Before the last election I shared Sophie Mirabella’s belief that ‘Civil Unions’ were enough for me as a gay man. I am now firmly of the belief that no relationship between 2 people should be seen as anything other than equal in the eyes of the law and society and I wish good luck to anyone brave enough to enter into such a relationship.

In May I became aware of a ‘Voice for Indi’ grass roots campaign to make Indi a marginal seat so voters would no longer be taken for granted and would be listened to. 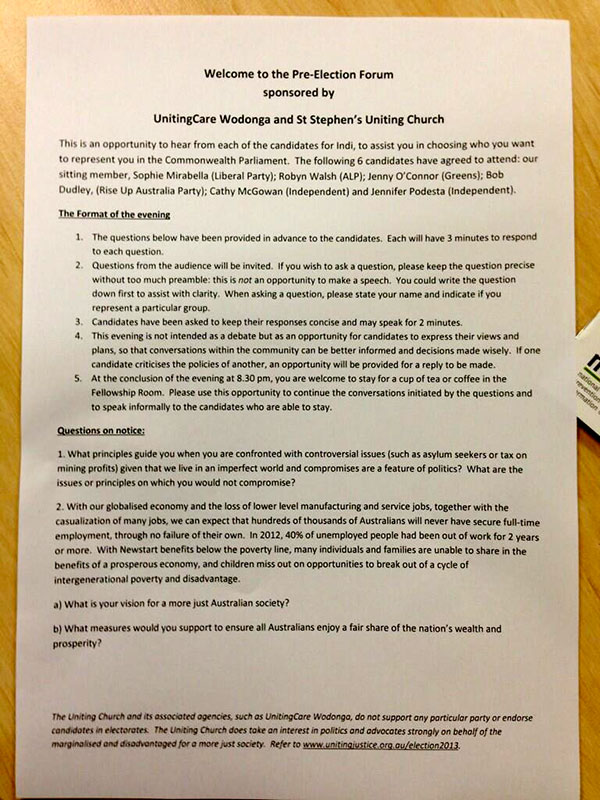 I first heard Cathy McGowan speak on the local ABC radio station. A few weeks ago I read about her campaign through Twitter and also read in the Border Mail about her campaign launch at the Cube in Wodonga that attracted a crowd of 400 people.

In Wodonga anyone who can attract a crowd of 400 people must being doing something right. So I started taking more notice of her and her campaign. First of all what impressed me was her use of social media to engage and spread her ideas. Anyone willing to engage and talk to me on social media these days will spike my interest even more.

I also noticed that #Indivotes was starting to garner attention from bloggers and people outside of Indi. and I was drawn to her campaign even more, like a moth to a flame so to speak.

This came to a head yesterday when the Border Mail reported a candidates forum to be hosted jointly by The Border Mail and ABC Goulburn Murray on 26 August at the Cube in Wodonga. So I tweeted using #IndiVotes that I would be attending.

I received a tweet back from Margo Kingston advising of a candidates forum last night and asking if I would be attending and if I could live tweet the event. I replied that if it was close to me so I might go along, but I couldn’t find anything about it in local media. I received information via Twitter that the forum was to be held at St Stephen’s in Beechworth Road Wodonga at 7pm and because it close to where I live there were no impediments to me attending.

I’m a ‘doubting Thomas’ by nature, and I needed to confirm for myself that said event was going to actually happen. I drove down Beechworth Road after work and saw a parking space outside Cathy McGowan’s campaign office, so I dropped in to confirm the forum. The first person I met was Cathy McGowan, who asked who I was and what issues were important to me are. She asked me questions and she answered mine. 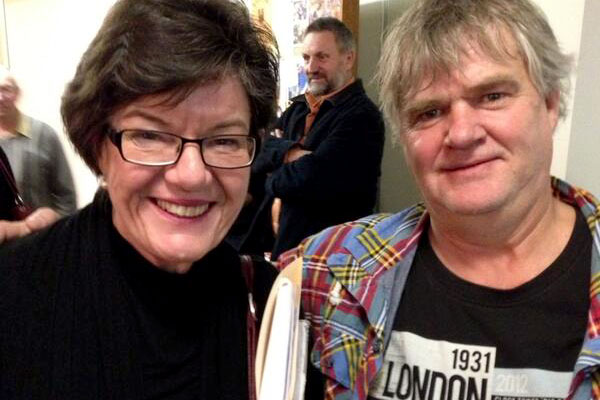 It was ‘love at first sight’ so to speak. In 20 minutes she convinced me that her campaign was something I wanted to support. I said I would give her $200 to support her campaign, but that it did not come with my vote attached. It was to be used to be make a contest of this election but she still had a lot of work to do before I would also commit my vote to her.

I said I would listen to what she had to say and judge her performance over the coming weeks and then decide how I would vote, but that I would be willing to work as a scrutineer on election night on her behalf.

I have never live tweeted anything before. To live tweet an event you must be capable of summarising and typing on a mobile device what had been said whilst at the same time listening to what is being said and trying to make sure you don’t miss anything important.

The candidates were invited to address 2 questions on notice.

a) What is your vision for a more joint Australian Society?

b) What measures would you support to ensure all Australians enjoy a fair share of the nation’s wealth and prosperity?

You can see my tweets below and under the #Indivotes hasthtag.

The candidates then took questions from the floor on self funded retirees, climate change, economy, debt and other topics, but by this stage I was distracted. I was trying to ask a question myself, because I had noticed, where were the questions about Indi?

Where were the questions that we should have been asking? This was a local forum for candidates for the electorate of Indi.

These were the questions I wish I could have asked, but the moderator kept ignoring my upward pumping hand.

In the coming days I will endeavor to get each of the major candidates, Sophie, Cathy, Jennifer, Robyn and Jenny to answer on my behalf.

I will finish with my observations and form guide garnered from performance in the forum and post-forum chats. 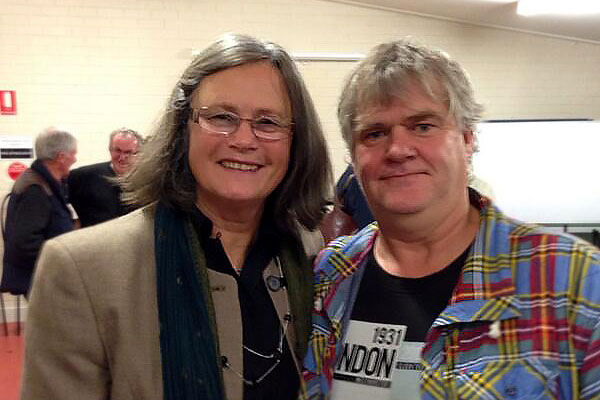 Robyn Walsh and and Tom Anderson

Robyn Walsh (ALP) struck me as ‘Please let this be over, I can’t win but ALP needed someone to run’. She had a total ALP line on all issues and read from the talking points issued by party very well but lacked any individuality. 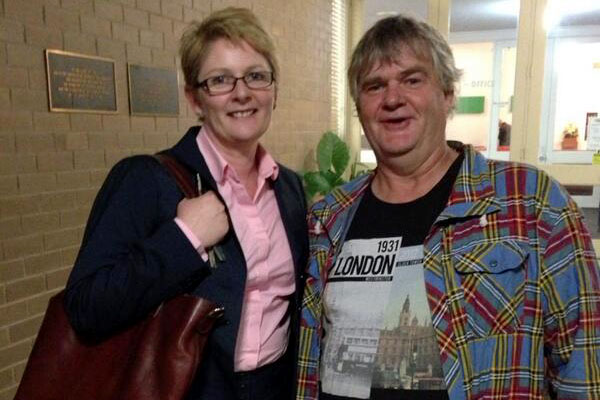 Cathy McGowan was a little disappointing at times. She gave up the spotlight to Sophie when a question from the floor was directed at her, and at times congratulated Sophie on past achievements such as water conservation grant for a local school. She made the mistake of resting her head on her elbow as others were speaking, giving the impression that she was bored, but as the night progressed became stronger and more assertive. Of all the candidates she is the one who can improve the most and I look forward to future forums.

Sophie Mirabella was the consummate professional of the night. She was allowed to dominate and take questions directed to other candidates. She articulated and dominated the message without slip up or any of the bitchiness associated with her persona.

I look forward to contacting all major candidates and gaining answers to the questions that I believe need to be addressed, and to attending future candidate forums.

Tonight I became involved in local grass roots politics. I got engaged in it and like a child given candy and riding high on a sugar rush, I WANT MORE!!!

Palmer United up now. #indivotes Clive is doing it for the people of Australia

Palmer United Party candidate can offer is his life experience

Sophie I am a conviction politician. Give a voice for Indi. Governments should do no harm #indivotes

Sophie #indivotes freedom of opportunity, freedom to live fulfilling lives. Need to compromise. Work within party. I will stand up when need

Look after the least of our brethren – Cathy McGowan #indivotes

Sophie speaks at #indivotes "no level of unemployment or poverty is acceptable " need to create opportunity. Best form of welfare is a job

Profit is not a dirty word. It is the enabler of healthily thriving community. Allows for corporate philanthropy says Sophie #indivotes

Cathy on Climate Change. "Let us all agree. Innovate & invent. Work together and just do it" #indivotes

Stop the political football. Stop everything being politicized. Cathy on refugees at #indivotes