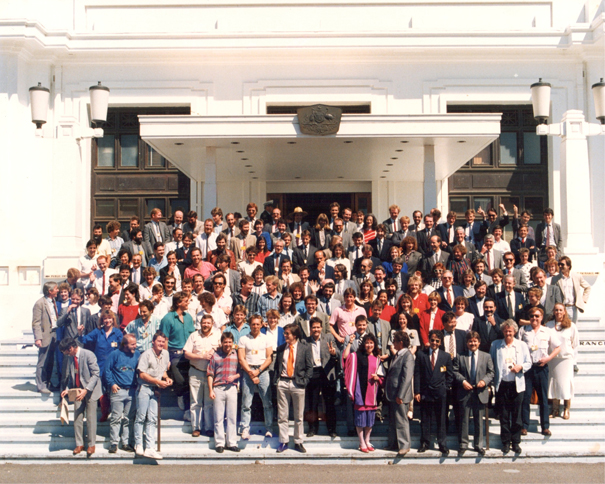 The PG at old parliament house before the big move. Source: http://pressgalleryreunion.com.au/

The Canberra Press Gallery is in a reforming state of mind, and to my surprise I’m making a contribution, thanks to Twitter. And thanks to the Press Gallery Committee President @David_Speers, Tweeps can have an input too.

The PGC decides who joins the club. In the old days we knew who belonged, journos chosen by their media employers. So there are no criteria for entry, no standard form, no process apart from emailing the president and obtaining a signature for Parliament officials to issue a press gallery pass. We all knew who belonged and who didn’t.

Times are changing. New media is moving in, old media is contracting, and the very definition of ‘journalism’ is contested. The increasing direct involvement of citizens in public political discourse is intensifying demands for transparency in the media, which has somehow kept its internal workings secret at the same time as it successfully demanded ever increasing transparency in the political institutions it interrogated.

The casual, oral tradition of volunteer working members of the Press Gallery exercising what amounts to secretly exercised, discretionary power is under serious pressure, exemplified its recent refusal of membership to @callumdav. His account in @independentaus, story triggered Tweep questions on how the PGC worked and where they could access a list of PG members. Although I was a member for many years I didn’t have all the answers, and @walter_bagehot kindly briefed us.

I was surprised that the press gallery membership list, readily in Parliament House, was not a public document, and tweeted David for a a copy for  publication. Having received no reply, I lodged an FOI with the Department of Parliamentary Liaison, which has the list because of its duty to maintain the security pass database.

As a result, PGC secretary @Jamesmassola had a go at me by tweet: ‘FOI seems like a sledgehammer to crack a nut.’ David then asked for my email address. Here is our correspondence.

I have checked with the immediate past presidents of the press gallery, Karen Middleton and Phil Hudson and they both confirm the gallery list has not been made available for publication in the past.

It is made available to people and organisations who wish to use it for professional purposes – for example, political offices and PR agencies.

As you know, the gallery is made up of many journalists, photographers, producers, crew and administration staff.  Some may not be comfortable with their details being made publicly available.

OK. I don’t want details, just names and employing organisation. I will proceed with FOI for those.

I understand from a background conversation with a PG member that there may have been an unstated reason for turning down IA. I hope so, as I feel one of your reasons does not stack up. The unstated reason, as I was told it, does stack up, and should be made explicit as a condition of membership.

David, I feel the PGC will have to publish criteria for admission sooner rather than later, given the changing face of the media. The criteria you mention in your reasons for excluding Callum Davidson are inadequate. For example, I would have expected that the applicant’s adherence to a code of ethics, and the employer’s respect for the copyright of others, would be necessary criterion.

I don’t think it is tenable for the PGC to continue to operate on unwritten, variable ‘guidelines’ given the power it wields over the composition of the press gallery, which enjoys considerable privileges in reporting federal politics. As demand for membership from new media grows, the PCG will be required to demonstrate consistency in its decisions, and that it has applied written criteria for entry.

I also feel that not publishing the members and employing organisations of the gallery cannot be justified in this era of transparency, especially since the PG demands transparency from those it reports.

I would like to post your reply and my response as a comment to the piece on the press gallery recently published by @NoFibs. OK with you?

Happy for you to publish the earlier email and this one too.

You raise some good points about the changing media landscape.  The Gallery Committee is trying to deal with this as best we can.  Suggestions are very welcome.

I can tell you a domain name has already been registered and we intend to create a Press Gallery website.

In regards to publishing the names of Gallery members, this is something we are also considering.  But we believe it’s only fair to consult Gallery members before a final decision.

I am over the moon with delight at David’s response. He has invited discussion with citizens on the way forward, and I hope Tweeps of good will contribute.

@nikt50 needed no invitation. Last night he tweeted a link to a 2009 comparative analysis of Western press galleries, by former PGC president @KarenMMiddleton. She  recommended a PG website and that the PG consider funding a secretariat to, among other things, ‘guard the principles of journalistic independence and interact more effectively with the public’.

I believe that a criterion for membership should be that the employer will not publish the work of a PG colleague without credit. Social media is often guilty of publishing photojournalist’s work without attribution, and sometimes of publishing journo’s stories in full in breach of their copyright. Press Gallery membership criteria could help clean this up.

I am also not averse to a requirement that the applicant has previously worked as a journalist because, among other things, ethical questions are acute in reporting politics.

I strongly disagree with Tweeps’ suggestions that PGC powers be transferred to the Speaker and Senate President or to a government department. Journos can and should do this work for themselves.

Now I’ll get radical. I feel that journalists, not media employers, are the true representatives of the 4th Estate, because, like judges, members of the government and parliamentarians, they are meant to contribute to the health of democracy. As the recent Senate Inquiry into media reform proved, media employers in the private sector believe their sole objective is to maximise profits. Journalists, not employers, have personal responsibility for complying with the ethical  codes of their ‘profession’. Thus it has always been journalists, not their employers, who have pushed hard for ethical accountability through external bodies like the Press Council and internal mechanisms like charters of editorial independence and employer commitments to ethical practice.

The Press Gallery Committee has, perhaps by accident, real power, which is a highly unusual state of affairs for journalists. They thus have the opportunity, at a time when reform of the PGC is necessary, to shape it in a way which empowers ethical journalism in traditional and new media, and thus makes the case for the special privileges granted to journalists’, including exemption from privacy laws and protection from disclosing sources, to continue and be strengthened.

The Media Alliance this week announced a new membership scheme under which social media can sign up to its code of ethics. This innovation would allow the PGC to include as a requirement for membership that applicants have committed themselves to and will comply with a credible code of journalistic ethics, whether or not they chose to be an Alliance member.

In my dreams the PGC would consider ethical complaints, perhaps via volunteer elders of journalism who have retired. The object would not be to punish, or even to adjudicate, but to publish considered opinions on ethical issues as they arise in practice for the purpose of informing and enriching ethical debate.

Ideally the issue of ethical journalism and its promotion will be addressed for all journalists one day. I feel that compliance with an ethical code is the main signifier of a journalist, and must be strengthened as part of our effort to save the profession/art/craft from extinction. I outlined my ideas in this regard many years ago in a speech to an anti-corruption conference.

That’s just a dream, however in its review the PGC might like to consider what steps it could take in the world of press gallery journalism to put ethics on the table.

Over to you. Good luck, David. I know you and your fellow office bearers are volunteers who work long hours and have little time to spare. Perhaps a few press gallery elders, past or present, might put together a discussion paper? Press Council chief Julian Disney might be willing to help. His evidence to the Senate media reform inquiry and his ideas at the recent media reform post mortem show he is a leading thinker in this field and a true friend to ethical journalists.

I have said many times that an imperative for successful modern journalism is reader trust and reader participation. I reckon David’s openness and goodwill deserve your respect, and I hope it will earn your constructive input.