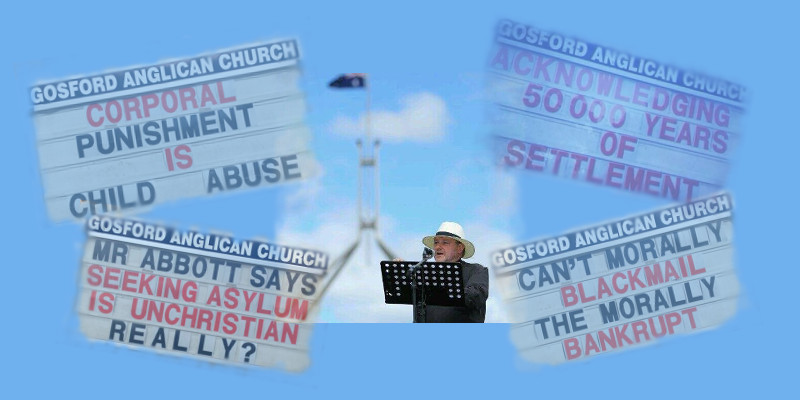 Priest at Gosford Anglican Church
Fr Rod Bower is an Anglican priest and social activist. He has been the Parish Priest in Gosford, NSW, for 16 years and is a passionate advocate for asylum seekers, the environment, social justice and human rights.

Fr Rod Bower is famous for the messages on human rights and social equity which he posts on the board in front of the Anglican church in Gosford. He was a speaker at the MarchInMarch rally in Canberra and is outspoken across a range of public policy areas. 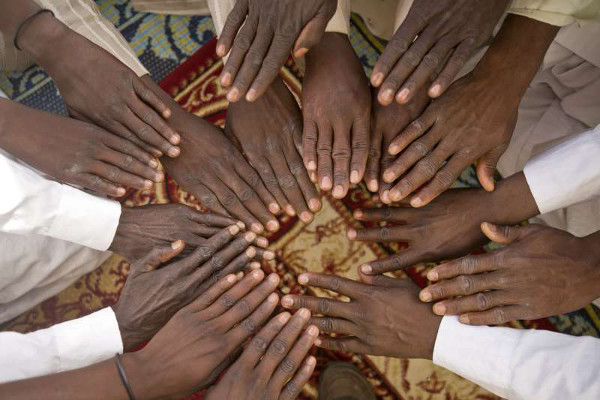 “I am not a racist! But…” We have all heard it and many of us have said it, but what does it mean?

We see it all the time, what we hate most in others is often what we are trying so strenuously to deny in ourselves. What is true for an individual is also true for a group or even a nation. The corporate shadow is the collective unconscious and is so easily projected onto another group. This ‘shadow dynamic’ empowered in the past the Nazi regime, apartheid and the segregationists of the southern states of the United States. These are classic manifestations of the phenomenon of the projection of the shadow. Closer to home, there is the shameful way in which we later arrivals treated Australia’s Aboriginal People.

The Abbott Government has tapped into the ‘but’ part of our ‘I am not a racist’ mantra.

In this ‘shadow dynamic,’ the ‘enemy’ is created and all the secret sins of a people are projected onto and, hopefully, though rarely, eradicated in this created enemy. It is the projection of the perceived superior onto the assumed inferior. It is the cause of much of humanity’s atrocities and pain throughout history. It is the proven tool of the regime that seeks nothing but power. It is the chosen weapon of the sociopathic leader, and a tried and tested system of social control.

The unrecognised shadow always leads to hidden behaviors – we all remember the anti-gay morals campaigning pastor with the gay lover on the side. Then there is us, the nation of people who champion a ‘fair go’ while all along denying basic human rights to others.

The tabloid press and radio shock jocks are also great channels for the expression of the shadow. Day after day we hear journalists and DJs decry the ‘dole bludgers’ while advanced lurkers in the shadow call in and complain that society is going to the dogs and it’s all ‘their’ fault. Tabloids rail against the ‘do-gooders’ and ‘tree huggers’ in a sad and pathetic reversal of the shadow; and under their shadow casting cloud, we continue to deny and hide our more compassionate selves for fear of the vulnerability that exposure brings.

Above all else, it is the government of the day that can exercise the national corporate shadow. Sometimes this can be done unconsciously and unwillingly, at other times with manipulative and intentional malevolence. I fear the latter more accurately describes our present situation.

The Abbott Government has tapped into the ‘but’ part of our ‘I am not a racist’ mantra. Abbott and Morrison have completely understood our latent racism and protectionist proclivities. They have facilitated the expression of our shadow and by controlling the information in a very clever way regarding the reality of this work, we are not confronted directly with either the reality or the consequences of this projection.

The very nature of the shadow means precisely that it must remain in the shadows. The minute it is brought into the light of our awareness, it must be both owned and dealt with through integration into our psyche, or it must be eradicated.

At the moment the government is keeping our shadow hidden from view with calculated precision under the direction of a team of professional spin doctors, costing the Australian taxpayer over $12 million a year. We will permit just about anything and pay almost any price to deny our shadow.

Comments contrived to hide our darker selves from ourselves include: “We do not comment on operational matters”; “I have already answered that question”; “Australia is conscious of, and intends to meet, its international obligations” and “We do not provide shipping news to people smugglers”. These verbal constructions are a proven and effective tool for hiding the consequences of shadow work.

The last statement is particularly telling. If the current policy is the deterrent that we are being told it is, then it would make sense that this information should be shared more widely. The more accurate information available about the misery faced by asylum seekers, then surely the better and more effective the deterrent would be.

Unfortunately the down side of this for the government is that it would allow us, the Australian people, to see our shadow, and that would never do!

For if we did see our shadow, we would have to make a series of challenging choices regarding what we do with it: are we likely to integrate our shadow and deal with it, working through the issues of our racism and the consequences of its application?

No, we would probably have to get rid of it, projecting it onto the Abbott Government itself, and thus eradicating this ‘evil’ from our midst at the next election. Serving only, of course, to allow the shadow to again roam free, seeking out its next incarnation in a government. A government that again would erroneously believe that this self-seeking shadow might be captured, tamed and managed for its own purposes.

This can only ever be a short-term goal and it always leads to medium-term self-destruction. The Howard Government serves as an example of this. John Howard captured our shadow during the Tampa Crisis and then overreached in the ‘Children Overboard’ fiasco. We saw our shadow and proceeded to annihilate it, or so we thought.

The ‘deceits of spin’ cannot last forever and we will soon begin to catch a glimpse of our darker side. We will, of course, not be able to cope with this challenge to who we believe we are, and will, eventually no doubt, consign the Abbott Government to a dark history.

This vicious cycle will continue on its destructive path with its accompanying misery until by some inconceivable leap in human consciousness we, as a people, are able to say: “I am a racist! But …”.