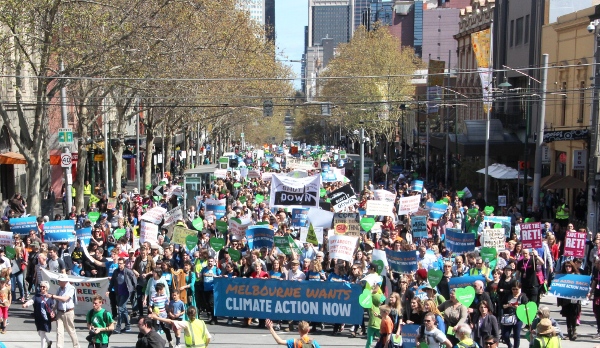 A beautiful spring day brought out the crowds to attend the Peoples Climate Melbourne rally. But a hum had been in the air that this was going to draw a large crowd. As it turns out, over 30,000 people turned up and marched from the State Library of Victoria to the Treasury Gardens through Melbourne’s streets demanding greater action on climate change .

There were short speeches outside the State Library of Victoria by Labor’s Shadow Minister for the Environment, Mark Butler MP (watch video), Senator Christine Milne, leader of the Australian Greens (watch video), and Professor Tim Flannery of the Climate Council (watch video).

Pacific Warriors also did a war dance to the crowd, although most could barely see the dance performed. Even from my vantage point several metres away I only caught the tops of their heads due to the circle of photographers and TV cameras.

One could tell there were tens of thousands here as the library forecourt was packed and Swanston Street soon became packed as well once the speeches started.

One of the strange ironies was the lack of police presence at the Victorian State Parliament preventing people from climbing up more than the first row of steps. Only media accredited journalists usually have access to the higher vantage points to view protests. But as State Parliament was not a focus or destination of the protest, there was no police restriction. Strange when you consider the “high alert” on terrorism that the Abbott Government has promoted, while ignoring the much greater threat from the impacts of climate change and global warming. I took advantage of this access to take a number of photos of the huge crowd coming up Bourke Street and turning into Spring Street.

I followed the march further down Spring Street then set up and photographed the constant stream of signs and banners and people going past. They seemed never ending, although it was probably about half an hour as people streamed into the Treasury Gardens.

There was a wealth of home made signs linking climate change issues with the war on terror, mandatory offshore detention of asylum seekers and the government’s attitudes to the renewables sector, science and scientific research. Some of the more poignant ones focused on what state we will leave the world in for our kids, grandkids and future generations. 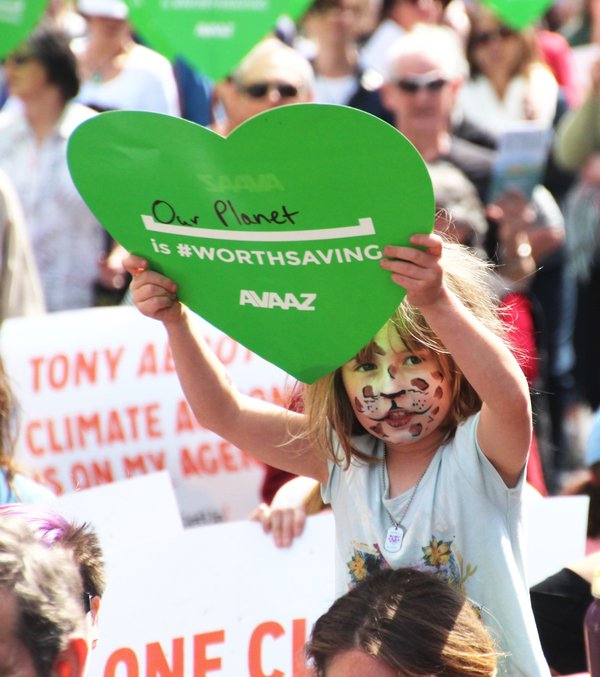 As with many protests, quite a few people had come just for the march and there was a steady stream of people leaving the gardens. But many people stayed on lounging on the grass soaking up the spring sunshine listening to speakers.

I only caught two speakers at the Treasury Gardens but both were interesting and thought provoking. Mark Smith from Surf Coast Air Action spoke on the need to close the Anglesea coal fired power station and coal mine (watch video). (See my report on Anglesea community want Alcoa mine shut down)

Professor Rob Moodie from Melbourne University spoke on the impact of climate change on public health and the need to take preventative action in mitigating climate change (watch video).

Here is how The Age reported the protest in the article Melbourne rally for climate change attracts 30,000 people. GetUp! campaigns chief of staff Erin McCallum told The Age, “This is a clear testament that Australians want climate action regardless of what Tony Abbott and his government are doing right now. The key message today is we’re doing what he won’t, we’re standing up, we’re taking action as consumers, as citizens, as Australians around the world and all around Australia today.” 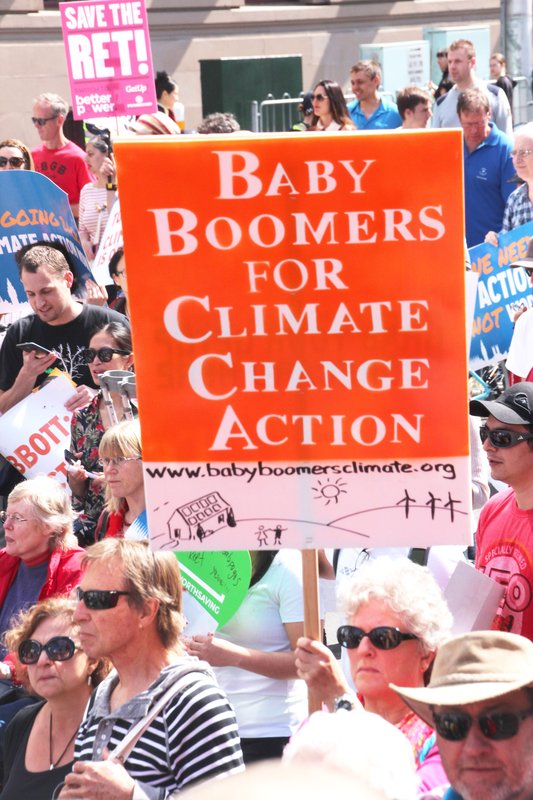 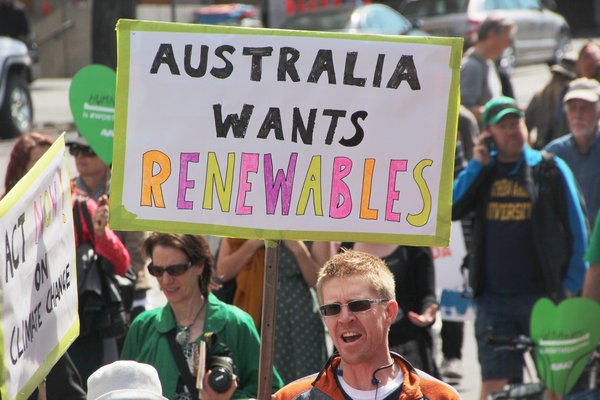 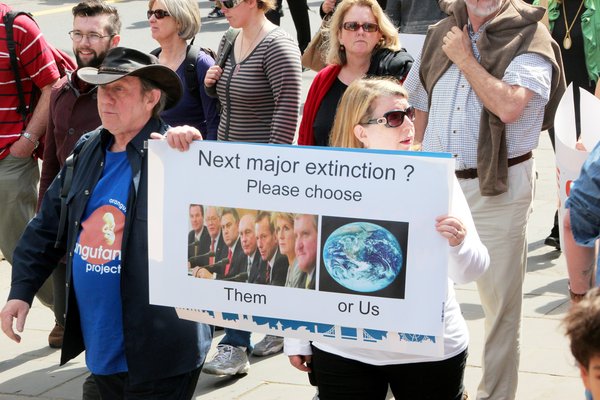 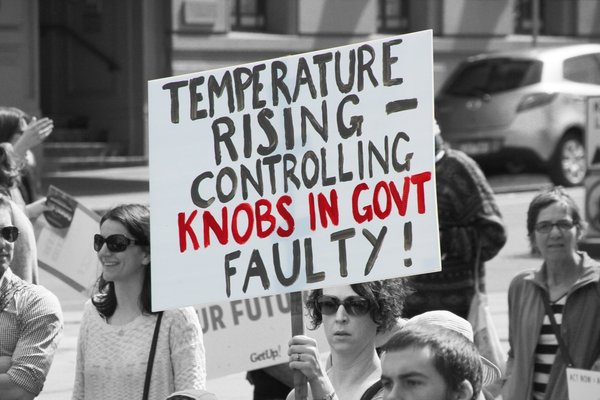 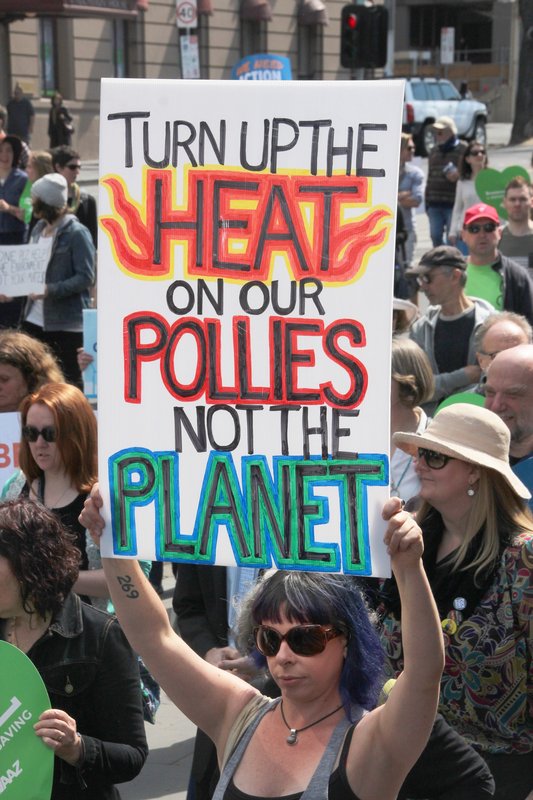 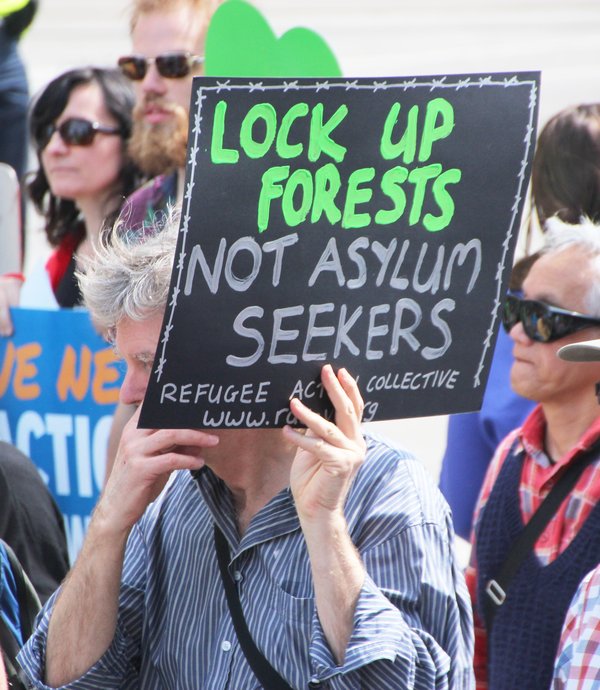 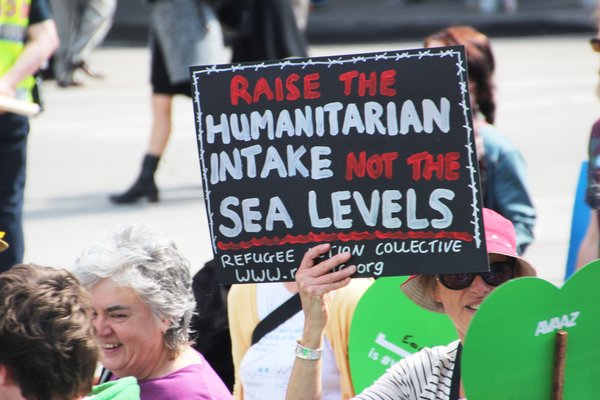 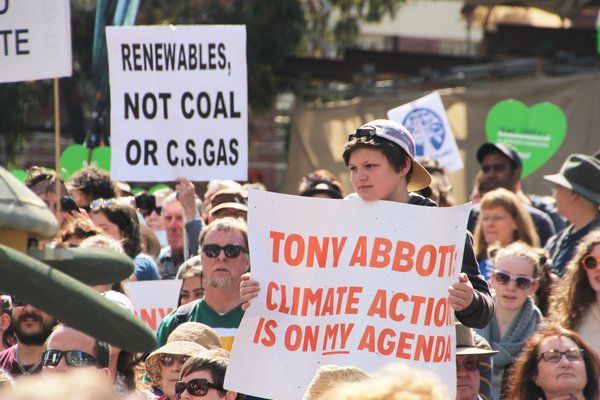 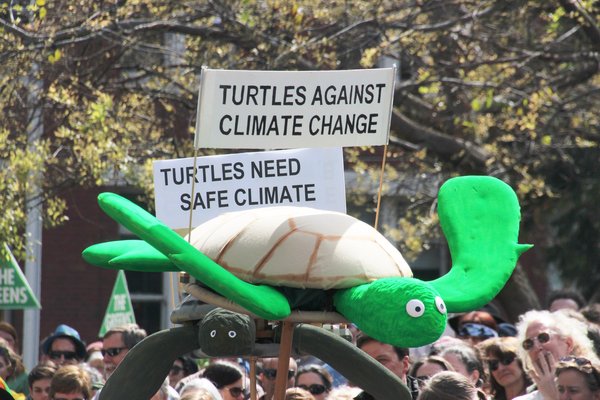 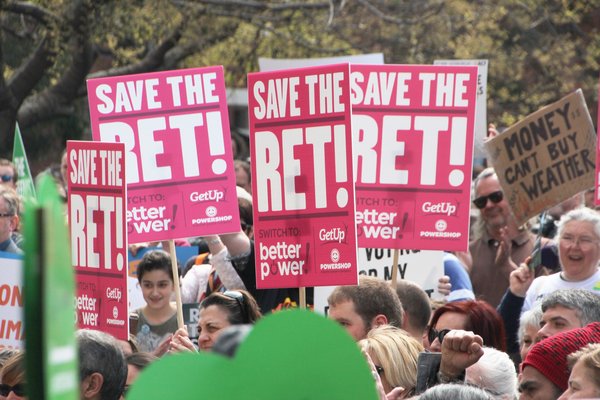 More photos of the rally are in my Flickr photo gallery.

While quite a few people from regional areas attended the large Melbourne event, providing contingents with their own banners, there were also many smaller events around Victoria including in Bendigo, Castlemaine, Geelong, Kyneton, Mildura and Albury, over the border in NSW. Other capital cities around Australia and regional towns also held successful events.

In Geelong there was a good attendance of about 900 people at a march and waterfront rally. See report at Yes to Renewables.

Thanks #Geelong for turning out in big numbers at the #PeoplesClimate March to show how much you care pic.twitter.com/cR367LZCxC”

In Bendigo about 250 people held a picnic and discussed the impacts of climate change. Watch or read James Wight’s speech in Bendigo at Precarious Climate website.

Great crowd here in Castlemaine! #PeoplesClimate…not warming, dying. As John Kennedy would say: “Do something!” pic.twitter.com/TR3iInX7fQ

According to a report in the Sunraysia Daily about 30 people attended Mildura #peoplesclimate protest at the Silex demonstration solar power station currently turned off.

South West Victoria joined in with a successful event at the coastal town of Warrnambool:

People from several South Gippsland towns also came together for an event:

Across the border from Wodonga, an event was held in Albury:

Early reports said that about 310,000 people rallied in New York in a sea of people rising to demand politicians and businesses act on climate change. In fact, the crowds were so great event organisers later revised their estimates upwards to 400,000 people, after “reports came in of tens of thousands more protesters marching outside the official route, streaming down avenues in midtown Manhattan. At 5:00pm, march organizers had to send out a text asking marchers to disperse from the march route because the crowds had swelled beyond the route’s capacity.”

“Today, civil society acted at a scale that outdid even our own wildest expectations. Tomorrow, we expect our political leaders to do the same,” said May Boeve, Executive Director of 350.org.

UN Secretary General, Ban Ki-moon, UN Framework Convention on Climate Change Executive Secretary, Christiana Figueres, and their families and members of their staff joined the huge rally along with various celebrities and US members of Congress.

You can watch a brief aerial view of the march.