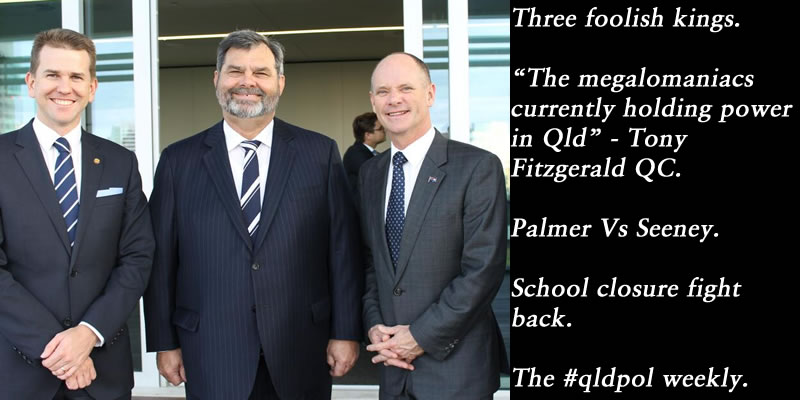 Unemployment at 6.3 per cent.

Qld Treasurer Tim Nicholls gets it wrong – where the solar households actually are.

Open the schools – The comeback kids victory against the Newman Government.

Coming to a suburb near you for Queensland election 2015, the young LNP. 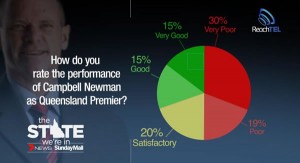 A ReachTEL poll for 7 News and The Sunday Mail has shown Campbell Newman’s “very poor” rating has slipped to 30 per cent.

For primary party votes, Palmer’s United Party (PUP) has risen into the teens for the first time at 13pc.

A general election is due in the first half of 2015. Full details of the poll can be viewed at “7 News / Sunday Mail Queensland – The state we’re in – Cost of Living”. 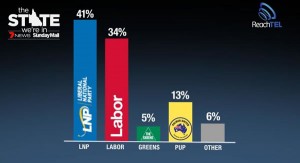 ReachTEL: In first preferences, PUP has risen to 13pc.

Clive Palmer and the Newman Government do not play well together with their coal mines, trains and ships.

Last week, Deputy Premier Jeff Seeney alleged that in 2012 Clive Palmer sought favourable treatment in the approval of coal mines, railways and ports in the Galilee Basin. He forwarded documents to the Crime and Misconduct Commission (CMC) to prove his allegation.

However, Seeney made no specific complaint to the CMC about Palmer, simply sending documents of correspondence between his department and Palmer’s Waratah Coal company.

Palmer also cited this weeks ReachTEL poll in which his Palmer’s United Party (PUP) rose to 13pc in the primaries as a reason for Seeney making allegations against him.

Palmer denied all allegations and began legal proceedings against Seeney in the Supreme Court, describing him as a “criminal” and a “liar”.

Also, in a robust conversation on @612Brisbane with Steve Austin, Palmer began to detail a fresh allegation against Seeney but was stopped by the broadcaster who deemed it inappropriate. Austin repeatedly asked Palmer if he would take the new allegations to the CMC.

Palmer declined, saying that he had no confidence in the CMC due to a loss of independence with recent Newman Government changes. He went on to explain that the best place for action was in the Queensland Supreme Court.

In a separate case, Premier Campbell Newman is also being sued for defamation by Clive Palmer.
.

Unemployment at 6.3 per cent

May data shows Queensland’s unemployment is at 6.3pc, up from 5.5pc when the Newman Government first came to power in 2012. You can read more at the NoFibs labour force monthly update.

More trouble for the government this week with the appointment of Chief Magistrate Tim Carmody to the role of Chief Justice.

The position is being vacated by Paul de Jersey QC who was going on to become Queensland’s next Governor.

The decision raised the hackles of Queensland’s legal fraternity who saw Carmody’s meteoric rise to CJ after only nine months as a CM as too quick.

Carmody had also been too willing in the eyes of the legal fraternity to comply with the Newman Government’s wishes over the controversial anti-association laws, Vicious Lawless Association Disestablishment (VLAD). Where other magistrates were unwilling to reject bail and send offenders straight to solitary confinement, Carmody had stepped up to hear all bail requests. Accused were transported from all over the state to Brisbane to have their appeal for bail heard in Carmody’s court in Brisbane.

Prior to the chief justice appointment, Tony Fitzgerald QC publicly warned Carmody that he should “not allow his ambition to subvert his personal integrity”. Citing many conversations with people, he also warned that; “Queensland is in danger of going back to where it was 25 years ago”.

After the decision, he was less than impressed with the Newman Government describing them as “megalomaniacs”. 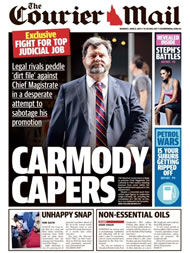 The Courier Mail front page alleges a dirt file being run on Tim Carmody in his promotion to Chief Justice.

Carmody had been a long shot choice, coming from outside the circle of Supreme Court candidates. A more suitable person may have been Court of Appeal president Justice Margaret McMurdo.

However, she had been betrayed by Attorney-General Jarrod Bleijie when he revealed confidential discussions to The Courier Mail. In March, given the number of women appointees, she had publicly questioned if the Newman Government had a bias against females in the judiciary.

Bleijie responded angrily the next day. He detailed what had been discussed and alleged favouritism on her part by requesting her husband be given a Court of Appeal position.

The appointment of Carmody also raised the ire of former Queensland Solicitor-General, Walter Sofronoff, who was critical of the process in choosing Carmody. He had resigned to Bleijie without giving an official reason shortly after the McMurdo conversation was publicly revealed.

Late on Friday, another shock resignation occurred with Queensland Bar Association President Peter Davis calling it quits. It was alleged Bleijie had betrayed his confidence by leaking private discussion over Carmody’s appointment to The Courier Mail which it ran on its front page alleging a “dirt file”.

The article was light on details. However, it was enough to confirm speculation to Davis that Bleijie was a leaker.

“By Friday morning (6 June), news was filtering back to me from various sources, including details of what I had discussed with the Attorney-General on Tuesday,” he wrote in a statement.

“Some of that information could only have come from a participant in the meeting. Some of the information was a distortion of what had been said.”

On 7.30 Queensland, Sofronoff once again condemned Bleijie for revealing details of confidential discussions. As he had done in the past, called for Bleijie to resign.

“It is essential that you can speak in confidence and you can’t do that with this man [Bleijie].”

The Australian Bar Association had also been watching what was happening in Queensland. President Mark Livesey backed calls for Bleijie to resign.

“Those who were sought out for their views were told that their views would be kept confidential and regrettably that has not happened,” he said.

As for Carmody, lacking experience, he described himself as not being the smartest lawyer in the room. However, he appealed to be given a go on @612Brisbane and told listeners that most of his critics had conversed with him before going public.

Premier Campbell Newman had previously offended the Queensland judiciary by describing them of “living in ivory towers”. At the official media announcement for Carmody, he described him as the “right bloke” for the job.

Following on from NoFibs story last week, “Those solar powered, champagne sipping, latte drinkers”, the Guardian Australia’s Nick Evershed found that “Solar panels popular in Queensland’s poorest suburbs, not with the ‘latte set'”. The article debunks Queensland Treasurer Tim Nicholls’ claim that solar panels have been installed in the state’s wealthiest suburbs. Further proof, that with the Newman Government the reverse is most often true.

Brisbane Times senior reporter Tony Moore also backed this up with Energex data pinpointing the cities of  Caloundra & Ipswich as those with the highest proportion of solar installations across the state.

Solar installations are popular in the electorate but the government continues to remain oblivious. 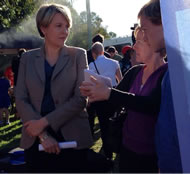 Open the schools – The comeback kids victory against the Newman Government.

Old Yarranlea Primary school was one of six closed by the Newman Government at the end of 2013. Reasons were vague but appeared to centre around the fact that it didn’t have enough students and was considered “unviable” by Education Minister John-Paul Langbroek.

The 1888 heritage listed building was originally constructed on the Darling Downs 140 years ago by the Yarranlea farming community. It was moved to Brisbane’s Griffith University grounds in 1987 to become a museum. A Griffith University lecturer, Dr Geoffrey Orr, saw the potential to use the facility as a training ground for student teachers. The school reopened with 18 students with a multi-age platform.

The school had a long tradition of providing intensive learning to students. The former Bligh Government had given it a tick of approval for its’ direct action approach to learning.

It was unique, outside the norm, small classes with higher learning but something that wouldn’t fit with the conservative minds in power.

However, on Friday, the breakthrough came. With the building sitting untouchable by the state on Griffith University grounds, the school’s spokeswoman Adrienne Innes announced to @612Brisbane the campaign in switching the school from the status of  “state” to “independent”. It meant the school could now reopen for term 3 of 2014.

The debacle around Yarranlea is yet another example of the Newman Governments failure to understand and listen to the community.

Campbell Newman’s Director-General Jon Grayson is once again in the news. Right to information conducted by The Courier Mail has shown how he advised on the coal seam gas industry to the state government whilst having a twenty-five per cent stake in the industry through a company called Gasfields Water Management (GWM).

The Queensland arm of Australian Water Holdings (AWH) also had a stake in GWM.

AWH has been involved in a series of investigations in New South Wales under the Independent Commission Against Corruption (ICAC).

Unlike NSW, Newman has ruled out an investigation into Grayson’s actions by the Crime and Misconduct Commission (CMC).

You can read more about the link from AWH to Queensland at NoFibs report; “Cash for Campbell, Newman named in ICAC inquiry“.
. 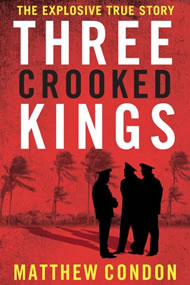 This week, chronicler of the “Joh years”, Matthew Condon was interviewed on @612Brisbane by Steve Austin in which he spoke about “the dark days of Queensland”.

He also touched on the current Newman Government in relation to its’ VLAD laws, referencing an incident involving Queensland police on the Gold Coast.

“An individual police detective who failed to put the handcuffs on a particular individual while he was marching that person to a police car was reprimanded because the cameras didn’t pick up that this man was shackled and the full force of the law, thus the legislation, was being demonstrated on the television news. If we get into that sort of stuff too, it’s dangerous.”

He also wrote a piece for The Courier Mail warning that the “Spectre of Joh looms large”.

“If the LNP thinks it can lower a Bjelke-Petersen/National Party-style government template over contemporary Queensland, it’s in for a rude shock.

It may find that repeatedly pushing a square peg into a round hole results in unwanted friction. And too much of that can start a fire.”

Campbell Newman has pledged to extend the grounds for the Ronald McDonald house in Brisbane to make it the largest in the world.

Let’s hope this is one pledge not made for political purposes and the government follows through.

Coming to a suburb near you for Queensland election 2015, the young LNP.

The Young LNP Campaign Flying Squad for the state election has been launched by @theqldpremier in Ashgrove #qldpol pic.twitter.com/dna7IqkD2N

The electioneering has begun for the Stafford by-election with the LNP running out their signs for Bob Andersen. However, “Bob” isn’t his real name. For more on this intriguing story, see NoFibs report “They call me Bob”.