Time to get NBN active, GenY 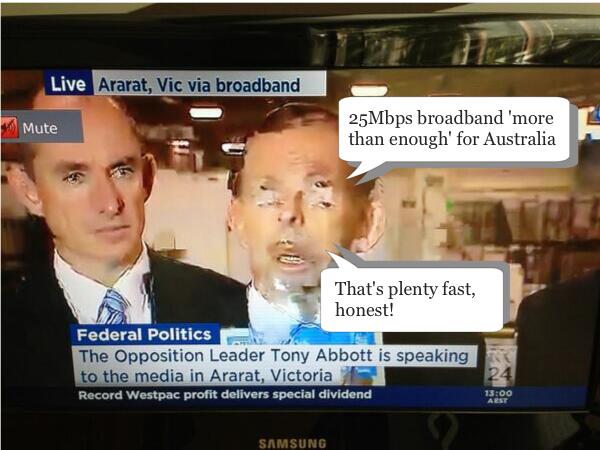 Josh Taylor of ZDnet conducted a 45-minute “Communications Debate” between Conroy and Turnbull today. He did a splendid job with a couple of unruly protagonists not out of place in a kindergarden.
My praise and plaudits to Josh: well done, for conceiving and carrying out this head-to-head.

The most reported part of the “Debate” was when Conroy got under Turnbull’s skin and was called “a grub”.

There are a few things about this “Debate” I think are imporant:

I think Turnbull misjudged his audience, treating them like the usual Mainstream Media, and either underestimated Conroy or came unprepared (shown by retreating to personal abuse) and didn’t say anything new, nor clearly & succinctly answer the questions asked.
Yes, he talked, a lot, and in the moment always sounds plausible.
But as one tweeter opined: What did he say? I can’t remember now he’s stopped talking.

Turnbull threw away a massive opportunity: he could’ve sold himself and his plan to the technical influencers in the electorate. And done so easily & simply by clearly annunciating his intentions.

The bigger question, the headline of this piece, is the comparative silence of Gen-Y in this NBN debate. If Turnbull was bombarded with 5-10,000 emails and tweets after each of his obnoxious media performances, like today’s, would he moderate his behaviour? You bet!

Gen-Y can take onto itself using the tools that it understands and uses everyday to make its point. We’ve yet to see a spate of mashups or clips ridiculing Turnbull as he pompously stabs his finger making one asinine, misleading point after another. The way the “Kony 2012” meme spread displays what is possible, when driven by someone who cares about a topic.

While those might get engagement with Gen-Y, they wouldn’t get through to the politicians and their parties.

If Gen-Y wants a better future for itself, it has to work for it. That means talking to Politicians and Parties in the language they understand and in the forums they, not Gen-Y, look to.

First, Gen-Y needs to recognise that Politicians only appear deaf; they are, in fact, vitally attuned to polls and market sentiment. Their #1 priority is getting re-elected: No votes, no job. Polls are what Pollies live and die by. Affect them and affect the policies.

But only talking to your mates and having a bit of fun on social media isn’t enough. Gen-Y has to reach out to others, in their heartland, to make their message heard:

The Vietnam Moratorium marches and demonstrations were the Baby Boomers collectively putting their views about their future to older generations and affecting the political process. The nature of war in the West changed fundamentally: conscripts and lots of casualties became politically non-viable. Warfare became very expensive and “messages” tightly scripted and controlled.

Gen-Y has to understand that it gets ONE chance to create the Internet it will have to live with daily for the next 50 years. This is that one chance, now.
They have a voice, they have to learn to use it, they have to fight for what they believe in and want or ‘forever hold your peace’.