No Fibs’ and Tony Fitzgerald’s #qldvotes Editorials: Our chance to demand honest Government 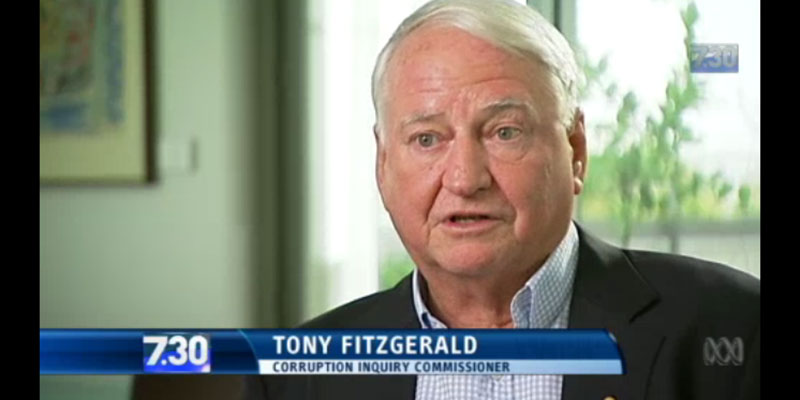 The Honourable Gerald Edward (Tony) Fitzgerald AC, QC is a former Australian judge, who presided over the Fitzgerald Inquiry. The report from the inquiry led to the resignation of the Premier of Queensland Joh Bjelke-Petersen, and the jailing of several ministers and a police commissioner. He was the youngest person to be appointed as a judge of the Federal Court of Australia.

by No Fibs editor Margo Kingston

The big picture theme of the Queensland election campaign has been the extraordinary alliance of people and parties across the political spectrum to oust the LNP.

Alan Jones led the right wing attack, personally backing all the minor party and independent MPs. He champions the preservation of prime farming land from Big Coal and Coal Seam Gas, and alleges cronyism and corruption by the LNP in the mining industry’s favour.

In the centre, Dr Chris Davis and Tony Fitzgerald have condemned the collapse of donations transparency and the dismantling of Fitzgerald’s anti-corruption reforms.

Environmental groups have thrown everything into asking Queenslanders to vote for their greatest natural asset, the Great Barrier Reef, and to inform voters of the abandonment of key environmental protections and climate change policies under the LNP.

My feeling is that Labor based its campaign on restoring its base and seriously challenging the LNP at the next election. To me, Queenslanders deeply concerned about the big-picture issues of our environment, democracy, accountability and government for the people, not the powerful with the big pockets, have put Labor in a position to fall over the line.

The people of Queensland do not trust the LNP government for good reason, and their distrust can only have grown during the campaign. Threatening voters with revenge in seats where their LNP MP lost office is despicable bullying, and making allegations against Labor without evidence is ethically indefensible.

I believe Labor will win office, probably as a minority government. The LNP cannot lead a minority government because all minor party and independent MPs have pledged to keep Queensland’s assets. I believe the interventions of Jones, Davis, Fitzgerald and the environment movement on behalf of honest government governing in the public interest has been crucial to the ALP’s success, whether they win or just fall short.

No Fibs recommends that voters put the LNP last.

I live in Gaven on the Gold Coast. I have voted Greens since the 2001 federal election, but will not do so this time in protest at the Queensland Greens’ decision not to suggest preferences in four winnable seats – Barron River, Cairns, Mt Ommaney and Bundaberg. To me, this is an election so crucial for honest government and the environment that is is indefensible for the Greens to risk the return of an LNP Government.

My MP is the independent Dr Alex Douglas, who left the LNP due to concerns about its unethical behaviour. He has strong environmental and ethical credentials. As someone committed to forcing the Big Parties to lift their game, and knowing that if reelected Douglas would be personally responsible for his decisions, I will give him my first preference. I am very impressed with the Labor candidate Michael Riordan, and will give him my second preference. I will put the LNP last.

Douglas and Riordan have worked closely together in the camapign, and after widespread destruction of their signage, the PUP candidate has provided security for both of them free of charge. This is a microcosm of the cooperation of Queenslanders across the political divide to oust what I believe to be a profoundly distasteful government.

As a child of the Sir Joh era, I am casting my vote in honour of Tony Fitzgerald.

I agree with every word of his #qldvotes editorial, published below.

The lessons of Queensland’s dark past have been disregarded. This Saturday, Queenslanders must make clear their desire for good governance and effective democracy, writes Tony Fitzgerald.

“It is not because a part of the government is elective, that makes it less a despotism, if the persons so elected possess afterwards, as a parliament, unlimited powers. Election, in this case, becomes separated from representation, and the candidates are candidates for despotism.” – Thomas Paine, Rights of Man, (1791).

Historically, practical democracy for Queenslanders has consisted of a right to choose between the Liberal National Party and the Australian Labor Party every few years.

Legally, whichever party is chosen can pretty much do as it pleases until the next election. There are no enforceable checks and balances. With its single house of parliament, no bill of rights, and history of political malpractice, the state is extremely vulnerable to the misuse of power.

However, there are unenforceable but nonetheless real constraints implicit in the nature of its political system. In a representative democracy like Queensland, Parliament exercises the people’s collective power on their behalf and for their benefit. The political party which controls Parliament is expected to use its power for the “peace, welfare and good government” of the state. It cannot legitimately exercise its power for its own benefit or the benefit of its supporters.

As former United States Chief Justice Earl Warren pithily said: “In civilised life, law floats in a sea of ethics. Each is indispensable …”

Effective democracy needs principled politicians; an independent, impartial judiciary; and, as the American author Norman Mailer said, “… individuals not only ready to enjoy freedom but to undergo the heavy labor of maintaining it”.

US president John F Kennedy pointed out that “without debate, without criticism no administration and no country can succeed…”. It’s part of our role as citizens to hold government to account, especially when the media won’t or can’t do so.

I have been, and am, critical of Queensland’s Liberal National Party Government, not because of a preference for another (or indeed any) political party but because I don’t want to see Queensland sucked into another vortex of mismanagement and ultimately serious corruption. The Government’s huge majority; a small, inept opposition; biased media support; inexperience; ignorance; and arrogance doubtless made a volatile combination.

Nonetheless, the Government’s self-indulgence is astonishing.

As usual, the parties are at loggerheads over which is the superior economic manager and, as usual, politicians’ dubious claims and assertions make it difficult for most of us to discern what’s correct, what’s spin and what’s simply untrue. Unfortunately, politicians routinely oversimplify issues and present very one-sided views, each pretending that its policy is not only correct but free from disadvantage.

Even with a massive majority, it’s difficult for a Government to claim a mandate to do things it said that it wouldn’t do.

The Government plainly had a mandate to pursue its preference for development over the environment. However, it’s at least questionable whether it exceeded its mandate by so radically weakening environmental protection and approving so many controversial projects, breaking pre-election promises and benefiting Liberal National Party donors.

Even with a massive majority, it’s difficult for a Government to claim a mandate to do things it said that it wouldn’t do or to use its power to benefit itself or its supporters. It’s been claimed that the government has:

The Government’s casual allocation of benefits to supporters and donors was unfortunately reflected in its cavalier attitude to donation laws and its blatant nepotism, which was cynically endorsed by the Premier as “just the way of the world”. These are, on any rational view, steps which will in time lead to serious corruption.

In the circumstances, it’s little wonder that there was a public outcry when the Government subverted and weakened the state’s anti-corruption commission and then, to escape censure, sacked, stacked and otherwise reduced the effectiveness of its parliamentary committee. Those are the actions of politicians intent on evading scrutiny, not the actions of a responsible government committed to good governance and effective democracy.

The so-called “bikie” legislation is yet another troubling example of political excess.

When it was in opposition in 2009, the Government condemned proposed legislation which was far less harsh than its ridiculously named Vicious Lawless Association Disestablishment Act 2013 – seemingly a nostalgic bow to Joh Bjelke-Petersen’s beloved “States of Emergency” – and the statutes associated with it.

Law and order campaigns based on a manufactured political climate of exaggerated fear are the universal starting point for populism and fascism.

They are also a ticking time-bomb for the judiciary. In the past, judges in other countries, for example South Africa and Germany, have to their shame enforced oppressive laws rather than resign. It is an horrific prospect for Queensland judges that they face the same dilemma with the “bikie” laws. There is ample information available to show that solitary confinement for lengthy periods commonly leads to despair and mental deterioration. At least some judges will shrink from imposing a manifestly grossly excessive sentence.

Law and order campaigns based on a manufactured political climate of exaggerated fear are the universal starting point for populism and fascism.

As Saturday’s election draws near, the Government has ramped up its attempts to convince voters that the opposition is soft on crime – bolstered by grossly exaggerated claims and misleading statistics that now seem to be a lynch-pin of its re-election campaign. Its scandalous innuendo that the opposition is funded by bogey-men “bikies” is a reprise of its earlier allegations that, by carrying on its traditional, essential function of representing accused persons, the legal profession supports criminals.

Amazingly, the Government included unprecedented attacks on the courts and the judiciary, accusing their application of the law in accordance with their oath of office as being out of touch with reality and the wishes of “ordinary Queenslanders”. It then showed its contempt for the courts by appointing a totally unsuitable Chief Justice.

This “snap election” over the holiday period is yet another departure from precedent, designed for the sole purpose of electoral advantage. Added to that are the old-fashioned “stop writs” to halt criticism and blatant political blackmail with threats that, if the government is re-elected, benefits promised as an inducement to vote for the Liberal National Party will not be honoured in electorates in which that party’s candidate is unsuccessful.

The irrationality of all these shenanigans stuns me. I am simply unable to understand why a government elected in 2012 would disregard the lessons of the state’s dark past or why the state’s largest circulation newspaper would encourage the government’s follies.

It is perhaps a small consolation that all political parties recently promised to:

Those good governance promises can only be enforced through the political process. On Saturday, Queensland voters will have an opportunity to do so.