TRANSCRIPT: A blueprint for modern Liberals in Allegra Spender’s campaign launch for #WentworthVotes 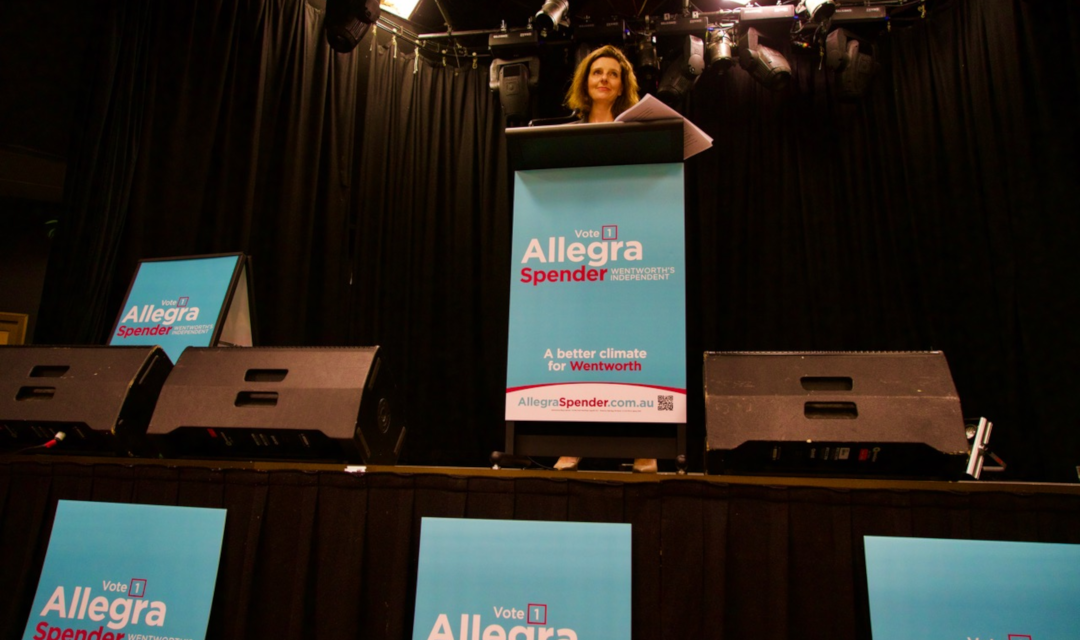 BEFORE WE BEGIN, I’d like to acknowledge that we are on the land of the Gadigal and the Birrabirragal people, the traditional custodians of the land. We pay our respects to elders past, present and emerging.

Thank you, Jillian, for that introduction. You have been an inspiration to me. You and I have talked a lot about this move, and your encouragement has given me enormous strength.

I’d also like to acknowledge that a lot of people have helped me to get to this point. My family, my husband and my kids, my dad, my sister and my brother and our extended family, my friends, who’ve been incredible.

The Wentworth Independents people who saw the potential for change at Wentworth. The supporters, the teams and volunteers who’ve made everything work from behind the scenes. And the hundreds of people who have reached out to me and to the campaign to support since we announced.

And finally, everyone here in the RSL on a rainy Saturday. It takes a village to raise a child and even more than a village to get here today.

Today I’m putting myself forward as your independent candidate for Wentworth.

My campaign officially launches today, but already so many people have asked me, ‘Why are you running?’, and I’d say ‘I’m fundamentally motivated by the same concern that so many other people talk to me about – our kids and future generations’.

Our kids are young. We had three under four, so some pretty busy years. (My children) love doing everything that the local kids love doing – going to the beach, playing in the parks, riding their bikes and scooters, arguing with each other and generally playing fairly nicely together on a good day. We can even drag them bushwalking some days, and the other weekend my friends and I went for a bush walk at the Royal National Park and the kids swam for the first time ever in a waterfall.

Right here in Sydney. It was incredible. It was completely magical.

We live in an incredibly beautiful place and I want my kids and my grandkids – hopefully I will have some – to be able to enjoy it like I did when I grew up here. I want them to have meaningful careers and opportunities like I have. I want them to inherit a world where they can trust the proud Institutions of Australia and are not burdened by the mistakes of their parents.

Their future depends on how we respond to the challenges we face today.

It is so humbling, and really overwhelming to be honest, to look out at this crowd and to see so many people, most of whom I haven’t met yet, who share the same vision for our community. Strangers who’ve come together because you’ve decided that being frustrated on the sidelines just isn’t working for you. That to make change you need to take action, and that you believe we can do so much better. Well, we will not be strangers by the end of this campaign, let me tell you.

Today I’m here to say that I am so honoured to be going on this journey with you.

Today I’m here to say, ‘I am running to be your Voice’.

And that Voice has never been more important than it is now.

We need to act now. And if the local member we sent to Canberra for that action isn’t up to the task, well he needs to get out of the way.

And that is you and me and this campaign – we are those people.

Right now, at this moment in our history, it’s time for principled, informed and community-driven leadership in our federal parliament.

My message to the people of Wentworth is simple. I’m driven to be someone who truly listens, who truly understands your values and will champion what you know to be important.

Wentworth is an amazing place. It’s diverse, it’s vibrant, it’s innovative and it’s beautiful. But it certainly isn’t radical – and I should know.

Wentworth has an incredibly proud history. It is one of only two federal seats in New South Wales that have existed from our very first Parliament. The other is North Sydney, which I’m very proud to say was my Dad’s seat.

And so many people have asked me, ‘What does he think about you running against his Liberal Party?’ And I’m not! I’m continuing to uphold the values that my father and my grandfather stood for and that Wentworth has always stood for.

Today’s Liberal Party is not the same party of my father and my grandfather.

They weren’t radical, Wentworth certainly isn’t radical, and I’m not a radical person at all. But there are those who are trying to paint me and this wave of independents as such.

And to them I say, protecting our environment for our children is not a radical choice.

How far have we sunk that the simple idea that the people of Wentworth should be represented by someone who shares their values and will act for their interest is now called a radical idea?

My father and grandfather taught me to think for myself and to stand up for what is right, and I’m not the only one. There are communities around the country promoting Independents. Why?

And a few people have asked me if I’m tough enough for this job.

It’s true, I’m not an aggressive person. I’m a pretty reflective person. I love to hear both sides of the debate. I like to consider different perspectives and to look at the data. But I think shouting isn’t a strength. I think talking down to people isn’t clever.

I’m a strong person. And I’m speaking out publicly and passionately because I can’t stand it anymore.

I am sick of the false choices that the Parties have created.

You can be pro-environment and pro-business. You can live in the city and care about regional Australia, like we have all showed during the terrible bushfires. And you can be economically responsible and compassionate.

You may have seen our campaign message on the T shirts. It says ‘A better climate for Wentworth’. What does that mean?

The level of waste and mismanagement of our taxes by this government has set a new low. I’ve run businesses, and I know from that experience you need to manage your costs or you will go out of business. And you always need to deliver your numbers. At the same time you need to invest in the future and you cannot hide or shy away from hard decisions.

As anyone who went to school with me would know, I really love numbers. But for this government, the numbers just don’t add up.

We want to keep warming to 1.5 degrees to protect our way of life. But Australia’s 2030 target means that we will either overshoot our carbon budget or we’ll have a brutal transition from 2030 onwards, which will cost jobs and any innovation.

Anyone looking at the numbers like a business executive would never spend billions of dollars in fossil fuel subsidies to obsolete technology that will hamstring our economy.

The Business Council of Australia, also not a radical body, looked at the numbers and decided it is in the best interest of business to have a 46 to 50 per cent reduction in target by 2030 – nearly double the government’s current target. Business looks at the numbers and sees economic growth driven by new opportunities, cheaper renewable energy and hundreds of 1000s of jobs created.

But the government looks at the same numbers, ignores the advice of scientists and of business, and instead plays a political game with our kid’s futures. And Wentworth deserves better.

Wentworth is home to many groundbreaking entrepreneurs. We have what it takes to champion Australia as a place of innovation.

But we need to get on the clean energy boom now if we want to take advantage of our abundant natural assets and emerge as a prosperous leading nation in the new economy.

I share your concerns about the treatment of refugees, the lack of respect for women and the failure to move ahead on reconciliation with First Australians.

In the last four years I’ve been running a not for profit – the Australian Business Community Network – and we work with each of those communities because we know those young people in those communities have so much to bring to this country and they need to be supported.

I have seen first-hand from my own mother the enormous value that creative new ideas bring to the economy. And rest assured I will work to ensure Australia’s rich diversity is valued and that we offer better opportunities to everyone to learn, participate and thrive.

And as an independent I’ll be free to vote on what’s right and what’s fair to everyone.

And I’ll be adding my voice and business experience to the new wave of independents in parliament in Canberra.

By being part of this campaign, you will ensure that the parliament is championed by people of integrity who believe in evidence-based policies and a better future for all. Because really, that is why so many of us are here today.

Thank you all for your support.