SPEECH: Dr Monique Ryan reminds #KooyongVotes we do have a voice, we have a vote 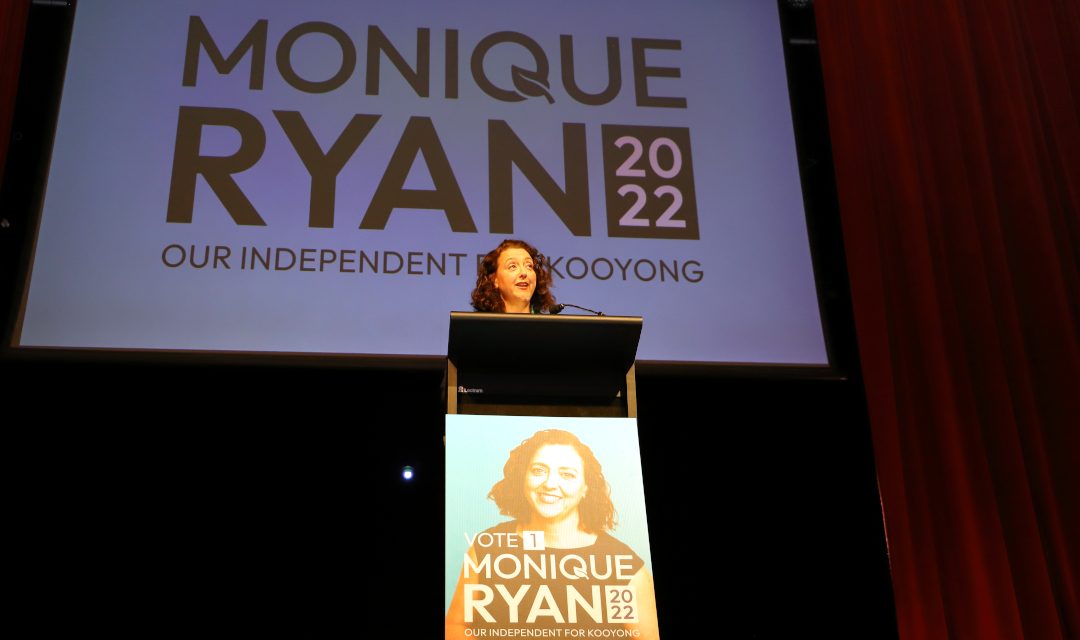 GREAT MORNING KOOYONG! First let me begin by acknowledging the Wurundjeri people of the Kulin nation, the traditional owners and original custodians of the beautiful land on which we stand. I pay my respects to their Elders past, present and emerging, and extend that respect to the Aboriginal and Torres Strait Islander peoples here today.

My name is Monique Ryan, and it is my great pleasure and privilege to be your independent candidate for Kooyong.

Thank you Susanna, Oliver and Virginia for your very generous introductions. I’d also like to thank the very many members of Voices of Kooyong and Kooyong Independents who have worked incredibly hard in the last few months and weeks to bring all of this together.
it is such an incredible honour that you have asked me to step forward and represent this campaign on your behalf.

I’ve met many of you before, but most of you here I am meeting for the first time today. I’m not a politician, and I’m not a household name – yet.

So, I thought I should begin by telling you a little about who I am

I was born and grew up in this area. I am one of seven children. My parents and most of my siblings are here today. When I was a child, Dad worked as a salesman and was in the Army Reserve. Mum was the sort of mother who never stopped; she was always head of the school parents’ association, cooking for industrial numbers of people, ferrying large numbers of children around in her Ford Falcon station wagon, and raising money for various charities before she established one of her own in Nairobi, in Kenya.

It was not easy for my parents to send seven children to private schools – possibly the only day I knew for certain that I was their favourite (however briefly) was the day I won a scholarship for secondary school – but it was a real priority for them and they managed it, with some scrimping and saving and some help from their parents.

I studied medicine at Melbourne University before undertaking training in paediatrics in Melbourne and Sydney. I then trained as a paediatric neurologist in Boston. I’m now head of the Department of Neurology at the Royal Children’s Hospital – running a department of 45 people in one of the busiest public hospitals in this state. I also head a research team studying severe nerve and muscle disorders of childhood. Recently my team gave the first dose of gene therapy ever given in Victoria for a previously fatal genetic disorder – you might have seen a story about that in the Herald Sun yesterday. Those jobs mean that I have experience in managing large budgets and in professional leadership.

My husband and I married in the backyard of our home about 200 metres from where we are today. We chose to raise our three children here in Kooyong. We love the area and have strong ties in the community. I swim in the local pool and play hockey (badly) for Hawthorn. Peter plays footy for an old men’s team in Bulleen and our kids play for the Hawthorn Citizens and Boroondara Cobras. This is our home. We feel proud and protective of it.

So why am I here?

I have a fulfilling and worthwhile career and a busy and happy home life. I am not a politician. Why would I stand for federal parliament?

I am here – and I suspect you are too – because our current Member for Kooyong is neglecting his responsibilities, and because the problems we face are too serious for any of us to sit on the sidelines any more. My job has always been to care for our children and to protect their futures. The current Member for Kooyong refuses to treat his job with the same level of care, and to treat us and our kids with the same level of respect and concern.

I have increasing concerns about the effects of climate change and our government’s inactivity on this front. The clock is ticking but the federal government is refusing to listen to it. Our land is warming, our forests are burning, the seas are rising and our flora and fauna are dying. The effects of climate change are clear to us all, but our government is still spending our money on propping up fossil fuel industries, making the problem worse rather than doing something about it.

Isn’t it time that Kooyong had a representative who understands the urgency of the climate crisis?

We are sick of the tone of political debate in this country, the shallow slogans and sleight of hand instead of real respect, truth and compromise.

We are all shamed by the lack of integrity and transparency shown by our government.

We are alarmed by the increasing lack of social cohesion in Australia and the rise of politics of division.

Our government is more concerned with its short-term political goals than the long-term important issues facing us as a nation.

As a doctor I’m used to seeing problems, analysing evidence, making tough decisions and acting on them as compassionately and effectively as I can.

I’m nominating for federal parliament because I know that I can represent the values and concerns of the people of Kooyong independent of factional loyalties, party intrigue, back-room deals and personal ambitions.

What do we need to do?

We need to change the way we see these challenges and we see our future. Rather than denying the clear and immediate effects of climate change, we need to embrace the opportunities ahead of us in a clean and green economy.

We need to take pride in the fact that we are an innovative community which is already at the grassroots rising to meet this challenge, despite our government’s refusal to do the same. We already obtain 30 per cent of our energy needs from renewables; soon that will be 50 per cent, and we can make great gains very quickly with the existing technologies – even more so with those in development.

We can ensure a prosperous and secure future for our country by replacing fossil fuels with renewable energy sources. In doing so we will reap the economic benefits of cheaper and cleaner power without destroying our reefs and forests.

This government has had close to a decade to do what the Kooyong community wants. It’s time for others to step up and act where they won’t. Only a new generation of politicians will move us from a feeling of paralysis on these issues to cohesive and decisive action.

We will ensure that our children can continue to enjoy the way of life we have. What greater motivation does every generation need than to protect its children’s futures?

We do not have to feel helpless

We need to remember that we do have a voice; we have a vote. It is time for each of us to make our votes count on the issues and values that matter to us.

Kooyong has always had a proud history. Since it was created as an electorate in 1900 it has been represented by many notable figures in Australian politics: Robert Menzies, Andrew Peacock, and Petro Georgiou. Those members were all liberal in the real sense of the word; they recognised that open markets are the best way to boost prosperity and displayed commitment to protecting individuals’ rights.

My husband and I both come from Liberal families, but our parents are dismayed by the Liberal Party of 2021. It is no longer liberal in the best and truest sense of the word; it no longer reflects the values of the community and it is out of touch with its concerns. Some of you may have agreed with Liberal ideology in the past, and some of you have not. Some have previously supported other parties which have also struggled to make an impact on climate change.

We can all agree that in 2021, the Liberal Party has lost its way. It no longer represents Kooyong and Kooyong values. A Liberal Party which shares the values of and votes with Barnaby Joyce is not what Kooyong is about. A federal government which disposes of its elected Prime Minister, then turns on a state in lockdown, is not what Kooyong is about.

It will not be easy. We are up against a formidable machine which has already shown its willingness to smear this campaign – and others like it around the country – with personal and untruthful attacks.

We will rise above that. This is a people-powered community coalition of the willing and the compassionate, of people who believe in truth, integrity, respect, decency and democracy.

We will not be taken for granted any more

We will protect our children’s futures by caring for each other, our community and our home. A vote for me is a vote for our community. I will commit to supporting responsible economic policy with foresight and long-term planning, to integrity and honesty in politics, to fostering true equality and safety for women, and to work for world-standard health and aged care.

My vote will always be independent, informed by evidence and guided by consultation with the electors of Kooyong. The people of Kooyong, like all Australians, value fairness, integrity and respect. We don’t see those values displayed by our government.

We want equality for women and for them to feel safe in our streets and at work.

We want respect for all Australians, regardless of where they or their parents were born.

We want a health system with adequate funding for mental health and aged care.

When our children ask us what we did for climate change, we will be proud to answer that we forced the change that we wanted to see, and that in doing so we changed Australian history.

Kooyong, our climate is changing. It is time we changed with it.