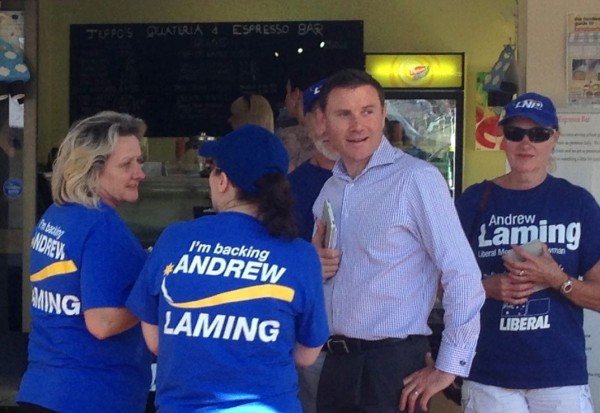 Andrew Laming and supporters not campaigning at Cleveland farmers’ markets

We’ve had a bit of a dark time in politics here in the southeast Queensland seat of Bowman, with a storm erupting on social media over campaign tactics.

It all began when one Redlander went to the Cleveland Farmers Markets last Sunday morning and tweeted about having to avoid a number of supporters of the sitting Liberal National Party member, Andrew Laming MP.

After chuckling in acknowledgment – I also hate having any political supporter shove leaflets in my face when I am shopping – I recalled a tweet from Bowman’s Greens candidate Penny Allman-Payne notifying supporters that The Greens would not be at the markets after the organisers had banned political campaigning.

But the storm had already started.

Being a journalist who follows the union code of ethics, I threw in a few tweets about keeping noses clean and checking facts and the need to establish the truth through photographs.

Within minutes, all the photos and facts any editor would run with were online. Not only were Andrew Laming supporters at the markets wearing political T-shirts and handing out campaign leaflets, but the man himself was there with them.

Reports that Labor’s Darryl Briskey was also there shopping were confirmed, but no photos have emerged to prove the counterclaim that the ALP was campaigning at the event. 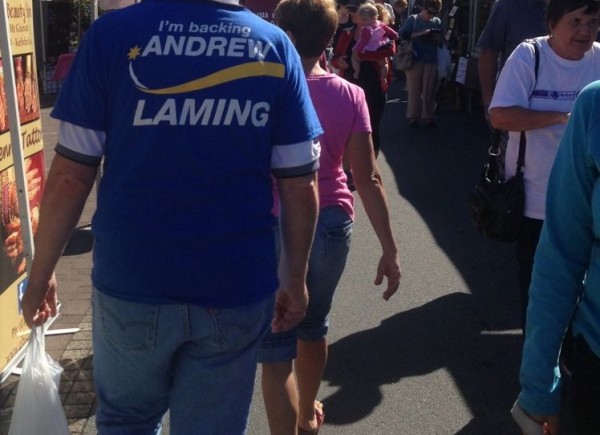 The LNP supporters had not booked a market stall and did not have signs, but were they upholding the spirit of the market’s clear request for no campaigning?

Why would a candidate whose party gained a 10.4 per cent swing at the last election feel the need to disregard the market’s request?

If Andrew Laming ever agrees to my standing request for an interview, I promise I won’t ask him!

It was fascinating to see the story break before he’d even left the markets, forcing Laming to provide responses to a candidate he said he would not respond to further in this election campaign.

In the midst of the fuss I was tweeted by ‘Stephanie’, who accused me of bias in my election reporting for No Fibs.

She seemed genuine when checking her facts on the market’s no-campaigning request with Penny Allman-Payne, but when I tweeted back to find out if she’d been mollified by the facts, ‘Stephanie’ got so nasty I realised I’d sprung the trap of my very first troll.

A good trolling is a milestone for any journalist, so I was a good sport, but ‘Stephanie’ didn’t pause to reflect on this journalist’s ability to report impartially and have a political position at the same time.

Nevertheless, I followed the instructions that an increasing number of tweeting journos have suggested – retweet, reply, and block. Bye-bye ‘Steph’. 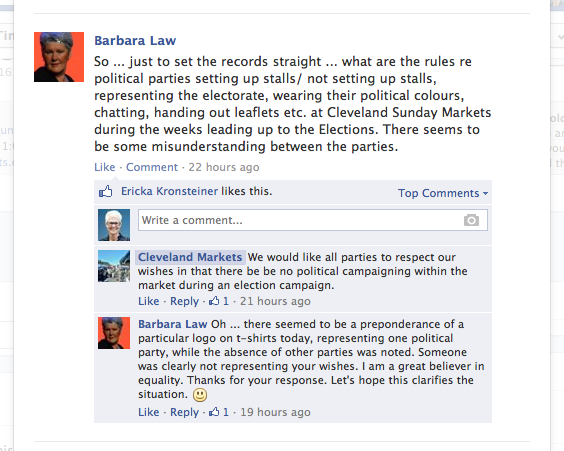 Just when I thought democracy was on the way out in Bowman, the local mainstream media pulled out the stops and announced a candidates’ forum.

No Fibs’ editor Margo Kingston reckons meet-the-candidates events are rarer on the ground the further north you go in Australia. Down in Victoria they can’t get enough of them, but in the tropics, they’re as rare as supporters of daylight saving.

Perhaps Queensland voters are happy with their voting choices? Perhaps they don’t care about having the full spectrum of candidates in the one place at the one time?

Darryl Briskey, the ALP’s Bowman candidate, told me that in his experience such events do little to change people’s votes, but I suspect Redlanders have rarely been treated to what a well-managed candidates’ forum can offer voters.

Editor of the Bayside Bulletin and The Redland Times, Brian Hurst, told me that although the paper has held candidates’ forums before, he’s never been that happy with the result.

This time he’s hoping to attract more than the “usual tragics” by filming the event and posting the video on the paper’s website before the election, and having journalists tweeting live from the Cleveland District State High School language centre during the proceedings.

What particularly inspired me about the plan is that students will be involved in the filming. Putting democracy-in-action in the pathway of younger minds is a positive result for any election campaign, one that all ideologies benefit from.

Wisely, Brian is not making an enemy of the social media with this event and has generously allowed me to be there with my tweeting thumbs working overtime.

All candidates have confirmed their attendance. Join the conversation from 7.15pm on Wednesday, August 28, using the hashtags #Bowmanpol and #RedlandCity.

Questions can be sent to the Bayside Bulletin via [email protected] fairfaxmedia.com.au

What a difference a week makes! Democracy is being nudged along by the mainstream and social media in communion.

Participate, Redlanders, I exhort you! Unlike daylight saving, democracy will never fade your curtains.