Trust, it’s not just about ‘them’: Forde wrap by @StephanieDale22 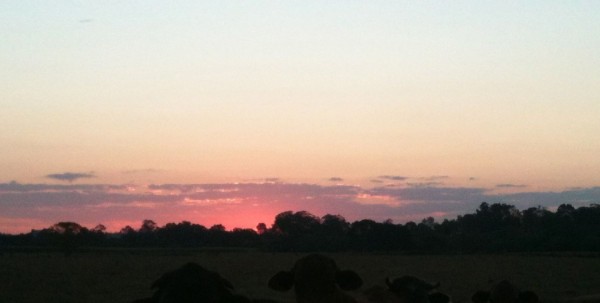 I have two published books available - the novel Hymn for the Wounded Man and the travel memoir My Pilgrim's Heart, which was reviewed recently by the Huffington Post.
[clear]

The other day a smart, savvy, engaged woman I know told me she plans to vote informal on September 7 – her decision has as much to do with media coverage as it does with politics.

In short: ” Can’t bring myself to vote for Tony Abbott, can’t forgive Kevin Rudd his asylum seeker policy, none of the small parties have grabbed my attention, underwhelmed by reporting of the campaign.”

Here in Forde, the Inane Question of the Campaign Award goes to one of the young TV reporters down from Brisbane to interview the Federal Health Minister, Tanya Plibersek.

“Kevin Rudd said he has a beer every half hour on the campaign – as health minister would you advise this?”

The federal health minister is in your face in an electorate of high disadvantage and the only question you have relates to a throwaway line that in any right-thinking world may have made a humorous post-election mash-up – yet in 2013 is headline news?

Buried in one of my No Fibs stories is the answer to a question the mainstream media have been asking one of the candidates since the election was announced. It is buried not because I am hiding it, and not because I’m being contrary.

It is buried because that is where it belongs in the context of the interview. It is not the news. It is not something that impacts on anything at all other than the candidate’s own life. It was information that was offered to me as a small stitch in a conversational tapestry. To drag it out of its context and make it ‘the news’ would be a ‘gotcha’ moment, the kind that distorts comment, betrays trust and is the foundation stone of the toxic dance between politics and media in 2013.

It is a primary reason why our political representatives are cautious, wary and disinclined to talk straight.

That and the fact we the people are inclined to snatch small inanities from the media tree and swing them high in a merciless wind, baying for blood.

And there we have the third limb of the current cynical climate of disenchantment, disillusion, dissatisfaction and despair: politics, media – public.

Political and media powerbrokers have a lot to answer for – but so too do we the people.

A while ago I was propelled to start The STFU Movement, based on a single premise: if you don’t know what you’re talking about, shut the fuck up.

Take climate change, just as one small example. Rewind to that dreadful 3-year assault on the carbon tax by the opposition leader, Tony Abbott. That offensive resulted in an abominable, abusive, violent public campaign to oust a prime minister and ‘destroy’ (his word) a legitimate parliament.

It triggered ugly protests and hate and ill-informed public comment that to this day is publicly parroted by voters. It lowered the benchmark for acceptable language in our parliament, showcased for all the world a generally good-hearted nation’s inert misogyny and heralded a standard of public discourse that still makes me sick to my stomach. In short, the gloves were – are – off.

And it looks like we’re about to reward this man with the prime ministership. But that is an aside . . . or is it?

STFU – are you a climate scientist? a climate economist? who among the experts have you studied to make up for your information gap? are you informed in any way, shape or form about a complex matter that requires immediate attention?

No? Then shut the fuck up. Clear the airwaves for those who know something about the debate. Shut our witless mouths and don’t speak – listen.

Listen to those who know more. Discern the motives of a bitter loser. Listen to the options available to our parliament. Listen to the outcomes of their debate. Ask questions. Comment if you have something to contribute. Argue if you like. Ask more questions. And listen.

In this way, instead of watered down policy designed to appease our collective ignorance and/or animosity and/or hate – we might just get best practice, and elected political representatives who are willing to take their chances on long-term policy initiatives and genuine public discourse.

Hell, they might even be willing to disclose to us their true hopes (‘yes, I do hope to lead this great nation one day’) – and their fears (‘yes, there is a risk that x, y or z may happen if we go down this path – but here is why we believe it’s in our best interests’).

Imagine that, the full picture.

This is the reason there have been no vox pops in No Fibs’ Forde election coverage.

Why would I ask the man and woman on the street one short question and allow their comment to lead my story and thereby influence public opinion?

This is not to question the legitimacy of their opinion.

Just that, in the absence of rigorously testing their response by asking further questions, examining their motives, questioning their qualifications to comment, their remarks are best left where they belong – in the pub. Or, in the modern world, on Facebook (back to STFU).

How often have we heard in this campaign and in recent years ‘they don’t listen to us’?

Reality check: they do.

They listen to our incessant ignorant bleating, they pay attention to our infantile, selfish desires, they bribe us shamelessly to appease our small-minded short-term avarice. Consequently – and unsurprisingly – good policy is watered down to please ill-informed public opinion.

5. moving the Garden Island naval base from Sydney to politically expedient Brisbane

3. a Minister for Cities

Another friend, a woman in Perth, emailed me recently:

“I have looked in vain for more info about my local candidates. In the AEC guide to Cowan, a safe Liberal seat, one candidate has a shadow profile because he hasn’t even submitted a photo of himself. So, almost no letterboxing, no doorknocking, no presence at local shopping centres, nothing useful on websites – and I’m supposed to pick one to vote for?

“I’ve been reading more widely through the No Fibs site and was a little sorry that I hadn’t known about it before and put my hand up to write something. (Though that, of course, would have entailed my getting a Twitter account :) which would have recast my universe.)”

Here in Forde, a seat traditionally held by the government of the day until sitting member Bert van Manen turned the tide and held it for the Liberal Party in 2010, 10 candidates have raised courageous democratic hands to compete for a seat in the 44th Australian Federal Parliament. Just three years ago, in 2010, there were four.

At least nine of those 10 candidates have the following in common (I never did find Rise Up Australia’s Jonathan Jennings): they are well-intentioned, they are concerned about jobs, health, infrastructure and education and they are community- and/or nation-minded (Citizen Electoral Council candidate Jan Pukallus and Voice Australia candidate Keith Douglas are focussed on the national agenda).

Only one put the environment at the centre of her campaign in what is one of the nation’s most biodiverse regions, The Greens’ Sally Spain (naturally).

At least seven of the candidates are banking on electoral disillusionment with the two major parties, and a surprising number of those seven truly believe they are in with a chance (in particular 2013’s youngest candidate independent Joshua Sloss and Katter United Party’s Paul Hunter); three of the candidates have no previous political campaign experience (Hunter, Sloss and Brewster).

Ultimately, Forde is a classic contest between the two major parties, Labor vs Liberal: former Queensland Premier Peter Beattie, who stunned political pundits around the nation when he emerged from political retirement to take a surprise shot at Canberra, and sitting member Bert van Manen.

It should have been a tighter contest. But with polling day less than 36 hours away, it looks like the odds are with van Manen. The best Beattie can hope for, in an electorate that according to the ABC’s Vote Compass is one of Australia’s top 10 conservative divisions, is a nailbiter.

The pivotal campaign platform for all non major party Forde candidates is they will ‘represent the views the people’.

Noble sentiment this may be, but in reality this mantra is at best naive and at worst cowardly – because here we reach the juncture of the notion that the sole and absolute role of democratically elected political representatives is to ‘represent the views of the electorate’.

There is a difference between being a delegate and being a representative. And there is a reason we have representatives in our parliament rather than delegates.

Tony Windsor could tell you what that difference is.

In the Australian Federal Parliament you are representing the interests of your electorate – whether or not they voted for you. Those views are unlikely to be 100{17ac88c265afb328fa89088ab635a2a63864fdefdd7caa0964376053e8ea14b3} in accord. As well, in balance or counter-balance, you are responsible for the well-being and future directions of an entire nation.

To wit, this nation’s asylum seeker policy – held to ransom by less than a handful of marginal seats in western Sydney.

And a fine example of the realities of what it might mean to ‘represent the views of the electorate’, for herein lies the case for leadership in the Australian Federal Parliament – leadership that may cause you anxiety at home as you struggle to put your case before your electorate. And that is as it should be.

Despite current popular opinion, there is also a case for large blocks of the two major parties to take their seats in the parliament – because they have 100+ years’ experience in transforming ideology and vision into practical, workable policies. Government by ideology and inexperience is a nightmare – just ask the good folk of Byron Bay, who endured the world’s first popularly elected Greens mayor and a majority-rule local council weighted with novice Greens representatives.

Like 2013 Forde candidates Joshua Sloss and Amanda Best, I found the recent hung parliament inspiring. Not least because it was a taste of things to come. Yes it was exhausting, yes it was at times dis-spiriting – it also delivered some of the most outstanding legislation/policy work seen in a decade or more (particularly the NDIS, the abolition of private health subsidies, Gonski and tobacco plain packaging).

Healthy democracy demands that we negotiate – and the 43rd parliament, but for the resounding display of wrecking ball loser-ship flaunted by the Leader of the Opposition, was a practice run for a future in which more independents and small party representatives will take their seats in the House of Representatives.

Diversity is vital to strong, modern governance for Australia – yet there is still a robust and convincing place for the major parties in the House.

Labor, Liberal, National and even The Greens party powerbrokers have a serious case to answer in putting self-interest and popularity ahead of the people they claim to represent and the nation they serve.

So too do we the people.

This election has been about trust. About ‘them’ earning ‘our’ trust.

Perhaps, if we are to strengthen as individuals and mature as a nation, it is we who must also earn their trust.