Undecided voters – who are they and what are they waiting for? 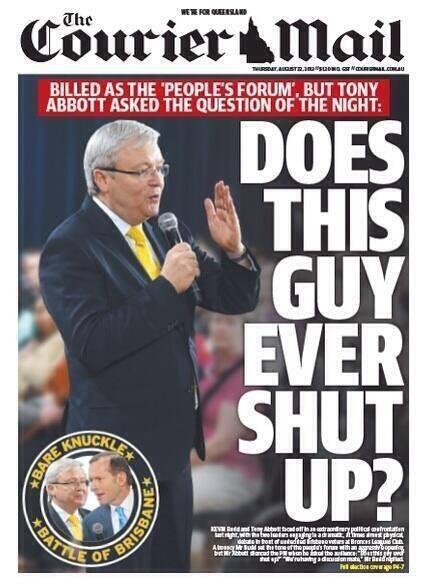 There was a debate last night between Prime Minister Kevin Rudd and Opposition Leader Tony Abbott in front of 100 supposedly undecided voters. Abbott was declared the winner, based on the votes of these people. The count was 37 in favour of Abbott, 35 for Rudd, and 33 undecided. The fact this adds up to more than 100 is an anomaly in itself.

The most memorable moment of the debate, however, was Abbott’s comment that made the front page of News Ltd’s Courier Mail: ‘Does this guy ever shut up?’

What? I still can’t quite believe someone could say this in a debate, when talking and articulating your ideas requires the opposite of shutting up. Journalists started analysing the impact of the moment.  Was it planned? Would it benefit Abbott? Would it benefit Rudd? How will the undecided voters respond? Heck, I’m surprised someone didn’t think to ask the man or woman on the street of western Sydney for their thoughts on it, since that is the centre of the universe for this election. Actually, I haven’t looked closely, so perhaps someone did. Nothing in this campaign really surprises me any more.

I’ve never been a so-called swinging voter. That doesn’t mean I have always voted for a major party. I understand how preferences work and know that even if I support a minor party or independent the key vote on my ballot is whether the ALP or Coalition candidate is higher. (Seeing independents and minor party representation in the House of Representatives is encouraging, but rare. I personally think it is great for democracy but it requires massive momentum and campaigning to achieve. More than 95 per cent of our House of Representatives MPs have been from the major parties, with the distinction between Liberal and National party being slim since they sit as a Coalition.)

My electorate of Corangamite has 12 candidates in this election. Short of some huge catastrophe in the final weeks of the campaign, either Labor’s Darren Cheeseman or  Liberal Sarah Henderson will represent us after September 7.  So, even if I numbered 1 through 10 on my ballot for all of the other candidates, my vote would depend ultimately on whether I put Darren or Sarah at number 11. 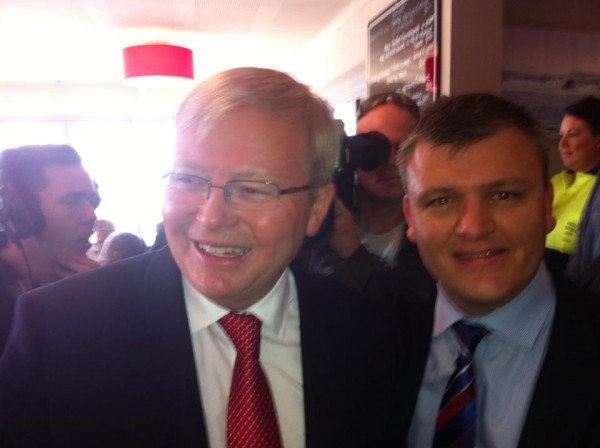 I know people don’t understand this. I’ve talked to a lot of people since starting this citizen journalism project, people who are well educated and tuned into the election. One person told me she didn’t want Abbott to be prime minister, but she doesn’t like Darren Cheeseman, so she would put the Greens candidate first, someone else second and Sarah Henderson third.  I told her that her vote would go toward electing Sarah Henderson and ultimately contribute to Tony Abbott becoming prime minister. I still don’t think she believes me. This link is helpful to explain preferential voting

I’ve been fairly engaged with politics over the past several years. I’ve watched live (unedited) press conferences here and there, even seen snippets of question time. I tweet about politics, despite carefully avoiding making any partisan commentary on my Twitter account for the first year or so.  That’s changed. I realised I had an online voice, so I started to use it on a wider range of topics. My family and friends know I’m interested in politics ,but if I were to start discussing it their eyes would glaze over. I consider it a personal interest. Writing about it has been a recent activity for me, and even doing that feels like I am putting a piece of myself out there that those closest to me don’t often see.

I have a couple of hundred friends on Facebook, including family, friends, childhood friends, school friends, work colleagues, parents of my kids’ friends, people I have known forever and people I have met quite recently. I try not to get political on Facebook because I know it is something I am interested in but a large percentage of people are not, and secondly, I don’t want people who don’t know each other, but are connected through me, having fights over my status updates. I try to keep Facebook light and friendly. But, with this project, I realised I had a fairly good cross-section of people to survey. It’s not scientific, but I think it gives a reasonable representation of Australian people. Just this week I asked “Don’t tell me who, but have you decided who you are voting for or are you still undecided?”

As it turns out, about 15 per cent of those who replied indicated they were still deciding. So, I watch things like the debate, with its ‘shut up’ moment, the ads with their positive and/or negative spin, the news with snippets from both major parties critiquing the other’s plans, querying the cost, telling each other to “man up’”(sigh) and basically saying, “My ideas are better than yours, ner ner”.  And I think, what are these undecided voters waiting for and what will decide it for them?

One person replied with words to the effect of “a pox on both their houses”; in other words, neither side was worthy of her vote. I actually think such people should vote small party or independent. If you are so upset with Liberal and Labor you need to give your number 1 vote to a non-major and favour one of the majors with your preference. This is a way of sending a message about your frustration.  In the meantime I guess some undecideds will see something in the next two weeks that will make them go “You get my vote” or “You just lost my vote”. Maybe they’ll walk into the polling booth and toss a coin or perhaps, as it is being reported so extensively, they’ll decide one candidate saying ‘shut up’ is good, bad or otherwise, and vote based on that!  In a perfect world they’ll study the policy issues that concern them most and determine which party can deliver on those policies for the betterment of their country.