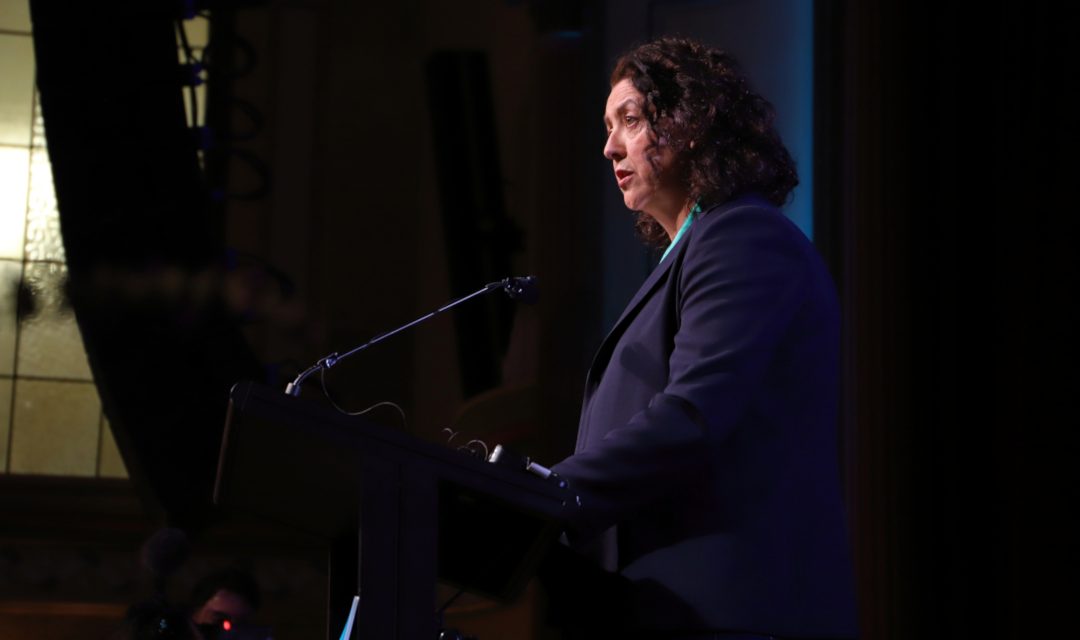 WITH THE SCENT of coffee in the air and The Triffids’ ‘Wide Open Road’ on the campaign playlist at the Hawthorn Arts Centre on Saturday, Voices of Kooyong launched the campaign for their candidate Dr Monique Ryan to unseat Treasurer Josh Frydenberg.

Yes, it seems the Voices independent candidate for Kooyong will have a campaign playlist. There’s going to be tunes.

Kooyong is a blue-ribbon Liberal heartland. It was the seat of party founder and former Prime Minister Sir Robert Menzies. During the morning speeches, it was said he held campaign events at the very same venue.

Ryan, a paediatric neurologist, expressed an underlying theme in her speech that was similar to the recent launch of Zoe Daniel’s campaign in Goldstein: the Liberal Party no longer represents these electorates.

“The Liberal Party has lost its way,” Ryan said at one point.

To me, The Triffids’ ‘Wide Open Road’ is about accepting change, the loss that sometimes comes with it, and moving on. If the song and its lyrics evoke similar emotions in others, it’s probably a very good choice.

Before Ryan addressed the gathering (watch her speech in the video below), earlier speakers competed with the sound of a coffee machine making lattes: “There are so many people in Kooyong, in the wine bars and cafes of Kooyong, to quote the PM’s phrase, who want more from their federal MPs,” one of them said, referencing Morrison’s jibe about how net zero won’t be achieved “in the cafes, dinner parties and wine bars of our inner cities.”

In June this year, Barnaby Joyce said of the Covid outbreak in Victoria that rural Australians “couldn’t really give a shit” about Melbourne.

You can almost smell the burning flesh from here

Prior to Ryan, another speaker made a similar comment, and if the crowd reaction is a guide there’s very strong resentment about the treatment of Victoria by the Morrison Government during the pandemic. People seemed especially aggrieved by Frydenberg’s role.

Climate and integrity, like all the Voices campaigns, are major issues; but it would be a mistake for the Liberals to treat these campaigns as one entity, or as single-issue campaigns.

A range of issues drew strong reactions from Ryan’s supporters, one of the strongest being mental health and aged care.

After the official launch, supporters walked a few hundred metres to a local park for the launch after party.

Ryan’s dog Alfie joined the ‘Dogs of Independents Day’ and as you probably heard in the video above, he had quite a bit to say during the speeches.

The federal seat of Goldstein is named in honour of Vida Goldstein, and her legacy loomed large at Zoe Daniel’s campaign launch in that electorate, recognising Goldstein’s pioneering role in womens’ equality.

What I didn’t know until doing some footwork on Saturday is that in 1912, Goldstein announced her candidacy for the seat of Kooyong at the 1913 election.

I tried to confirm Goldstein was on the ballot using the National Library of Australia website. I came up empty, maybe due to my poor skills.

The Australian Electoral Commission’s (AEC) function is to maintain an impartial and independent electoral system… targeted education and public awareness progress. While in times past it may have been common for government agencies such as the AEC to have resourcing which could support historical research or information requests, such as a library, this is no longer the case.

Friday 17 May 1912. “Protection of the persons as well as the property of the young” = raising the age of consent, which at the time was 14. Women are still fighting for body sovereignty.

Similar to the former Member for Indi Cathy McGowan, Ryan doesn’t have a huge public profile but her professional life means she’s not entirely unknown. Critically, she has deep social ties in the electorate.

The spiritual home of the Liberal Party is facing an uprising by a local community that appears to have had a gutful. Frydenberg should be extremely concerned.

On Monday, the Member for Goldstein Tim Wilson wrote in The Age: “Liberals should welcome the independents because they’re about to inflict electoral pain on Labor and the Greens.”

Why would Wilson be concerned his political opponents are about to be eaten by a big teal monster?

Excuse the scepticism, but if you are going to astroturf by confecting a community campaign, try to mix it up.

Did the loss of Indi and Warringah teach the Liberals nothing? Astroturf has no roots and you can’t bullshit to community about community.

This is a people-powered community coalition of the willing