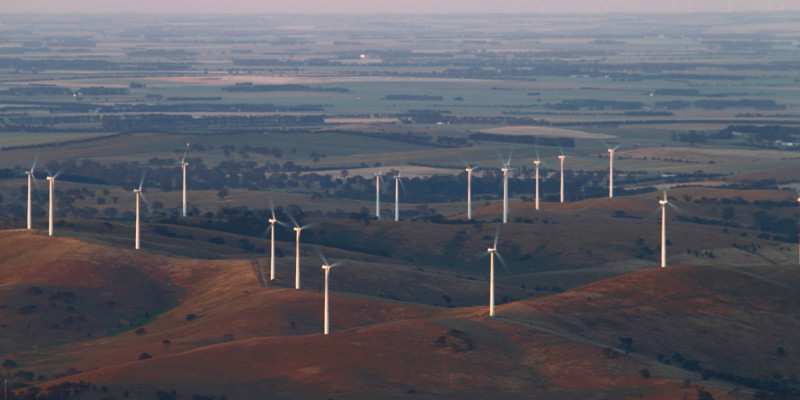 On Thursday Victorian Energy Minister Lily D’Ambrosio told the Federal Government that Victoria wants to establish it’s own Victorian Renewable Energy Target (VRET) and to get out of the way and clear the federal legislative path to do so.

“The Federal Government must move out of Victoria’s way and change the law. Our state needs a proper renewable energy target, to support the industry and reduce pollution.” said Lily D’Ambrosio.

The move was welcomed by environment and climate groups. “The Abbott government is playing politics over the fate of the Renewable Energy Target (RET). Its actions have seen investment collapse by 90 per cent and 2,500 job losses,” says Leigh Ewbank, Friends of the Earth’s renewable energy spokesperson in a media release. “The Andrews government’s commitment to reinstate a Victorian Renewable Energy Target (VRET) must be welcomed by anyone who supports job creation, investment in Australia, and action on climate change.”

Great letter in @theage today. #Anglesea coal highlights why the #VRET is a no brainer given the flat footed Fed Govt pic.twitter.com/PWe9rjwbfC

The clean energy industry in Victoria currently supports over 4000 jobs. If the barriers to a Victorian Renewable Energy Target (VRET) were lifted, there is the likelihood of major investments proceeding in regional towns of Ballarat, Ararat, Warnambool and Port Fairy.

According to Ms D’Ambrosio there are 19 Victorian wind farms worth about $5 billion with approval ready to be commissioned. These projects would create some 2638 jobs during construction and operation stages, most in regional areas.

Victoria is also facing job losses as the automotive manufacturing industry closes down over the next two years. Renewable projects could provide much needed work and also sustain some of the small auto focussed manufacturing businesses to retool to be part of the renewables sector.

This move to re-establish a VRET comes after the draconian wind farm planning regulations introduced by the Baillieu Government were relaxed in March, with right of veto reduced from 2 kilometres to one kilometre from a wind turbine.

“We said we would restart the industry by encouraging community wind farms and today we’re keeping our word.” said Minister for Planning, Richard Wynne.

The Government also announced at the time the development of a Victorian Renewable Energy Action Plan, to outline how to get Victoria’s renewables sector investment back on track.

“The previous Government destroyed the industry and we have already started picking up the pieces. Our $200 million Future Industries Fund will work with the renewable energy sector to create jobs and investment.” said Lily D’Ambrosio.

Measures by the Andrews government have also been flagged to stop electricity retailers in Victoria from discriminating against rooftop solar customers. Retail and Transmission companies will be encouraged to embrace distributed generation as part of their business models, said D’Ambrosio at the Australian Solar and Energy Storage conference in Melbourne on Wednesday.

D’Ambrosio outlined her vision at the conference, that was described by Sophie Vorath from RenewEconomy as “of a forward-looking energy sector, underpinned by renewables and key supporting technologies – particularly battery storage – that would combine with energy efficiency and reduce the cost of electricity to all customers.”

Indeed, I reported on the Tesla Energy battery technology launch recently. The Powerpack for utilities product will be of far greater industry importance than their residential product, in adding extra reliability and network smoothing at reasonable cost in a more efficient, decentralised and distributed electricity network. Coal is being edged out by increasing renewable technology efficiency and pricing combined with advances in battery technology and pricing.

Despite the general renewable investment freeze caused by the Abbott Government wanting to slash the RET after the review by sceptic businessman Dick Warburton, not all investment has dried up.

In February two Victorian wind farm projects were given a lifeline to proceed. That lifeline was thrown by the ACT government reverse auction and utility feed-in tariff system. In 2013 the ACT set a 90 per cent by 2020 renewables goal to help it meet it’s ambitious emissions reduction target of 40 per cent below 1990 levels by 2020.

In the latest auction round, two of the contracts for a 20 year supply feed-in tariff were awarded to Windlab Systems for a 19.4 MW wind farm at Bendigo and RES for the 230MW Ararat wind farm.

The media release by RES specifically detailed that the Warburton Review caused major disruption to development. “The Federal Government’s review of the Renewable Energy Target meant plans to progress the project into construction during 2013/2014 were put on hold.”

The Coonooer Bridge Wind Farm near Bendigo, managed by Windlab Systems, secured funding and announced the go ahead for the project on 28th April. Most of the investment for the $50 million project will come from Eurus Energy Holdings Corporation of Japan who will receive about 80 per cent project equity. The Farming community around the wind farm are also included as part of the ownership structure.

As a Victorian it seems strange that it is the ambitious policies of the ACT government that resulted in two Victorian wind farms being developed. If the Federal Government is dirty minded and refuses to budge on changing the restrictions with regard to a VRET, it may take some innovative policy dimensions to boost renewables investment such as the ACT system of a state feed-in tariff and reverse auction.

So what is happening with the Federal Renewable Energy Target? The Clean Energy Council initially succumbed to a compromise deal and the Labor Opposition backed that compromise. The final deal would see the RET reduced from 41,000GWh, about a 27 per cent target, to 33,000GWh or about 23 per cent target.

But the Government also included two nasty provisions: inclusion of the burning of native timber in the scheme and two-yearly reviews of the target which would continue a high degree of investment uncertainty. The next review is set for 2015, just 7 months away.

Frances Pike at Independent Australia has an excellent overview article on inclusion of biomass in the RET (The burning controversy of the RET review: Australian forest destruction) which would increase climate emissions, escalate forest destruction and nudge out true low emission renewables like wind and solar.

Labor’s Opposition spokesperson on the Environment, Mark Butler, said Labor would refuse to support inclusion of native wood biomass under the RET, “I’m very confident there’s no way Labor will support an inclusion of the burning of native wood waste. At the end of the day, the Government will have to decide whether that is a deal breaker.”

Butler also outlined opposition to two year reviews, “This deal cannot proceed unless government drops the reckless idea of re-establishing two-year reviews….Investors will not put money on the table if they think that the whole scheme is going to be reviewed next year,” Butler said.

One of the impacts of this deal is that a reduced RET will enforce a bias towards wind over solar projects. There are probably enough wind projects near enough to shovel ready to use up the remaining lower target of 33,000GWh, but will prevent utility scale solar projects a chance to utilise the scheme.

The Federal Liberal Government is placing as many obstacles as possible for large scale energy transition. This keeps the profits flowing into the large coal fired power generators and some of the largest carbon polluters in Australia, such as EnergyAustralia, AGL Energy, Origin Energy, Stanwell Corporation, GDF Suez Australian Energy, and CS Energy (See ACF Report).

But as Lily D’Ambrosio said at the Australian Solar and Energy Storage conference in Melbourne on Wednesday, “Renewable energy is an unstoppable train – it’s not going away. That’s something that all (energy industry) stakeholders should be encouraged to consider.”