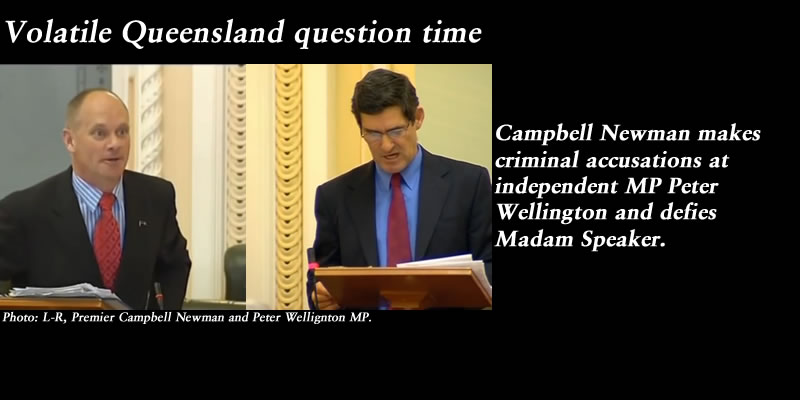 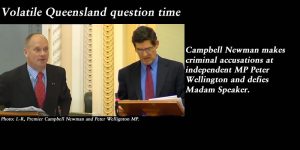 On Tuesday, Premier Campbell Newman used Queensland question time to make accusations of criminality at the independent MP for Nicklin, Peter Wellington. What started as a straightforward question on overseas visitors committing offences, turned into a furore as the firebrand politician reacted vehemently to Newman’s allegation of supporting criminal motorcycle gangs.

Wellington has long been an opponent and critic of the government’s Vicious Lawless Association Disestablishment Act 2013 (VLAD) which has been used to combat bikie gangs. Wellington raised the ire of the Newman Government when he spoke against the laws on the steps of the Maroochydore courthouse in relation to the so called ‘Yandina 5’. Five of his constituents were alleged to be bikies and were arrested after being recorded on security camera gathering at a Yandina pub for drinks, later placed in solitary confinement.

During question time, the Speaker repeatedly asked Newman to unconditionally withdraw his accusations against Wellington in question time. Amid a booming challenge from Wellington for a more public debate, Newman reluctantly stood and finally issued an unconditional withdrawal.

In July, 2014, fresh from defeat at the Stafford byelection, Newman apoligised to Queensland for upsetting people with decisions that had been made over the years. He pledged to be less combative and listen more.

Below is an extract from Hansard of the encounter. The full transcript of the day’s events can be found here.