Wake up. Roll over. Realise this could be the last morning before Tony Abbott becomes PM 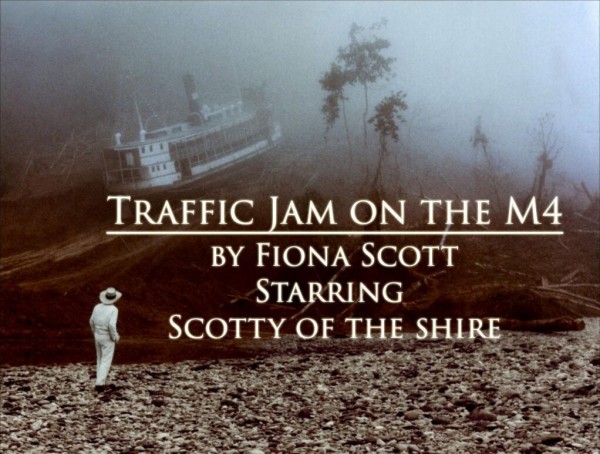 Savour the moment, but only fleetingly – the incumbent PM is not exactly shaking the sauce bottle. Momentarily think about sex appeal. Come properly awake with a flurry of gag reflexes.

Turn on the remnants of ABC Rage, but suddenly have painful flashback to last week and Julie Bishop’s music choices.  Realise Beyonce’s Single Ladies and Madonna’s Like a Virgin will now forever be associated with the deputy Liberal leader in my brain.

Try not think about Julian Assange’s foray into John Farnham karaoke– you don’t want to let that image or song or mullet get stuck in your head. The Voice from the Ecuadorian Embassy. The Senate via skype.

Stumble down road to local cafe and try not to trip over a sea of bikes. Avoid ALL men in lycra. Wonder again about my lifelong campaign to ban all men wearing it, and how that might be all the more trickier from tomorrow.

Walk through a leafier part of Flemington, aka the “doctors’ wives’ patch”, and note the Adam Bandt signs adorning splendid Victorian mansions with big bastard shiny 4WDs parked outside.

Arrive at café. Wonder if it’s too early to order alcohol. It is. Remind self I left Queensland a loooooong time ago – a distant memory of a time before Peter Beattie became Queensland’s premier, before he found an extraordinary knack for separating himself from his own government, promising to fix things his government had done.

Wonder why Kevin Rudd didn’t try repeating the swimming-in-the-shark-tank campaign launch that Beattie dared many moons ago, before tipping his hat at the seat of Forde. Figure the Labor Party’s internal feeding frenzy of the past few years, led by Rudd and his supporters, would probably make the sharks blush and scare them away.

Marvel at how Brisbane used to be considered a big country town – and not the other epicentre of federal politics (outside of Rooty Hill).

Check out menu and order coffee. Note that despite the local Muslim population, there’s no “haram” to be found at any café in the neighbourhood.

Flick through the papers. Wonder again how big and influential an effect Rupert Murdoch and the News Limited papers will have on the campaign, with back to back endorsements for Team Abbott.

Pay, but not before having an argument about final costings and a possible black hole in my wallet.

Walk past the gigantic billboards of Adam Bandt, casting shadows all across the seat of Melbourne. Realise I’m standing underneath a really massive billboard of Adam Bandt “Standing up for what matters”. Wonder about the Greens’ Leadbeater possum policy. Again.

Realise it’s Threatened Species Day. Seriously, am not making this up(!).

Notice a disproportionate amount of fathers out with their daughters. Chuckle at Karen Pickering’s tweet about the need to “FREE” Tony Abbott’s daughters. Throw Jessica Rudd in for good measure.

Try and imagine a female candidate with her arms around her adult sons saying we should vote for her because her sons are hot. Shiver again, wondering how the term ‘Dad moment’ or ‘Dad joke’ is just an excuse for outdated sexist commentary. Or as ABC Political writer Annabel Crabb observed during the campaign:

“Daughters, in this campaign, are an implicit piece of propaganda; a useful item of human armoury for the misogyny war’s remaining skirmishes. But they also provide convincing cover for the “dad moment”, which is modern man’s catch-all excuse for occasionally forgetting himself. What is the female equivalent of the “dad moment”? Surely not the “mum moment”, which would probably involve just dropping everybody to footy practice while making a work call and constructing a rabbit costume out of toilet rolls and tissue paper.”

Notice a lot of traffic on the way to polling booth. Blame the boat people. And Fiona Scott. Concede that saying dumb stuff about asylum seekers sure has had “sex appeal” this election.

Walk past Arthur Calwell’s old house along the way. Think of this once safe Labor seat now overrun by giant billboards of Adam Bandt and people wearing “I’m with Adam” t-shirts. Think that in 2013, the choice comes down to Adam Everywhere from a progressive party, versus a progressive woman from a major political party.

Think about the PNG “solution” (and abuse of the word “solution” in regard to any asylum seeker policy) and momentarily dream about having more progressive members in parliament. Full stop. Or just good, plain-speaking, considerate, reasonable people as members of parliament. Nod to Tony Windsor. Sigh.

Walk past the big church on the hill with the foundation stone laid by Archbishop Mannix. Think of Mannix protégé B.A. Santamaria, as one of Abbott’s ‘mentors’. Recall comment from Abbott daughter many years ago about her dad being just a ‘lame, churchy, gay loser’. Figure whoever wins we’ll be left with a ‘churchy loser’, although Rudd has recently ‘evolved’ his thinking on gay marriage (and provided one of the few inspiring moments during the campaign when responding to the issue on last Monday’s ABC QandA program). Wonder whether Tony Abbott’s sister secretly wants a Rudd victory to speed up her own nuptials.

Arrive at polling booth. Notice more people than normal queuing. Blame the boatpeople. Oh, that’s right, they’re not allowed to vote; they’re not really allowed to do anything these days – even seek asylum! And under an Abbott government they’ll be denied legal rights. Think it’s twelve years since a prime minister thundered the words “We will decide who comes here and under what circumstances.” For both major parties it’s now “We will decide no one will come here. Ever.” Weep.

Think about Abbott’s hare-brained “Buy the Boats” scheme. Wonder whether rusty boats will spoil the view in Sydney Harbour – Abbott might need to adopt Rudd’s equally hare-brained ‘move the navy’ (and everything else) to Queensland to accommodate a fleet of leaky vessels. Shake head at the crazy debates and policies dished out during this campaign that will never see the light of day. Wonder if Abbott’s paid parental leave scheme will also be in that category. Sigh. Let out a dirty ‘F***’.

Channel Tony Abbott when recording your name to the electoral roll with some long “ummmmm, ummmmmm, ahhhhhhhhhhummmmm’s” followed by a good awkward lick lip. Try not to get arrested – the Flemington Police station is just down the road.

When they ask for your address, give them your best Julie Bishop stare.

Grab forms for the two houses and hit the cardboard cupboard. Take a selfie, if not illegal. Wonder if Kevin Rudd stopped taking so many of them and actually called NSW Premier Barry O’Farrell about that small matter of moving the navy to Queensland.

Fill the Reps form in. Feel tempted to draw a box on the end and write “Julia Gillard, but that would be, ahem, an abuse of my voting power. Think of Gillard and the Joni Mitchell song Big Yellow Taxi: “Don’t it always seem to go, that you don’t know what you’ve got till it’s gone?” Sigh. Sigh, sigh, sigh.

Notice an extraordinary number of crazy-slash-loopy parties on the Senate form. Begin the hour-long task of voting “below the line“, working backwards, putting the absolute nut jobs last.

Wonder if Jayme Diaz has ever voted below the line (or whether he just put the same number in every box). Think about the voters in New South Wales and hope they are also voting below the line and that some crazy preference deal doesn’t return Pauline Hanson to our national stage, let alone have a hand in the balance of power.  Or anyone from the Katter or Palmer parties. Please, no.

Emerge from a sweat, three hours later. Fold the gigantic Senate form – almost as big as an Adam Bandt billboard – into a tiny bundle just because it will ‘surprise’ the vote counters. Especially when they see I’ve voted below the line.

Return home, but before date night with Anthony Green, stop off at the bottle shop. A state of no-return inebriation is recommended for tonight’s viewing, bar a few “happier” moments of watching Sophie Mirabella sweat.

Cancel all commitments on Sunday. This one is going to hurt.