We need to talk about Pauline: @burgewords comments on #PaulineHanson 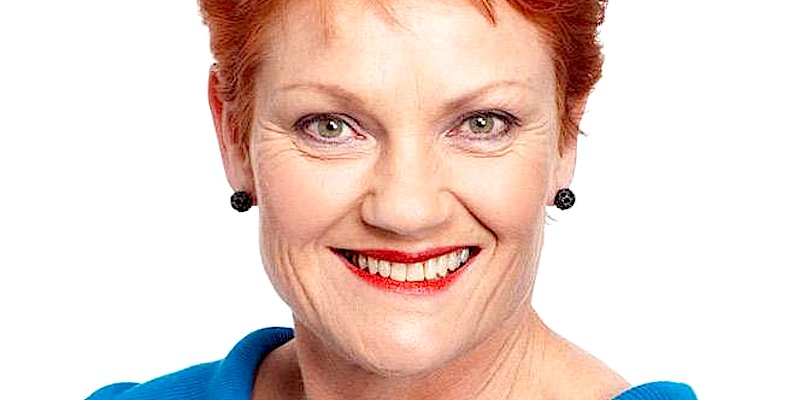 WITH no result on election night, it wasn’t too surprising when people came up to our market stall at Cleveland in South East Queensland on Sunday morning asking who’d won. We weren’t selling anything, but petitioning voters in the federal electorate of Bowman about marriage equality. Recognising the rainbow flag and the symbol of national lobby group Australian Marriage Equality, many assumed we were a good bet to talk politics.

I did an eye roll after I mentioned to a punter that one thing was sure: Pauline Hanson had been elected to a Queensland Senate spot. This shopper jumped in with a couple of perceived positives about Pauline. “Not many people really take the time to find these things out,” she said. A bit chastened, I back-pedalled behind my concerns about how Hanson will vote on marriage equality.

But it bugged me. The petition I have been championing since April across the region I’ve lived in for almost four years has led me to feel I have a place in this community, whereas my sudden education about Pauline Hanson’s popularity reminded me with a thud that the place I am living is Queensland, One Nation’s spiritual home. 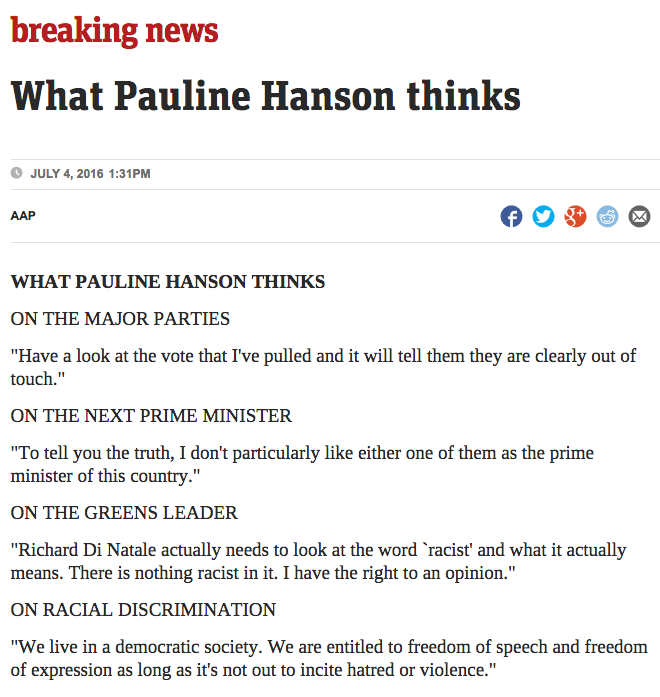 With nothing new to report on vote counting, the media flocked to Pauline Hanson’s press conference on Monday. Twitter exploded. The mainstream media followed. News Corp’s was the first lead story I saw, with the headline: “What Pauline Hanson thinks”.

As a former sub-editor, I thought it was either a lazy header or one dripping with irony. The story behind it proved to be no story at all, just a list of direct quotes from Hanson’s presser (sourced from Australian Associated Press) interspersed with capitalised sub-headings. The only journalistic intervention was filtering out the clearest quotes from the Hanson press conference and packaging them in easy-to-consume bites.

I scanned through the list to find meaning. It was in the last two lines: “ON MEDIA TREATMENT ‘Don’t take me out of context what I’m saying here at all’.”

Irony, then. One way to capture Pauline, unfiltered.

Not quite believing what I was reading, I sought a recent precedent for what I saw as a dumbed-down approach to reporting Hanson. Buzzfeed wasn’t as stripped-back as NewsCorp, but in late 2015 it ran with what looks like dialogue in a screenplay when seeking more information on James Ashby’s role on Hanson’s staff. Their reason: Hanson Redux is big on the legal threats.

No Fibs’ editor-in-chief Margo Kingston took to Twitter Monday afternoon with her eyewitness accounts of Hanson from the late 1990s:-

Instead of Greens leader saying Hanson a racist a bigot his job to expel her, how about “I look forward to discussing her views with her?”

She also linked One Nation to the growing popularity of offshore processing of asylum seekers:-

Margo followed this up with an opinion piece in The Guardian – her debut on that news source – in which she appealed to Australians to “have the conversation” with Pauline.

Sneering put downs, nasty labels and suggestions she has no right to be in parliament are utterly counterproductive and will, like last time, increase her support.

Despite Margo’s experience in the Hanson space (she wrote the definitive book about Hanson – Off The Rails: The Pauline Hanson Trip) her suggestions garnered Kingston a lambasting on social media. 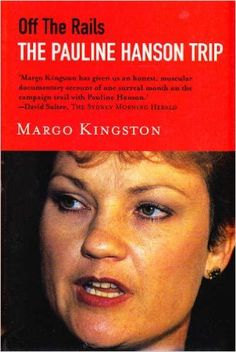 Somewhere between Hanson’s second chance in parliament and Kingston’s experience of the real woman, is there a way to understand what One Nation wants without getting labelled a Hanson apologist or a sneer?

Overnight, a German friend posted Pauline Hanson’s infamous “Please Explain” 60 Minutes video on Facebook, which I had never seen in full. When it was first broadcast I was living in the United Kingdom, unaware, as so many were, that the seeds of Brexit were already growing in the widespread dissatisfaction of the post-Thatcher years.

I watched it Tuesday morning with great interest, Margo’s appeal in my mind, seeking any evidence of commentators or others giving Hanson the chance for a dialogue.

I found it in the last third of the clip (after 22’00”). To her credit, Hanson visited Palm Island in 1996 as the independent Member for Oxley after Charles Perkins (deputy chairperson of the now defunct ATSIC – The Aboriginal and Torres Strait Islander Commission) challenged her to see the region in addition to having such strong opinions about it.

Hanson met a group of Aboriginal and Torres Strait Islander (ATSI) women, perhaps community elders. One addressed Hanson calmly and said: “You are a very young person. You’ve quoted your age as 42, that is still very young. Not so much in age, I’m not talking about years, but knowledge. What I would like you see you do, Pauline, is get educated.”

This was before the international media’s presence at the Sydney Olympics raised Australians’ level of awareness about ATSI language groups. The concept of Aboriginal Knowledge (that which you seek from community Elders) was not widely known enough for the journalist – or Hanson – to realise how uninitiated we all were in the way ATSI communities operate.

Hanson’s immediate reaction was not recorded in that interview, but by the time she was back on the couch answering Tracey Curro’s quite calmly-delivered question about xenophobia, Hanson was not about to admit she was proposing simple solutions to complex problems.

“Where would you suggest they go?” Curro asked, neutrally.

“I’m not saying they up and leave, but they’ve got to accept it, that they are away from mainstream Australia,” Hanson relied.

For many progressives, that’s the end of the conversation.

In the past two days, I’ve been trying to find a primary source for the positives that the punter at Cleveland used to convince herself that a vote for Pauline Hanson was justified, and I just cannot find one. They’re an urban myth that wouldn’t bear publishing here.

I could have asked her why she voted for Hanson – ‘had the conversation’ with her – but on reflection she was defensive, and so was I. What would I have said if I found her misquoting incomplete half truths? What would she have done if I’d pressed her to come up with proof?

When pressed to give answers in 1996, Pauline Hanson retreated into an old saying about having to be cruel to be kind when it came to Palm Island, and perhaps nothing has changed in two decades.

The divide between ‘ordinary’ and ‘privileged’ Australians observed so effectively in Kath & Kim served as a more palatable way to have the conservation in the wake of One Nation’s demise, but it’s disappeared from our screens in time for Pauline’s return.

Hanson Redux is moving at pace, although it is fluid. On Tuesday’s ABC Radio National morning radio news, One Nation supporters distanced themselves from the racist and anti-Muslim elements of Pauline Hanson’s Monday press conference.

Labelling such differences as hypocrisy isn’t helpful. Like all political parties, One Nation sends mixed messages, and its followers are able to live with policy blind spots, just like other Australians. Labor’s policy match with the Liberal’s on offshore detention of refugees comes to mind.

But I am not so sure about having the conversation.

Perhaps conversations are not on Pauline’s agenda this time? During a hung parliament, do conversations revolve around listening and understanding, or do opposites simply thrash out the horse trading in the pursuit for power, legislation by legislation?

Talk is cheap, and if we were brave enough, we’d admit we just don’t like having conversations with other ideologies. We leave that to those we elect, Pauline Hanson included.

If we cannot live with what the politicians are saying to one another, we do something, like petitioning in public, or creating new political parties… hey, did I just find common ground with One Nation through nothing more than a conversation with myself?

Michael publishes articles about art, life and politics at his blog. Check out the interview Margo gave this week to ABC Radio below.