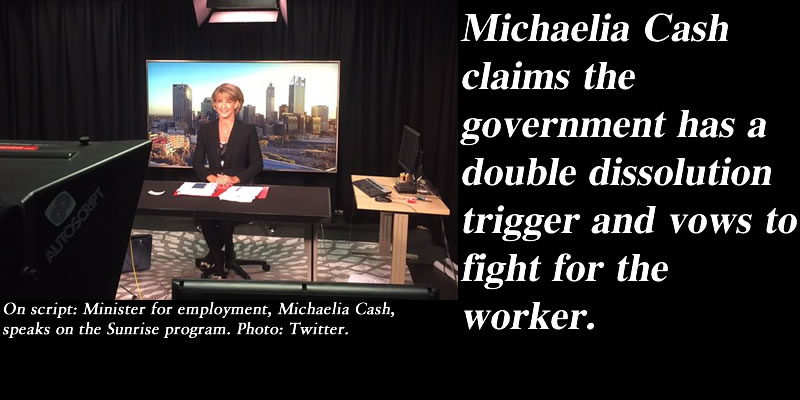 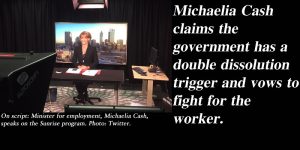 ABC Election Analyst Antony Green confirmed the Turnbull Government does have an election trigger on the issue of the ABCC but the request to the Governor-General would need to be made before May, 2016. . “The government has a valid trigger in the Fair Work (Registered Organisations) Amendment Bill 2014, but any request for a double dissolution on the basis of this legislation must be made by early May 2016,” he wrote.

Federal Minister for Employment, Senator Michaelia Cash, has told the Sunrise program that the Turnbull Government has a trigger for a double dissolution election. A double dissolution would result in the full upper house being dissolved at the same time as the lower house ahead of a federal election.

Cash told presenter, Andrew O’Keefe, that if the government could not get it’s Australian Building and Construction Commission (ABCC) legislation through the Senate, a general vote would be called on the issue.

“The Prime Minister and I announced yesterday that when the Parliament resumes in February we will seek to immediately reintroduce the legislation to re-establish the Australian Building and Construction Commission,” she said.

Prime Minister Malcolm Turnubll also signaled industrial relations as a major election issue for 2016 stating, “We are willing to fight an election on this. If we cannot get the passage of this legislation through the Senate, then in one form or another it will be a major issue at the next election.”

Citing the Royal Commission into Trade Union Governance and Corruption, Cash insisted that the government was acting in the best interest of Australian workers.

“We will fight for the worker. That is what we have always said we would do. That is what our laws are intended to do, and yes, we will make this an election issue,” she said.

“You would know from looking at the report that the construction commission within Australia is just rife with unlawfulness,” she said.

However, in the final report, Commissioner Dyson Heydon stated that the findings do not have any legal ramifications.

In August, 2015, Heydon himself landed in controversy whilst chairing the commission when it was revealed he had agreed to speak at a Liberal Party fundraiser, the annual Sir Garfield Barwick address. Heydon ruled that he had no conflict of interest and that the hearings continued unabated.

Spokesman for the opposition, Shadow Minister for Employment and Workplace Relations, Brendan O’Connor, reminded reporters of Heydon’s close ties to the Liberal Party and insisted that any allegations of crime should be referred to the police not dealt with through a royal commission.

“What we’ve seen today, of course, is the culmination of $80 million of taxpayers’ money being spent on a political witch hunt in order to attack the opponents of the government,” he said.

“I want to remind people of the commissioner and his role very recently, of course, in accepting an invitation to speak at a Liberal Party fundraiser.”

Labor opposition leader, Bill Shorten, tweeted from vacation for Turnbull to bring on the election.

If Mr Turnbull and his Liberals want to fight an election on industrial relations, bring it on. We won on WorkChoices & we'll win again.

Labor and trade unions fear the government will use industrial relations legislation to remove or change workers’ weekend penalty rates. A productivity commission report recommending cuts to Sunday penalty rates has been sent to the Fair Work Commission by Cash.

“If there is a case for sensible and fair changes to the Fair Work framework, these will be clearly outlined and they will be taken to the next election and we will seek a mandate from the Australian people,” she told reporters earlier in December.

Minister for Resources, Energy and Northern Australia, Josh Frydenberg, also took to the airwaves on the final day of the year to tell the public that workplace reforms would be an election issue.

“We are prepared to take these issues to the Australian people at an election if we don’t get our legislation through the Senate,” he stated.

ABC 24: Josh Frydenberg says the government will take workplace reforms to the election.

Unions have vowed to, “throw everything including the kitchen sink” in opposing the changes. CFMEU National Secretary, Dave Noonan, questioned whether taking workplace relations to an election would change voters minds.

“It’s red meat to the zoo animals. It may help them with their base … [but] is it going to be a vote changer?” he told The Guardian.

With it’s long unionised history dating back to the 1891 shearers’ strike, Queensland is expected to be a major battleground ahead of the 2016 election. The Courier Mail fired its first salvo since the release of the royal commission report with a front page suggesting that all trade unions were unified by criminality. 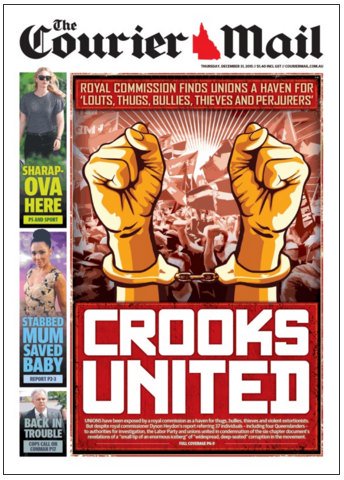